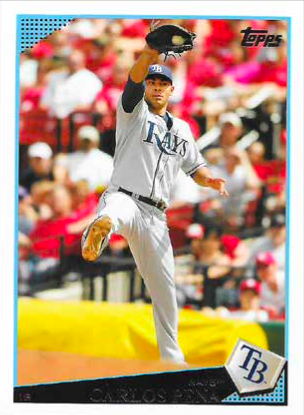 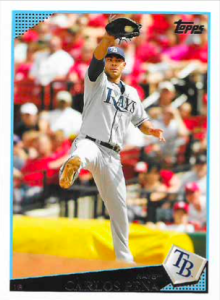 The Tampa Bay Rays, 6½ games behind the New York Yankees, were trying to stay in contention for the playoffs against the tough competition of the American League East. The Toronto Blue Jays meanwhile struggled after the opening month of the 2009 season and were looking to trade their pitching ace, Roy Halladay, after he announced that he would consider free agency at the end of the season.1

Halladay pitched nine innings the previous night and but failed to get a win. Rays starter Matt Garza was his equal, also going nine innings. The Rays eventually won the game when they scored two runs in the top of the 10th off reliever Scott Downs.

Amid the trade talk, the Rays were not one of the teams that were likely to land Halladay. Rays President Andrew Friedman told reporters, “[A]t the end of the day it’s going to take the guys that we have playing really good baseball for two months. We have a lot of confidence in the guys that we have and their ability to do that.”2

Toronto started Brian Tallet, who was 5-6 and had last won more than a month earlier, when he pitched six innings in a 7-5 Blue Jays victory. Tallet cruised through the first two innings, getting the Rays out in order.

Meanwhile his teammates were building an eight-run lead for him against Rays rookie starter David Price. Price hoped to rebound from his last start, a six-inning no-decision in which he surrendered four earned runs in a loss to the Chicago White Sox.

But Toronto jumped on Price immediately, scoring two runs in the first. Marco Scutaro led off with a single and scored on Adam Lind’s one-out double. Scott Rolen’s single left baserunners at the corners. Lind scored when Kevin Millar hit a weak groundball to short.

The Blue Jays added to their lead in the second. Jose Bautista led off with a home run. Three batters later, Aaron Hill hit another home run to give Toronto a four-run lead. One inning later, Alex Rios tagged Price for yet another round-tripper to put Toronto ahead by six runs.

Although Price didn’t return for the fourth inning, the Blue Jays tagged his replacement, Lance Cormier, for two more runs when Hill hit his second homer of the game. It was Hill’s 24th home run of the season and the second time in the season that he hit multiple round-trippers in a game. After scoring a pair of runs in each of the first four innings, Toronto led, 8-0.

Tallet kept Tampa Bay in check through the first five innings, allowing just two Rays to get on base. Tampa Bay finally got on the scoreboard in the sixth when Dioner Navarro doubled and scored on Melvin Upton’s single to left field.

Cormier got the Blue Jays out in order in the fifth but they added their ninth run in the sixth. Raul Chavez led off with a single and took third when Hill singled, his third hit of the game. A weak grounder up the middle led to an error by Rays shortstop Ben Zobrist that allowed Chavez to score.

Tampa Bay cut further into Toronto’s lead in the top of the seventh. A leadoff single by Evan Longoria and a double by Zobrist put two runners in scoring position. After Tallet walked Pat Burrell, Carlos Peña cleared the bases with a triple off the right-field wall. Brandon League replaced Tallet. Willy Aybar’s one-out grounder brought Peña home and suddenly the Rays were down by only four runs, at 9-5.

Rays manager Joe Maddon had moved Peña to sixth in the batting order for the game in an attempt to help him come out of a slump. The move seemed to work. Maddon said before the game, “This guy, he is so helpful to everybody in the clubhouse and sometimes somebody needs to be helpful to him.”3 Maddon told him he could help the team win with his words of encouragement or by his fielding, that it was not just about his bat.

Dale Thayer took the mound for the Rays in the bottom of the sixth to get the final two outs but before he could face a batter in the seventh, Maddon decided to make a pitching change. As he waited for Grant Balfour to jog in from the bullpen, he told his players gathered at the mound, “Don’t worry about it. We’re going to win this game.”4

Several days earlier, hitting coach Steve Henderson told the players that they needed to focus on quality at-bats. The Rays showed that they had heard him when they began their comeback in the seventh. “When we made it 9-5 it was like, ‘Hey, we’re within striking distance. We’re definitely not quitting,’” Zobrist said.5

The Rays continued to gain ground in the eighth. Jeremy Accardo was on the mound for Toronto. After giving up a leadoff single to Upton, he got the first two outs when Upton was caught stealing and Carl Crawford grounded out.

But the third out proved elusive. Longoria hit a groundball single up the middle. Accardo walked Zobrist and a passed ball put both runners in scoring position. Burrell worked the count full before hitting a single down the left-field line and suddenly the Rays were down by only two runs, at 9-7.

For the second night, Toronto sent Downs to the mound with the game on the line. The first batter he faced, Peña, sent the ball over the left-field fence to bring the Rays just one run away from a tie. After Downs struck out Gabe Kapler, Aybar stepped to the plate and pummeled the first pitch over the center-field wall to tie the game, 9-9.

It was the second time in as many nights that Tampa Bay had gotten to Downs, who was charged with a blown save. “For me, it’s embarrassing,” Downs said later. “Bottom line, it’s not executing. Yesterday I just beat myself and today it was bad location.”6

The Rays bullpen shut down the Blue Jays the rest of the game. After Balfour gave up a leadoff double to Scutaro in the eighth and retired Aaron Hill, Maddon replaced him with Randy Choate. Choate got the next batter out and was replaced by Dan Wheeler, who struck out Rolen, leaving Scutaro stranded on third.

Wheeler picked up the mantle and pitched a one-two-three ninth. After he surrendered a leadoff single in the 10th and a sacrifice put the runner in scoring position, Maddon replaced him with J.P. Howell, who snuffed out another Blue Jays scoring opportunity, striking out Scutaro and getting Lind to foul out for the third out.

Neither team scored in the 11th. Former Ray Shawn Camp, who came out of the bullpen in the 11th, stayed in the game. Zobrist singled to lead off the 12th. Camp got the next two batters to fly out but walked Gabe Gross. Jason Bartlett, who had entered the game in the ninth, followed with a line-drive double that barely stayed fair to bring Zobrist home with the tiebreaking run.

“It had a hook on it and I didn’t know what was going to happen. We’ve hit several balls recently just foul or somebody’s catching it over the wall. It was nice to have one hit a line,” Maddon said.7

All the Rays needed now were three outs to make their comeback complete. But they didn’t come easily. Joe Nelson, the seventh reliever called on by Maddon, struggled to get the job done. He walked Rios to start the inning. After a sacrifice left Rios on second, Nelson became so concerned with Rios stealing that he walked the next two batters to load the bases.

Nelson knew that starter James Shields was waiting in the bullpen. “I would have had to walk 30 to get him in,” Nelson said. He struck out Hill and then got Lind to ground out to second to end the game. “Never a doubt,” he cracked in the clubhouse afterward. 8

It was the biggest comeback in Tampa Bay’s history so far. Their previous best had come two months earlier when they were down seven runs by the fourth inning against the Indians but came back to win 8-7. That game was not quite the nailbiter; the Rays had added runs in the final four innings of that game to overtake Cleveland.

“We just didn’t quit today,” Zobrist noted as the team celebrated. Peña, whose bat came alive when he was moved in the batting order, said, “That was a great game for us, an incredible boost for our confidence.” But Nelson perhaps said it best: “Huge. Plain and simple, this could be one of those games you look back on.”9

Unfortunately for the Rays, the inspiration lent by this game was fleeting. They were 30-34 the rest of the season and finished 19 games behind the division-winning Yankees.

In addition to the sources cited in the Notes, the author used the Baseball-Reference.com, and Retrosheet.org websites for box-score, player, team, and season pages, pitching and batting game logs, and other pertinent material.