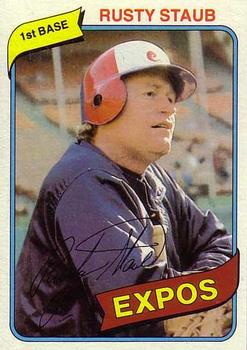 The largest crowd to witness a baseball game in Canada so far, 59,260 boisterous fans, jammed Montreal’s Olympic Stadium for a doubleheader between the Expos and Pittsburgh Pirates on July 27, 1979.1 The fans had plenty of reasons to be enthusiastic that evening. Not only were the Expos involved in the first real pennant race in their history, but the two teams ready to take to the field were locked in an epic season-long battle. But many in attendance were there to see Rusty Staub, the team’s first superstar, who was reacquired in a trade with the Detroit Tigers a week earlier and was set to play his first home game in an Expos uniform in almost eight years.

“Le Grand Orange,” as he was affectionately known, was more than a ballplayer to Montrealers — he was a folk hero.2 Staub originally came to the Expos in a trade with the Houston Astros in January 1969, just before the expansion team’s inaugural season. At the time of the deal, the under-appreciated 25-year-old was just entering his prime. Staub would go on to have the best years of his career in his three seasons with the Expos, making the All-Star team each summer.3 As of 2018, he remained the franchise leader in OPS+ with an impressive mark of 149, one point better than the 148 attained by Hall of Famer Vladimir Guerrero.4

Staub didn’t achieve his lofty status in Montreal by simply posting gaudy offensive numbers; it was what he did off the field that elevated him above all other professional athletes in the city. He lived in Montreal year-round and traveled across the country in the offseason promoting baseball, turning legions of Canadian children into lifelong fans of the game. In a Sports Illustrated article in the summer of 1970, John McHale, then president of the Expos, told the writer that “Rusty Staub did the greatest job of public relations for baseball that I have ever seen.”5 His genuine effort to learn and speak a bit of French also endeared him to a great many Quebecers. “I felt like a buffoon (initially),” Staub said decades later. “Eight-year-old kids would talk to me (in French), and I couldn’t answer. … (Learning French) was one of the best decisions of my entire life. It meant so much to me, to build that rapport between myself and the people of Montreal and Quebec. To this day, it still means a lot to me.”6

The fledgling Expos struggled in their first three seasons, posting an overall record that was a staggering 93 games below .500. To improve its fortunes, the club made the bold move of trading the popular Staub to the Mets just before the 1972 season for a trio of talented youngsters. The move caught everyone off guard; even Staub cried after learning that the Expos had shipped him to New York.7

By the time the 1979 season rolled around, the Expos bore little resemblance to the perennial losers that Staub had led in the franchise’s early years. In need of left-handed offense, Montreal reacquired Staub from the Tigers on July 20. Although he was now 35 years old and a few pounds heavier than the last time he wore an Expos uniform, Staub could still swing the bat and was coming off a season in which he was one of the best designated hitters in the American League.

Expectations were high among Expos fans coming into the July 27 doubleheader. Their team had been playing great baseball at home all season long, racking up an imposing 31-12 record at Le Stade Olympique. Montreal started the evening with a two-game lead over the Cubs and a 2½-game edge on the Pirates in the Eastern Division.

Expos fans would have to wait a bit longer for Staub’s return, as he was left out of the starting lineup for the first game of the twin bill. Ross Grimsley, a 20-game winner in 1978, took the mound for Montreal, while Pittsburgh countered with 22-year-old Don Robinson.

The Expos looked jittery in the top of the first inning, with errors on the first two balls put into play leading to a pair of unearned runs for the Pirates. Montreal bounced back to tie the game in the bottom of the second inning on a two-run home run by Larry Parrish, his 12th round-tripper of the season.

With two out in the top of the fourth, Phil Garner hit a solo shot off Grimsley to put the Bucs back on top, 3-2. The Expos answered right back in the bottom of the inning. After Ellis Valentine stroked a two-out single to center field, Parrish notched his third RBI of the game with a double that knotted the game again.

The score remained tied until the top of the seventh inning. Garner and Bill Madlock opened the inning with singles and then catcher Steve Nicosia singled home the go-ahead run to chase Grimsley from the game. Expos manager Dick Williams summoned Elias Sosa from the bullpen and the veteran right-hander prevented the Bucs from doing any more damage in the inning.

Warren Cromartie singled to right field to open the bottom of the seventh and was sacrificed to second by the light-hitting Rodney Scott. With Andre Dawson coming to the plate, Pirates manager Chuck Tanner yanked Robinson and brought in his primary closer, the right-handed side-armer Kent Tekulve. After retiring Dawson on a fly ball for the second out, Tekulve got Tony Perez to hit a slow roller to Garner at third.8 Instead of putting the ball in his back pocket, Garner made a wild throw to first that allowed Cromartie to score, tying the game at 4-4.9

Garner continued to be in the thick of the action in the top of the eighth inning, this time coming to the plate with two outs and runners on first and second. On a 3-and-2 pitch from Sosa, Garner hit a ball softly in front of the plate for what might have been the third out of the inning, but umpire Charlie Williams ruled that the ball was foul because it had struck Garner’s foot while he was in the batter’s box.10 Not surprisingly, the vehement objections of Williams and catcher Gary Carter did nothing to change the call. On the very next pitch from Sosa, Garner lined a single to right field to score Dave Parker from second and put the Bucs ahead, 5-4.

Expos fans finally got what they came for in the bottom of the eighth. After a two-out walk to Tony Bernazard, Staub emerged from the dugout to pinch-hit for Sosa, immediately triggering a thunderous standing ovation. Tanner motioned for the southpaw Grant Jackson to come into the game to face Staub. The ovation continued as Jackson warmed up, with Staub waving to the fans on two separate occasions, amplifying the cheers both times.11 After Jackson had finished his warm-up tosses, “Le Grand Orange” raised his batting helmet to acknowledge the crowd, which increased the decibel level within Olympic Stadium even further. The public-address announcer, realizing the futility of introducing Staub under such noisy conditions, made no such attempt.12

With the standing ovation still going strong, Staub stepped into the box and swung at the first offering from Jackson. Much to the chagrin of Expos fans, Staub swung under the pitch and sent a harmless pop fly into shallow right field to end the inning. The applause continued for a few moments after the out was made, finally dying out roughly five minutes after Staub first approached the on-deck circle.13 “What the fans did during the delay was probably one of the more emotional things that ever happened to me in my life,” Staub recalled in a 2012 interview before his induction into the Canadian Baseball Hall of Fame. “It just kept going on and on, I didn’t know where to go with it. I tried to keep my composure. It was one of the few times I really had to fight to keep my act together.”14

The Pirates certainly had their act together that evening. After Enrique Romo shut down the Expos in the ninth inning to seal their 5-4 victory, the Bucs went on to thump Montreal, 9-1, in the nightcap to complete the doubleheader sweep. The following evening, Pittsburgh moved into the division lead for the first time all season with a third consecutive win over the Expos, although Staub redeemed himself with a pair of RBI singles in the series finale to help Montreal regain the top spot in the National League East with a 5-3 victory.

1 The attendance for the July 27, 1979, doubleheader surpassed the previous record of 57,592, which was set two years earlier in the first major-league game played at Olympic Stadium. The record lasted less than two months. A September 16 twin bill between the Expos and the St. Louis Cardinals drew 59,282 fans, a franchise record that still stood in 2018.

2 The nickname “Le Grand Orange,” a French version of Rusty, referred to Staub’s red hair. The moniker was given to him by Ted Blackman of the Montreal Gazette in 1969.

4 OPS+ takes a player's on-base plus slugging percentage (OPS) and normalizes the number across the entire league. It accounts for external factors like ballparks. It then adjusts so a score of 100 is league average, and 150 is 50 percent better than the league average.

8 Phil Garner started the game at second base and moved to third base after Bill Madlock was removed for a pinch-runner in the top of the seventh inning. Madlock was playing the game with a hamstring issue.