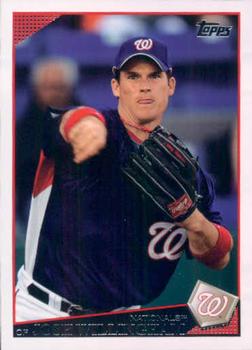 July 27 is a date that will forever be linked to grand-slam history. On July 27, 1946, Boston’s Rudy York hit two grand slams in a game. Exactly 63 years later, on July 27, 2009, Washington Nationals right fielder Josh Willingham matched that feat, becoming the 13th player to do so.

In two consecutive at-bats, Willingham hit bases-loaded home runs. Of his 14 previous home runs in the 2009 season, 12 had been solo shots. No batter in the league with 12 or more home runs had fewer runs batted in. (He had 31 coming into the game.) After the game, Willingham said simply, “It’s one of those things that you can’t explain.”1

Washington had many chances early in the game. Runners reached second base in each of the first four innings, but the team didn’t score. Nationals batters were 0-for-9 with runners in scoring position. The Brewers had a little more success. In the bottom of the first inning Felipe Lopez led off with a single. Craig Counsell lined out and Ryan Braun drove a double to left field. Lopez tried to score but was tagged out at the plate. Braun went to third on a wild pitch by Washington starter Craig Stammen, and he trotted home when Prince Fielder doubled to left. Milwaukee added a second run in the second inning, as Corey Hart smashed a leadoff solo home run deep down the left field line.

All that changed in the top of the fifth inning. Leadoff batter Alberto Gonzalez doubled to left. Stammen sacrificed him to third, and Nyjer Morgan singled Gonzalez home. Cristian Guzman followed with a single to right and Ryan Zimmerman was beaned by a pitch from Jeff Suppan. With the bases loaded, Adam Dunn hit a shot deep down the right-field line, but it hooked foul. Then he walked, getting an RBI. Nick Johnson struck out looking, and Willingham took his turn at the dish. He drove the first pitch from Suppan beyond the left-center-field fence. It struck the facing of the second deck, about 400 feet from home plate. The blast gave the Nationals a 6-2 lead.

The Brewers rebounded with three runs in the bottom of the fifth. Stammen gave up a double to Jason Kendall and Suppan sacrificed him to third. Lopez singled, and after Counsell flied out, Lopez advanced to second on a Stammen wild pitch. Braun launched a home run deep beyond the center-field fence. Fielder singled and Washington manager Jim Riggleman sent Stammen to the showers. Jason Bergmann came on and struck out Mike Cameron.

In the top of the sixth, Washington again came a-knockin’. Gonzalez started the inning with a walk and moved up a base on Bergmann’s bunt. Morgan singled and Guzman stroked a double down the right-field line, driving in Gonzalez and Morgan. Suppan intentionally walked Zimmerman, and Mitch Stetter came on in relief. He gave up a ground-rule double to Dunn. Guzman came home, and Zimmerman had to stop at third. Johnson drew a walk. Brewers manager Ken Macha then brought in Mark DiFelice to pitch. Willingham again approached home plate with the bases loaded. He knocked an 0-and-1 fastball over the wall in left-center again, this time into the fence above the Brewers’ bullpen, increasing Washington’s lead to 13-5. Someone retrieved the ball for Willingham. After the game, it was on display in his locker with “Second Slam Same Game” inscribed on it.2 Willingham described both home runs as “driving-range shots,”3 and called them a defining moment for him and his team: “That’s the beautiful thing about baseball. You never know what can happen.”4 He had eight RBIs in back-to-back at-bats in consecutive innings.

The Brewers plated a single run in the bottom of the sixth, as pinch-hitter Jody Gerut doubled in Kendall, who had walked. That was the last run scored by Milwaukee.

In the eighth inning Willingham was due up fourth. Teammate Ryan Zimmerman led off the inning with a solo home run. Willingham joked, “I told Zimmerman I was like, ‘Well, get on for me so I have a chance to hit with the bases loaded again.’ Then he hits a home run and I said, ‘Why’d you do that?’”5 Willingham struck out, and then Austin Kearns replaced him in left field in the bottom of the eighth.

After the game Willingham told reporters, “It’s something that, when I was coming up to the plate the second time, I knew I had a chance to do it. Obviously, I wasn’t thinking about doing it; I wasn’t trying to do it. But when the game is over and you look back on it – for years to come, when I look back on it – it’s going to be something that will be very special.”6 He added, “I was just trying to get a good pitch to hit and hit it hard.”7 Fans can see the highlights by clicking here.

Milwaukee starter Suppan was tagged for 10 runs on 10 hits and 4 walks in 5? innings. Braun and Lopez had three hits each for the Brewers. Washington’s Stammen gave up five earned runs in 4? innings, and reliever Bergmann earned his first win of the season.

With his 3-for-5 performance, Willingham raised his average 7 points and his slugging percentage 31 points. Describing his performance, he said, “You don’t get the opportunity to do that many times, much less come through in both situations.”8 He tied the Nationals franchise record with the eight RBIs in one game (accomplished last by Montreal’s Tim Wallach against San Diego in 1990.)9 He was on his way to the third 20-plus-home-run season of his career.

A decade earlier, on April 23, 1999, Fernando Tatis of the St. Louis Cardinals had become the 10th player to hit two grand slams in a game, hitting both in the same inning against the Los Angeles Dodgers. On the night of Willingham’s achievement, Tatis also hit a grand slam, a pinch-hit shot, to lead the New York Mets over the Colorado Rockies, 7-3.10