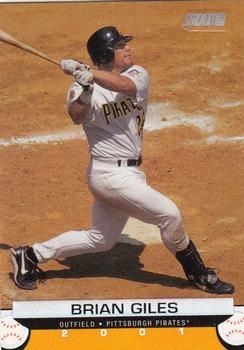 As 32,977 patrons filed into PNC Park on Saturday, July 28, 2001, some knew that they were going to be part of a notable day for the Pittsburgh Pirates, but no one expected the real reason why the day would be unforgettable.1 Most knowledgeable fans thought it was because the Pirates were about to play the day game of the first day-night doubleheader in the team’s history. Others were excited because it was their first trip to their team’s beautiful new ballpark. However, no one imagined that the day’s lasting memory would instead come with two outs in the bottom of the ninth inning.

The Astros came into Pittsburgh locked in a battle with the Chicago Cubs for first place in the National League Central Division. During the previous six years, Houston had the best record in the division, winning three of the previous four division championships. On the other hand, the Pirates were trying to stay out of the division’s cellar. It had been 10 years since Pittsburgh finished the season with a winning record. They were already 23 games under .500, and there was no doubt that 2001 would be the 11th year.

The game began uneventfully. The Astros went down in order in the first inning as did the home team. On the mound were two young right-handed hurlers. Bronson Arroyo, the Pirates pitcher, had been recalled from Triple-A Nashville the day before. He started the season in Pittsburgh but had been pitching for the Sounds since an ugly loss to the Philadelphia Phillies on June 20. Carrying a hefty 6.24 ERA and a 3-6 won-lost record, Arroyo hoped the game against the Astros would keep him in Pittsburgh. Meanwhile, Roy Oswalt was establishing himself as a potential Rookie of the Year candidate.2 He began the season in the Astros bullpen but became part of the starting rotation in early June. He brought an impressive 8-2 record and 3.39 ERA into the game.

Vinny Castilla led off the second inning for the Astros by launching his 13th home run of the season. Houston had signed Castilla two months earlier as a free agent, after he was released by the Tampa Bay Devil Rays. A 10-year veteran, the slugger was expected to bring some additional punch to the middle of an already potent Astros lineup. He did not disappoint. Since coming to Houston on May 15, he had hit 10 home runs, driven in 43 runs, and was hitting at a .280 clip.3

In the bottom of the inning the Pirates matched the Astros’ production. Left fielder Brian Giles led off with a double to center field. Two outs later Kevin Young smacked a single to left field, scoring Giles. Since coming to Pittsburgh from Cleveland two years earlier, Giles had quietly established himself as one of the better hitters in the National League. Along with third baseman Aramis Ramirez and catcher Jason Kendall, he was counted on to drive the Pittsburgh attack in 2001. Carrying a .323 average with 24 home runs and 62 RBIs, Giles was living up to those expectations.4

After a scoreless third, Castilla opened the Astros fourth with another towering drive to deep left-center field. Giles raced back to the wall, leaped, gloved the ball, and pulled it back into play, robbing Castilla of his second home run. After the game the left fielder said, “It would have landed in the front row, I think. … Here you can’t give up on the ball. It was hit high. Those are really the only balls you have a chance to bring back.”5 Aided by Giles’ spectacular catch, Arroyo labored through the rest of the inning, giving up a single, two walks, and a wild pitch before escaping a bases-loaded threat when Oswalt flied out.

The fifth inning did not turn out as well for the Pirates pitcher. Leadoff hitter Craig Biggio singled and was sacrificed to second by shortstop Julio Lugo. Lance Berkman followed with a single that got Biggio to third. Into the batter’s box stepped Castilla for the third time and for the third time he launched a missile to left field. This time it could not be brought back and the Astros took a three-run lead, 4-1.

Both starters were gone by the end of the seventh inning. Oswalt’s departure came after the Pirates scored a run and had men on second and third with one out. Nevertheless, he left confident that his ninth win was just two innings away. “I counted it as a win,” he said after the game.6 Southpaw Ron Villone came in and quickly put out the fire. During the Pittsburgh rally, Warren Morris, a left-handed hitter batting .154, pinch-hit for Arroyo. When Pirates manager Lloyd McClendon saw that Oswalt was being lifted in favor of Villone, he pulled Morris and sent to the plate right-handed Craig Wilson, who was batting.300. But Wilson struck out and leadoff hitter Tike Redman flied out to center. Meanwhile, Arroyo’s exit ended the next day back in Nashville.7

The Pirates reliever, Omar Olivares, did not fare as well as Villone. A journeyman right-handed pitcher who was in his 12th and final major-league season, Olivares came into the game with a 6.80 ERA. He was immediately greeted by Castilla, who hammered his third home run of the day into the left-field stands. Only a perfectly timed leap by a self-described “short, fat guy” separated Castilla from a truly historic day of his own.8 Houston added its sixth run of the day before its half of the inning ended.

Right-handed relief pitcher Michael Jackson, who picked up for Villone in the bottom of the eighth, quickly dispatched the three Pirates hitters he faced. In the ninth, with Olivares still on the mound, the Astros scored twice more, pushing their lead to six runs, 8-2. The only redeeming moment for Olivares was a swinging strikeout of Castilla.

The Pirates’ ninth began the way the eighth had ended. Jackson got third baseman Ramirez to fly out to deep left and Johnny Vander Wal on a fly to center. It was then that lightning struck. Kevin Young, who already had a hit and both of the Pirates’ RBIs, lashed a double to left. The eighth hitter in the lineup, second baseman Pat Meares, followed with his fourth home run of the season and the last in his career. Still down 8-4, manager McClendon sent up light-hitting Adam Hyzdu to bat for Olivares. Hyzdu singled. Tyke Redman followed with a walk. Hyzdu then scored the Pirates’ fifth run on a single by shortstop Jack Wilson.

With his team’s lead slipping away, Astros manager Larry Dierker called in his stopper, Billy Wagner. One of the preeminent relief pitchers in the major leagues, Wagner already had 24 saves. A southpaw with a fastball that periodically clocked in at 100 mph, he could be intimidating. Jason Kendall was the first Pirate to face Wagner. During the winter Kendall had signed a six-year, $60 million contract. The catcher’s season had not lived up to his new salary. His batting average had fallen by 68 points and his power numbers further reflected the decline. With the Astros just one out away from the win, Wagner’s third pitch drilled Kendall in the leg, loading the bases for Giles.9

Giles became the ninth Pirates hitter in the inning. In his only previous appearance against Wagner, Giles had struck out. The lefty-versus-lefty matchup certainly favored the pitcher. Giles went to the plate looking for an inside pitch that he could just put into play. “When a guy is throwing that hard, you don’t want to try to do too much,” he said after the game.10 On Wagner’s second pitch, Giles got what he wanted. He turned on the pitch and crushed a screaming line drive into the right-field stands. Of the swat Giles explained: “I never give high fives to (first-base coach) Tommy Sandt. But I knew it was gone.”11 Pittsburgh’s incredible comeback was complete. Only once before in the National League, on June 29, 1952, when the Cubs defeated the Reds 9-8 in the first game of a Crosley Field doubleheader, had a team with two outs in the bottom of the ninth inning rallied back from being six runs down to win.12 Giles’ grand slam duplicated the feat.

As they left PNC that afternoon with fireworks bursting overhead, the happy Pirates fans probably again admired their team’s picturesque new ballpark. They certainly remembered Castilla’s three home runs and the catch that robbed him of a fourth; but no doubt their most lasting memory was of Brian Giles’ grand slam that transformed a memorable game into an unforgettable comeback.

2 Oswalt finished second to Albert Pujols in the National League Rookie of the Year voting.

9 Kendall was the first batter Wagner hit in 2001.