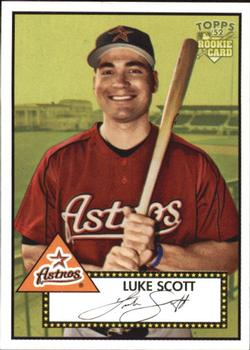 When the Houston Astros called their Triple-A affiliate, the Round Rock Express, to send Luke Scott up to the majors on July 13, 2006, they “hoped he would be able to provide a spark for their struggling offense.”1 The Astros were six games below .500 and 10½ games out of first place in the National League West. The new Houston outfielder made an immediate impact, going 1-for-2 in a game against the Florida Marlins. After his first 10 games at the big-league level (he started in five), he was batting .346, and then, on July 28, the 28-year-old rookie Scott hit for the cycle, including swatting his first major-league home run, giving manager Phil Garner “no reason to send him back to the minors.”2

Garner called on Brandon Backe to toe the rubber for the Astros in a Friday night game against the Diamondbacks. Backe was making only his second start since mid-April, when he went on the disabled list for a sprained right elbow. Arizona skipper Bob Melvin gave the nod to Enrique Gonzalez, a rookie righty making just the 10th start of his career. Both pitchers made it safely through the first two innings, but when each had to face the batting order a second time, trouble started.

After Backe struck out Enrique Gonzalez to start the top of the third, he walked Jeff DaVanon. Then Conor Jackson, Luis Gonzalez, and Chad Tracy hit back-to-back-to-back singles. DaVanon and Jackson scored and Arizona had a 2-0 lead. The D-backs added a run in the fourth, after Orlando Hudson and Stephen Drew each singled. Enrique Gonzalez’s bunt attempt forced Hudson at third, but Jackson stroked a single to left with two outs to plate Drew.

The rookie Gonzalez couldn’t hold the advantage. Mike Lamb led off the Houston half of the fourth with a single. Aubrey Huff’s groundball made it through the right side of the infield. Preston Wilson struck out and Scott came to the plate. The Minute Maid Park crowd of 43,201 “chanted ‘Luuuuuuuuuuuuuuke’ each time Scott came to the plate.”3 He had grounded to second in his first at-bat, but with runners on first and second in the fourth, he delivered, depositing the ball over the fence for a three-run, game-tying homer. Gonzalez loaded the bases on singles to Adam Everett and Backe and a hit batsman (Willy Taveras), but Craig Biggio lined out to left, stranding the three runners.

The two teams kept trading runs. Arizona’s Tracy doubled to start the fifth and scored on Shawn Green’s single. Houston’s Huff doubled with one out and scored when Scott checked the tripleoff his cycle list in the fifth inning.DaVanon walked to start the sixth and came around with the go-ahead run when Jackson doubled to deep right with his third hit of the game. This chased Backe and Russ Springer came on in relief. He retired the next three batters and was replaced by Chad Qualls in the seventh. The Astros had two runners on with only one out in the sixth, but Gonzalez induced Biggio to hit a grounder to short for a double play, as the umpires ruled interference by Taveras on his way to second.

The game remained close. With Hudson on first and two outs, Melvin inserted Carlos Quentin as a pinch-hitter for pitcher Gonzalez in the seventh, and Quentin hit the first pitch from Qualls out of the park. Arizona now led, 7-4.

Randy Choate entered as the new Arizona hurler in the bottom of the seventh, but he faced only two Houston batters, retiring Lamb and walking Huff. Brandon Medders then came on to face Wilson, giving the desired righty-righty matchup, but Wilson worked a full count and then walked. Left-handed-swinging Scott took a strike from Medders and then lined a drive to deep right for a double, knocking in Huff and sending Wilson to third. Wilson came home on a Brad Ausmus groundout to second. The Astros had trimmed the lead to one run, and an inning later, Taveras reached on an error and took third when Biggio singled. Lamb lofted a fly ball to left and the sacrifice fly tied the game yet again.

The Astros had their hot rookie come to bat to lead off the bottom of the ninth. Scott grounded a 2-and-2 pitch to the second baseman Hudson, and Ausmus and Everett were both retired, sending the game into extra innings.

A total of five more pitchers came into the game, with Houston’s Andy Pettitte throwing the top of the 11th. He yielded a double to Gonzalez, and the visitors capitalized on small ball. Gonzalez took third on Tracy’s grounder to the right side and scored when Johnny Estrada hit a sacrifice fly to left. Now it was up to another Arizona rookie pitcher, Tony Pena, to save the game for the Diamondbacks. Pena was in his fourth game and had given up one earned run and only three hits in his previous 5⅔ innings pitched.

Pena had pitched a scoreless 10th and had retired the first batters in the 11th. Scott came up for the sixth time, needing a home run to tie the game. Instead, he singled and was stranded on the bases as Lance Berkman, pinch-hitting for Ausmus, grounded out to first for an unassisted putout, ending the game. The single gave Scott a cycle, but the Astros lost the game. Of the accomplishment in that circumstance, Scott said, “You think about it, but at the same time, a home run can win the ballgame. I’d much rather have a home run (in that situation) than a single, double or triple.”4

Still, Scott was pleased with the cycle, telling reporters after the game, “It’s a pretty awesome feat, (once) you think about it. It’s a great blessing, and I enjoyed it. I would have really enjoyed it more had we won.”5 The Diamondbacks players were also impressed. Catcher Estrada commented, “We couldn’t get that guy out. We threw him everything and the kitchen sink today. He was just spitting on the bad pitches, being patient up there and hitting the ball all over.”6 Arizona outfielder Luis Gonzalez added, “In our meeting we went over him briefly. I guess tomorrow we’ll go over him a little more.”7

As far as his future with the big club was concerned, Scott said, “I’ve just come up and do my best to help the team win. I (try) to fulfill my role, which is to hit the ball hard and play good defense. It’s a team game, and I just want to do my part.”8

With his five runs batted in, Scott tied a team record for rookies, set by Chris Truby on September 15, 2000.9 His batting average jumped 60 points to .406 and his slugging percentage increased to .688. Scott played in 65 games for Houston in 2006, starting in all but four after this historic game. He batted .336 and belted 10 homers, playing a big part in Houston’s surge to second place.10 Huff had gone 2-for-3 with three walks to help the Astros’ cause, but it was not enough. Hudson (4-for-5) and Jackson (3-for-6) paced the Arizona attack. Nine different batters combined for the 17 D-backs hits.

Scott’s cycle, the seventh in team history, came four seasons after Biggio accomplished the rare feat in a game against the Colorado Rockies (April 8, 2002). Since Scott’s achievement, Brandon Barnes hit for the cycle on July 19, 2013, in a game the Astros lost to Seattle, 10-7. Scott became just the eighth major leaguer to hit for the cycle in reverse natural order, meaning he hit the home run first, then the triple, the double, and the single. The first instance of a reverse natural cycle was accomplished by Henry Larkin, on June 16, 1885. Since Scott’s cycle, two more players have hit for the cycle in reverse natural order: Minnesota’s Carlos Gomez on May 7, 2008, and Cleveland’s Rajai Davis on July 2, 2016.

Still, the Astros could not celebrate Scott’s hitting display with a victory, and their “clubhouse was subdued.”11 This was the ninth loss since the All-Star break (against only five wins). Pettitte failed in his first relief appearance since the 1998 season when he was with the New York Yankees. His record dropped to 9-11. The Diamondbacks picked up their sixth win in their last nine games.

10 Houston had a record of 33-24 in August, September, and October, and the Astros finished the season just 1½ games out of first place.