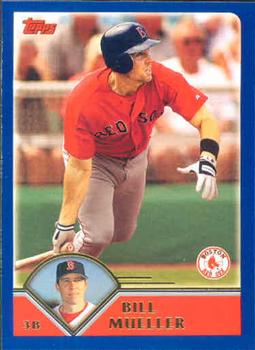 On July 29, 2003, a pair of knuckleballers faced off in the 97–degree heat of Texas. The Boston Red Sox sent Tim Wakefield to the mound against the Rangers’ R.A. Dickey. The hero of the day was the Red Sox eighth-spot hitter, third-baseman Bill Mueller. Before a crowd of 24,632, Mueller hit three home runs, two of which were with the bases loaded.

Boston entered the contest a game and a half out of first place in the American League Eastern Division, while Texas was in last place in the AL West, 20 games behind the Mariners. The Rangers jumped out to an early lead in the bottom of the first. Michael Young swung at a third strike, but Red Sox catcher Doug Mirabelli could not smother the knuckler by Wakefield, and the passed ball allowed Young to scamper to first base. He moved to second on a walk to Hank Blalock and scored after two ground ball outs. Texas had a 1-0 lead without a base hit. The Rangers added another run an inning later, again taking advantage of two more Mirabelli passed balls, and Young drove in Doug Glanville with a single to left, making the score 2-0.

Leading off the top of the third and batting left-handed, Mueller hit a solo home run against Dickey. Boston then loaded the bases with one out, but Dickey struck out Manny Ramirez and David Ortiz to end the threat. Texas answered with a run in their half of the third. After singles by Alex Rodriguez and Rafael Palmeiro, Mark Teixeira grounded into a double play, but Rodriguez scored from third. The Sox used the solo long ball to notch a second run in the top of the fourth when Trot Nixon hit a one-out homer, again cutting the Rangers lead to one run. Glanville sent a sixth-inning offering from Wakefield over the fence, and Texas led 4-2. That would be Wakefield’s last inning. He allowed four runs (two earned) on six hits and two walks in six innings, but he had thrown 102 pitches. His counterpart Dickey was replaced by Erasmo Ramirez to start the Boston sixth, after a 97-pitch outing.

Ramirez allowed a one-out single to Todd Walker in the seventh, and Texas skipper Buck Showalter went to the bullpen, bringing in Rosman Garcia to face Nomar Garciaparra. The Red Sox shortstop drew a walk. Gabe Kapler (he replaced Manny Ramirez in left field in the fifth inning) drove in Walker with a single and then Ortiz followed with a double down the right-field line, plating Garciaparra and Kapler. After Garcia walked Kevin Millar, Aaron Fultz was called in as the third Texas pitcher of the inning. Fultz walked Nixon to load the bases, bringing up Mueller, who now switched to batting right-handed against the southpaw Fultz. Mueller crushed a 2-2 pitch and sent it deep to straightaway left field for a grand slam, giving Boston a 9-4 advantage.

An inning later, Boston rallied again. Garciaparra, the last batter to have hit two grand slams in the same game, hit a one-out home run for Boston’s 10th run of the game. Kapler drew a walk and Ortiz struck out. Jay Powell, a right-hander, was given the mop-up duty and came on to replace Fultz. He allowed a single to Millar and a walk to Nixon, again loading the bases for Mueller, who blasted his third homer and second grand slam, this time batting left-handed again. Five runs on just three hits. After the game, Mueller said, “It was just a night when I tried to go out and do what the guys did in front of me, have good at-bats and battle.”1

Texas added two runs in the eighth and another in the bottom of the ninth, but it was not enough. Boston won for the eighth time in the past 10 games, to stay 1 1/2 games behind the New York Yankees. Wakefield picked up his eighth win of the season. Red Sox catcher Mirabelli was charged with four passed balls, all in trying to tackle Wakefield’s knuckleballs. This was only two short of the American League mark set in 1987 by Texas backstop Geno Petralli.2

In 2003, Mueller led the American League in batting, with a .326 mark, winning a Silver Slugger Award for third basemen. He set career highs in doubles (45) and home runs (19). In 1999, the season of his two-grand-slam feat, Garciaparra also led the junior circuit in batting.Back in the clubhouse, Mueller told reporters, “You never come to the ballpark thinking you’re going to do anything like this. I’m just trying to have some good at-bats, and I guess some of my good at-bats went over the wall tonight.” He continued, “I’m very humbled by it. It was just one of those nights that went in my favor and kept going. Maybe someday I’ll really appreciate it….I felt good. I’m ready to go [at] them tomorrow.”3

Even Texas manager Showalter chimed in on Mueller’s achievement. “Part of you appreciates seeing someone perform at that type of level,” Showalter said. “You just don’t want to see it against you. He’s been a good, gutty player for a long time. It’s quite a feat.”4

With the introduction of the website MLB.com, fans can now view the Mueller home runs (click here).5

The author thanks Lisa Tuite of the Boston Globe Library for her assistance with obtaining sources.