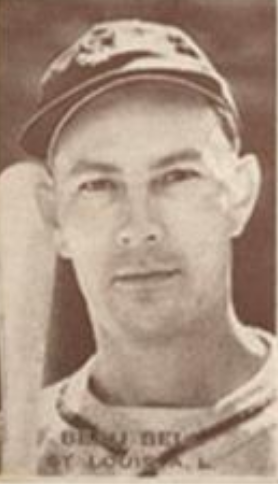 It has been said that one of the great things about baseball is that in any given game you’ll see something that has never happened before. That may not be literally true, but it was true for the 7,922 fans who came to Sportsman’s Park to watch the fifth-place Detroit Tigers and the eighth-place St. Louis Browns meet in a Sunday doubleheader on July 3, 1938.

The game started out as a brilliant pitchers’ duel with neither team so much as threatening to score through the first two innings.

Browns catcher Billy Sullivan got the first hit of the game when he led off the third inning with a single. Kennedy proceeded to pick Sullivan off first base. But Don Heffner drew a walk. Hildebrand laid down a bunt. Hank Greenberg fielded the ball and tried to throw to second base for the force out. But the throw went into center field and the Browns had runners on second and third with one out. Mel Almada lined to Jo-Jo White in center field, Sullivan tagged up from third and scored, and the Browns had a 1-0 lead.2

The score remained 1-0 through six innings as Hildebrand held the Tigers to only two hits,3 helped in part by some terrific defense behind him. In the fourth inning, for example, Sullivan chased a foul pop from White into the bat rack in the Browns dugout. Sullivan “glided over the bats as though he were playing a xylophone with his feet” and made the catch.4

The Tigers finally broke through against Hildebrand in the seventh inning. Charlie Gehringer led off with his second double of the game. He advanced to third base on Rudy York’s fly out and scored on Greenberg’s single to center field.5

The Browns failed to score in their half of the seventh and both teams went quietly in the eighth inning. So, the game went to the ninth inning tied at 1-1.

The Browns’ Harlond Clift led off the bottom of the ninth inning with a single. Beau Bell sacrificed him to second base, but Greenberg made “a swell stop” of a Red Kress line drive and the Browns failed to score, sending the game to extra innings.6

Dixie Walker was retired by Hildebrand leading off the top of the 10th inning. By this point the teams had combined to score two runs on nine hits while making 55 outs. And then, suddenly, the clock struck midnight and Hildebrand and Kennedy turned into pumpkins.

Don Ross singled. Mark Christman ran for Ross and pitcher Kennedy singled him to second base. White walked, loading the bases. Billy Rogell promptly unloaded the bases with a triple to right field. Gehringer became the fifth consecutive Tiger to reach base, singling Rogell home to give the Tigers a 5-1 lead. Gehringer was out trying to stretch his hit to a double and Rudy York made the third out of the inning, making York the only one of the final 12 batters of the game who failed to reach base.7

The Tigers took the field in the bottom of the 10th inning needing only three outs to secure the win. They wouldn’t even get one. Heffner walked. Buster Mills hit for Hildebrand and singled. With two runners on base and nobody out, the Tigers replaced Kennedy with Tommy Bridges. Almada greeted Bridges with an RBI single to make the score 5-2. George McQuinn walked, loading the bases. Clift singled to make the score 5-3 and leave the bases loaded.8 That brought Beau Bell to the plate. Bell matched Rogell’s heroics from the top of the 10th. He hit a drive over White’s head in center field. The ball was hit so well that White did not even bother to return the ball to the infield as Bell pulled into third base and all three baserunners scored to give the Browns an improbable 6-5 win.9

10 This does not include this game. Retrosheet was scheduled to release the play-by-play for this game in its Fall 2018 release.