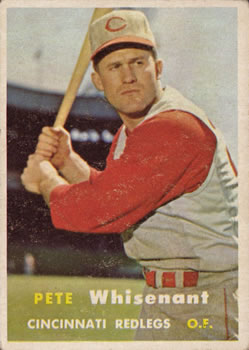 Baseball history buffs would love to hop on a time machine and head to Cincinnati’s Crosley Field for the Redlegs’ July 31, 1958, incredible comeback against the San Francisco Giants.1 If H.G. Wells’s imaginary invention were a reality, the lucky time travelers would have seen an exciting game that included several famous footnote players who were noted for singular achievements rather than great careers, as well as a game-winning hit by a pinch-hitter who couldn’t hit right-handers with a two-by-four.2 And with only 7,492 in attendance on a threatening night, tickets were easy to come by.

The 1958 season was a watershed for the National League. Brooklyn fans were still crying over the departure of their beloved Bums to Los Angeles, while the Giants were adapting well to life on the Left Coast. The westward move had the two teams going in different directions in more ways than one. The Giants loved the California lifestyle. They finished their final Polo Grounds campaign with a 69-85 record, 26 games out of first, but at game time against the Redlegs, they were in second place with a 54-44 record, just a half-game in the standings behind the defending World Series champion Milwaukee Braves. After finishing third with an 84-70 record in 1957, the Dodgers occupied the National League basement at 44-53 as action began on July 31. Conversely, the Redlegs hadn’t moved anywhere, and were a middle-of-the-pack team with a 48-49 record.

One reason for the Dodgers’ record was the terrible pitching of longtime mainstay Don Newcombe. Newk had gone 0-6 for LA, with a 7.86 ERA, which prompted a trade to the Queen City on June 15 and explains why he could start for the Redlegs on this night. Giants starter Al Worthington spent the 1958 season ping-ponging between the bullpen and the starting rotation.

Newcombe had gone only 2-4 since joining the Redlegs, but he had sliced two full runs off his ERA, which was 5.44 at game time.3 In this game Newk had a relapse of LA-itis, as the Giants jumped on him for four third-inning runs on four hits. Willie Kirkland hit a one-out single and, after Willie Mays flied out, Ray Jablonski drove Kirkland home with a double to right-center. Orlando Cepeda singled Jablonski home, then Leon Wagner homered to make it 4-0 and bring Newcombe’s night to an end. Brooks Lawrence came in and got Daryl Spencer on a fly to left to end the inning.

Fans attending the game from the future would see their first notable in the bottom of the third, albeit in unusual circumstances. Harvey Haddix, famous for pitching 12 perfect innings for the Pittsburgh Pirates against the Braves in 1959, pinch-hit for Lawrence in the bottom of the fourth. He struck out.4

Perhaps Redlegs manager Birdie Tebbetts should have called on Haddix for his pitching skills. Instead he called on Willard Schmidt for the fourth, who got the number eight and nine hitters without any problems, but then walked Danny O’Connell and gave up a two-run homer to Kirkland, giving the Giants a 6-0 lead.

But it was still early, and the Giants decided to make things interesting by giving Cincinnati three unearned runs in the bottom of the inning. With one out, Worthington walked George Crowe, gave up a double to Jerry Lynch, then walked Ed Bailey to load the bases. Don Hoak smacked a ball that bounded through Daryl Spencer’s legs at short, scoring Crowe and Lynch and moving Bailey to third. Roy McMillan hit a sacrifice fly to score Bailey with the third run of the inning. The score at this point was 6-3, but the fun was just beginning.

The teams traded runs in the sixth. Bob Schmidt doubled to left-center to lead off the top of the inning, and scored two outs later on a Kirkland single. Cincinnati returned the favor in its half, when Hoak doubled and, after McMillan walked, scored on a Smoky Burgess two-bagger. Burgess’s hit sent Worthington to the showers.

San Francisco padded its lead over the next two innings on Wagner’s second homer of the game in the seventh and an RBI squeeze bunt by O’Connell in the eighth that scored Schmidt, who had doubled and was sacrificed to third.

The Giants could be forgiven for putting this one under the W column with a 9-4 lead going into the bottom of the eighth. But anyone who thought this game was over was wrong by a long shot. McMillan led off with a single, then up came another footnote player the time travelers came to see, Walt Dropo. Dropo, pinch-hitting for pitcher Hal Jeffcoat, turned heads in 1950 when he was the runaway American League Rookie of the Year for the Boston Red Sox. In 1952, he set a record that still stands when he recorded hits in 12 consecutive plate appearances.5 That was ancient history because by 1958 he was strictly a part-time player, and had only joined the Redlegs on June 24. He made himself very popular with his new teammates, smacking a two-run homer to make the score 9-6.

Cincinnati still needed a prayer, but they didn’t get one from Johnny Temple, who flied to right for the first out of the inning. Dee Fondy was up next and he singled to right. Frank Robinson then fouled out, but Crowe reached first on a base on balls. Tebbetts brought in another footnote player, Eddie Miksis, to run for Crowe. Miksis was involved in one of the most famous games in baseball history, Game Four of the 1947 World Series. The Yankees’ Bill Bevens was one out away from pitching the first no-hitter in Series history when he walked Pete Reiser intentionally with a runner on second and New York ahead 2-1. Miksis ran for Reiser and scored the winning run on Cookie Lavagetto’s double, the only Dodgers hit of the game, to give Brooklyn a 3-2 win.

Miksis’s experience with improbable wins may have led Tebbetts to hope that lightning would strike twice. Of course, we’ll never know if that’s what he was thinking, but nonetheless, that’s what happened. First Lynch singled to center, scoring Fondy and moving Miksis to third. Bailey followed with another single, this time to left, scoring Miksis. Hoak didn’t want to miss out on the singles party, and his hit brought Lynch home with the tying run. McMillan popped to short to end the inning, but the game was now tied, 9-9.

Joe Nuxhall, our last famous obscure hero of the evening, came on to pitch the ninth. When players were in short supply during World War II, Nuxhall pitched two-thirds of an inning for the Reds in 1944 against the eventual World Series-winning Cardinals at the tender age of 15. Cincinnati was already losing 13-0 in the ninth, so the five earned runs the overmatched kid gave up didn’t make much difference.

Nuxhall returned to the Redlegs at the grand old age of 23, and by 1958 was working as both a starter and reliever. As he had in 1944, he came on in the ninth, but this time set the opposition down in order. It was the only three-up-three-down inning of the entire game (Worthington faced three batters in the second, but gave up a single to Lynch, who was then caught stealing as part of a strikeout-throw-out double play).

Dropo struck out to lead off the Redlegs’ ninth. Temple singled to right, then moved to third on Fondy’s hit. By this time even the time travelers, who already knew the outcome, were going nuts along with the locals.

The obvious move in this situation is to walk the next hitter to load the bases, and the decision was that much easier when Robinson was at the plate. After Robinson’s free pass, Tebbetts sent up Pete Whisenant to face Giants right-hander Ruben Gomez. Whisenant, a righty batter, hit .140 against right-handed pitching in 1958, but he was the 20th player Tebbetts used in the game, so there wasn’t much choice. Whisenant went ahead 3-and-0 before Gomez threw two strikes. Since this was a crazy game anyway, it was only fitting that Pete stroked a single up the middle and became the hero.

It was an incredible finish to an unbelievable game, and even though the Redlegs won, it had little impact on their season, as they finished in fourth place with a 76-78 record. The Giants, on the other hand, never recovered. They went 26-28 the rest of the way and fell out of the race. They ended up in third place, 12 games behind the league champion Braves.

And the time travelers returned home safe and sound.

In addition to the sources cited in the Notes, the author also consulted baseball-almanac.com, baseball-reference.com, Cincinnati Enquirer, CNN.com, and Sports Illustrated.

2 The great science-fiction writer published The Time Machine in 1898.

3 Newcombe bounced back impressively over the course of the season, going 7-7 with the Redlegs and finishing with a 4.67 ERA.

4 This was the second, and last, pinch-hit appearance of the season for Haddix. He batted for Lawrence in the 11th inning of a 12-inning 4-3 loss to the Braves on May 19. He struck out then, too.

5 That record has since been tied by Matt Diaz of the Atlanta Braves in 2006 and Andre Ethier of the Dodgers in 2012.