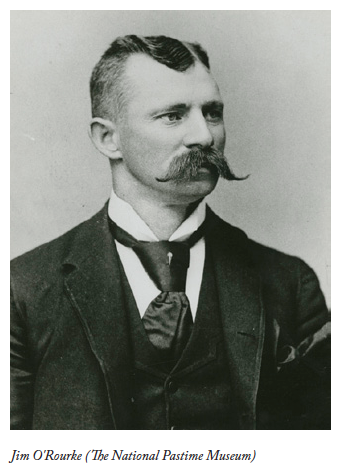 After Michael and Hugh Campbell helped the upstart Irvington Club pull off its historic 1866 upset of the champion Brooklyn Atlantics, they had plenty of time to enjoy the fruits of victory before a rematch. However, in the case of the Resolutes’ equally shocking victory over the Red Stockings in the July 4, 1873, morning game, the time between matches was measured in hours, not days. With the first game ending about 11:30 A.M., the two clubs probably left the hot playing field looking for any shade they could find, which unfortunately gave little respite from the oppressive heat. Although Harry Wright’s primary concern with the impact of conflicting events on attendance was the 2:30 regatta, all accounts agreed that a good crowd made its way to the Red Stockings grounds for the afternoon game with the Boston Evening Journal estimating the attendance at over 1,800.1

The Red Stockings probably couldn’t wait to get back on the field and made only one change in their lineup: George Wright replaced Charles Sweasy, who in the morning had played his only game with Boston. There were, however, some position changes. Jim O’Rourke moved from right field to catcher, exchanging places with James “Deacon” White, who had caught the first game. Interestingly, in spite of the brutal loss and the club’s relatively subpar performance thus far in 1873, Harry Wright didn’t panic with his choice of pitchers. While pitchers of the era typically pitched every game, Wright appeared to have recognized that asking his ace, Albert Spalding, to pitch twice in such heat was too great a long-term risk. Instead Wright elected to make his second pitching start of the year with Spalding taking his manager’s place in center field.2

Elizabeth, on the other hand, which probably didn’t have any substitutes, not only went with the same players, but in the same positions, a decision that probably helped to determine the outcome or at least the final margin. If the Red Stockings had been guilty of taking Elizabeth for granted in the first match, they made no such mistake in the second. When a Resolute runner reached base in the first inning, O’Rourke and Ross Barnes wiped out the threat with “a good double play.”3 Barnes became especially aggressive on foul balls, retiring three Resolutes on bound catches which the crowd “greeted with rounds of applause.”4 All told, Boston made only one error in the match and the defense played a key part, especially in the early innings, in limiting the possibility of another upset, because the Red Stockings offense was still having a hard time with Campbell’s pitching. Boston did manage four runs in its first four at-bats, but the Red Stockings and their fans must have got more than a little nervous when the bottom of the Resolutes order generated three runs in the fifth inning to close the score to 4-3.

By this point, however, both Hugh Campbell and his catcher, Doug Allison, must have been close to exhaustion. Boston broke through for five runs in the sixth and three in the seventh for a commanding 12-3 lead as the Resolutes couldn’t generate any further offense against Harry Wright and the stout Boston defense. Finally, as the Elizabeth Daily Journal reported a few days later, the Resolute battery “gave out” and “Fleet had to pitch then and [A.] Allison catch.”5 According to National Association historian Bill Ryzcek, Frank Fleet had the dubious distinction of being “the most traveled player in the league’s history.”6 Fleet was primarily an infielder, but with limited ability at any position, and pitching was clearly not his forte. This may also have been the point that the Resolutes’ defense fell apart (14 Red Stockings reached base on errors over the course of the game). Having suffered an especially galling defeat in the first game of the holiday twin bill, Boston was in no mood to be merciful and gave full vent to its frustrations in the eighth inning, scoring an incredible 21 times before the side was finally retired. Umpire Thomas Mosely, who had also worked the morning game, called the contest at the end of eight innings, perhaps due to darkness; but at any rate a decision thoroughly seasoned with mercy. Mosely worked all three of the Red Stockings-Resolutes matches in July 1873; That constituted 60 percent of his professional umpiring career of five games.7

Newspapers in both cities recognized the magnitude of the rout. The Elizabeth Daily Journal informed its readers that “the Bostons ran up the score then out of all proportions.”8 After giving due credit to Elizabeth for its opening-game victory, the Boston Daily Advertiser said the visitors “could not have expected to defeat the Bostons a second time on the same day but it is doubtful they anticipated the terrible drubbing of 32-3.” The paper also noted that the Resolutes’ “depleted treasury” had received some badly needed “replenishment.”9 The New Jersey club’s bank account doubtless received further “replenishment” the next day when Boston took the final game by a comfortable but more reasonable 13-2 score. Probably no day of baseball ended with two teams going in more dramatically different directions. Boston was now headed toward the second of four consecutive championships, while Elizabeth was sliding toward oblivion before the season even ended. And yet the Boston Daily Globe’s description of the July 4 holiday experience of visitors to Boston might very well have applied to both clubs — they “returned home at night, tired and cross, but satisfied [at least partially] with the day’s enjoyment.”10