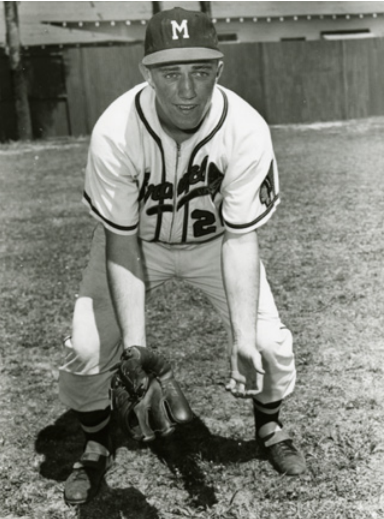 The Pittsburgh Pirates traveled to Milwaukee in 1960 for their July 4 doubleheader with the Braves with both good and bad news on their minds. With 43 wins and 27 losses, they were in first place in the National League by 3½ games over the 39-30 Braves.

It was the first time the Pirates had been in first place on the Fourth since 1932, but they had lost five of their last seven games and were just a tick over .500 since June 1 after a very fast start.

And now they were facing the Braves, who had won the World Series in 1957, returned as National League champions in 1958 only to lose to the New York Yankees, and had lost a best-of-three playoff for the NL pennant to the Los Angeles Dodgers in 1959. The Braves boasted a powerful offensive lineup featuring four players who had just been named to the 1960 All-Star team: outfielder Henry Aaron, first baseman Joe Adcock, third baseman Eddie Mathews, and catcher Del Crandall.

Pirates manager Danny Murtaugh had won the Associated Press Manager of the Year award by a landslide in 1958 by finishing in second, eight games behind the Braves, in his first full season as Pittsburgh’s skipper. It was the closest the Pirates had come to a pennant in 20 years.

A highly partisan crowd of 34,478 was in Milwaukee County Stadium to cheer the Braves. Stadium ushers were on a one-day strike, so the fans had the pleasure of being led to their seats by Braves front-office personnel including general manager John McHale, executive vice president Birdie Tebbetts, and assistant farm director Roland Hemond.

The Braves confirmed the Pirates’ worries when they overcame a 6-1 lead to win the first game of the holiday doubleheader in extra innings. The game had appeared well under control with Pittsburgh’s reliable veteran Bob Friend on the mound with a five-run lead in the seventh inning. Friend retired the first 13 Braves batters without allowing a batted ball to leave the infield.

The Bucs had jumped ahead in the third when Dick Stuart’s double drove in Bill Virdon, who had reached base on a single.

Virdon singled again in the fifth inning, and scored on Dick Groat’s double. Groat then scored on Bob Skinner’s home run, giving the Pirates a 4-0 lead. The Braves finally got on the board with an unearned run in the sixth when Crandall doubled and scored on shortstop Groat’s error.

Both teams scored in the seventh. The Pirates increased their lead to 6-1 in the top of the inning on a two-run homer by Stuart, which brought home Skinner after a walk. In the bottom of the inning, Aaron tripled and the Braves followed with two singles and a sacrifice fly, scoring two more runs and closing to 6-3.

Aaron struck again in the eighth with a two-run home run, his 22nd  homer of the season. The Pirates replaced Friend with Fred Green for one batter and then brought in their fireman, Roy Face. Crandall’s home run off Face in the bottom of the ninth tied the score, 6-6.

Aaron excited the home crowd with his defense in the top of the 10th, going to the outfield fence to snag long drives by Stuart and Roberto Clemente. In the Braves’ half of the inning, Face walked Mathews, who then stole second base and scored the winning run on rookie Al Spangler’s two-out walk-off single to short left-center field, giving the Braves a dramatic victory.

The crowd went wild. The Braves danced off the field, and the Pirates went into a state of mild shock. If there was a time in the 1960 season for the Pirates to panic, a Pittsburgh writer noted later, this was the time.1

There was some remarkable pitching that day. Braves starting pitcher Lew Burdette threw six innings for a no-decision in the first game of the doubleheader, and also threw three innings of relief in the second game, which the Pirates took 7-2 behind a complete game by Harvey Haddix.

Warren Spahn, 39 years old, who just two days before had pitched eight innings for the Braves against Bob Gibson and the St. Louis Cardinals in a 7-1 loss, threw three innings of relief for the win in the opener. Face blew his fourth save of the year as his record fell to 5-4, a sharp change from  1959, when he had an 18-1 record coming out of the bullpen.

Just a few days shy of his 27th birthday, Spangler was the hero of the day, making good use of his one at-bat after replacing left fielder Wes Covington as a pinch-runner.

The Braves signed Spangler in 1954 off the Duke University campus, and he spent all of the 1956 and 1957 seasons in military service. In 1960 he appeared in 101 games for the Braves, mostly as a pinch-runner or defensive replacement. He had 105 at-bats, hitting .267 and stealing six bases.

Years later Spangler recalled, “(Covington) didn’t like to play defense, but he was a great hitter. When we played together in 1960, he played left field and I would go in the later innings and replace him for defensive purposes.”2

Spangler, whose nickname as a player was Spanky, enjoyed his most memorable day as a Brave that afternoon, although he left the team after the game to attend his grandfather’s funeral in Philadelphia. A year later he became an original member of the Houston Colt .45s when Milwaukee left him unprotected in the 1961 expansion draft, and later played for the 1969 Chicago Cubs.

Postgame comments sharpened the rivalry between the two teams. Aaron, 26 years old and entering his sixth year with the Braves, was quoted by the next day as saying the Pirates “are on the ropes” and “looked scared to me when they blew a five-run lead in the first game Monday.”3

Pittsburgh writers overheard the comments made to the Milwaukee Sentinel’s Lou Chapman. Chapman described Aaron as “vehement” and quoted him as saying, “We’ll catch ’em all right. Not only will we catch ’em, but we’ll go by ’em like a damn jet!” 4

When he heard Aaron’s comments Braves manager Charlie Dressen laughed and said, “A jet’s pretty fast. But I think we’re gonna catch up with ’em and shoot up in front.”5

The Braves eventually pulled into a tie for the NL lead with Pittsburgh on July 24 after winning 10 of 12 games.  But the next day the Pirates won while the Braves were idle and retook the lead. Milwaukee proceeded to lose 11 of the next 16.

The Pirates went on to win 95 games to finish seven games ahead of the second-place Braves. On July 4, Spanky Spangler and the Braves managed to bring home the sort of exciting win Milwaukee fans were accustomed to celebrating.