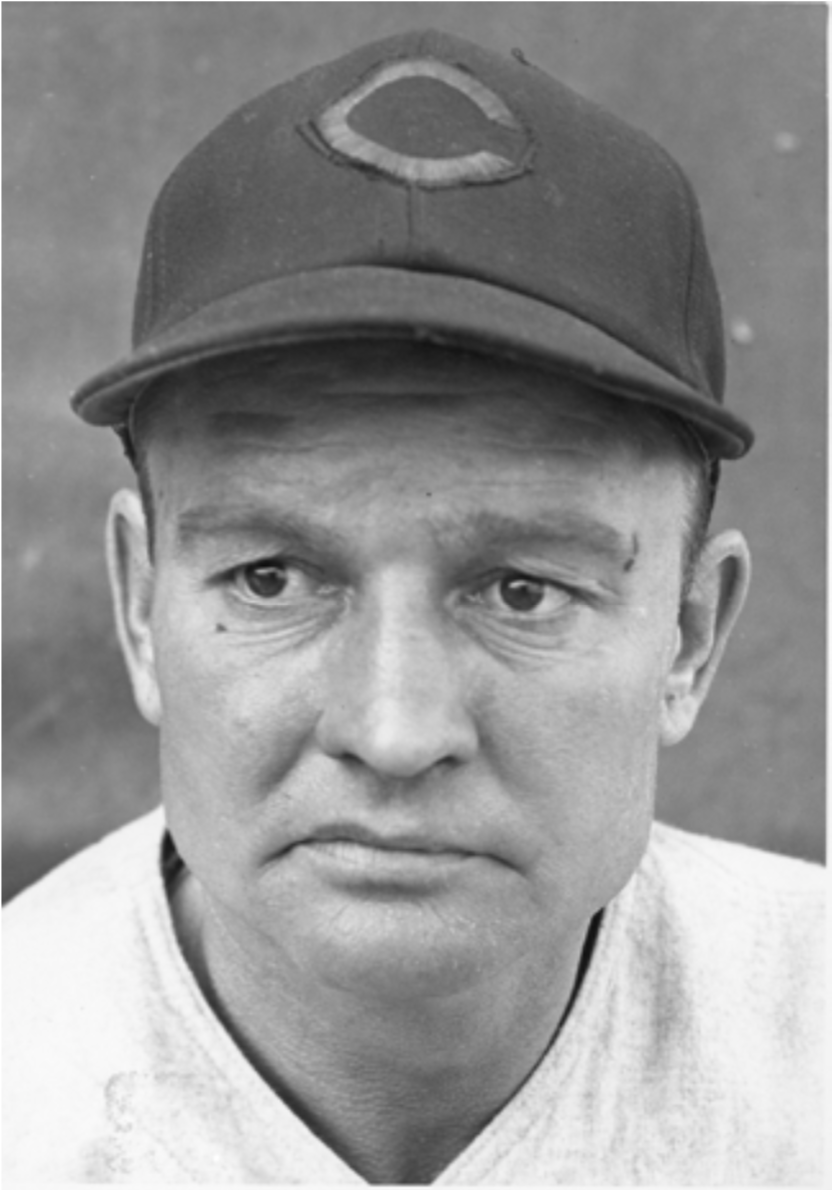 Remember the name: Walker Cooper. Granted, the All-Star catcher is typically not placed in the same conversation with the likes of Roush, Lombardi, Robinson, Perez, Votto, and other great Reds sluggers. But for one shining moment on a blistering July afternoon — the hottest July 6 ever recorded in Cincinnati history1 — the Atherton, Missouri, native outshone them all as his record-setting 10-RBI performance led the Reds to a 23-4 decimation of the Chicago Cubs before 4,036 sweltering fans.

Cooper’s exceptional feat was undoubtedly the highlight of the Reds’ 1949 season. The club was firmly ensconced in seventh place in the National League by midseason and would not budge any further. Coming into the two-game series with the Cubs, the Reds had just dropped a doubleheader to the Pittsburgh Pirates and had generated only two runs in their last three games.

The Cubs were in even worse condition, landing in the National League cellar early in the campaign and remaining there for good. Heading into Crosley Field for this midweek series, the Cubs sported a 28-45 record, having just lost two of three to the St. Louis Cardinals at Wrigley Field.

Despite the fact that the teams had already split 10 games in their season series and were going nowhere, two deals consummated before the June 15 trading deadline proved to be key factors in this contest. On June 13 Cooper was traded by the New York Giants to the Reds for catcher Ray Mueller. According to news reports, Cooper criticized Giants skipper Leo Durocher for the manner in which he treated his players, particularly his “outspoken” catcher.2

Two days later the Reds traded outfielder Frank Baumholtz and outfielder-first baseman Hank Sauer to the Cubs for outfielders Harry Walker and Peanuts Lowrey. Chicago Sun-Times sports columnist Gene Kessler called the Sauer trade “one of [the] best deals ever made by [the] Cubs.”3 Early indications supported Kessler’s claim. Before the trade Sauer was hitting only .237 with 4 homers in 42 games for the Reds. Coming into this series, Sauer was batting .384 for the Cubs with 9 homers and 25 RBIs in just 21 games. Sauer had hit safely in his last eight games and was pounding the ball at a .500 clip.4

The Cooper trade was considered just as valuable for the Reds as the Sauer deal was for the Cubs. Big Coop was still in the prime of his career, ranking among the top five National League catchers in batting average, slugging average, home runs, and RBIs. Cooper was already a six-time All-Star and would make his seventh appearance in the All-Star Game in six days. Since arriving in the Queen City, Cooper had three round-trippers, all hit at Crosley Field. It was his temperament, however, that had Cooper playing for six clubs during his 18-year career. Said Cardinal teammate Stan Musial: “When Big Coop was on your club, you didn’t have to worry about squabbles with anybody else, because he was in all of them. He was the brawling type of fellow who comes to play, didn’t ask for any quarter and certainly didn’t give any.”5

By game time, the talk in the stands was all about the heat. The thermometer registered 99 in the press box and 110 on the pitcher’s mound.6 Reds ace Ken Raffensberger was going after his ninth win of the season — and his third victory over the Cubs — against Cubs hurler Monk Dubiel. Raffensberger retired the visitors without any damage in the first. Dubiel was not so lucky in the home half of the first; his day ended quickly when a line drive hit by former teammate Peanuts Lowrey slammed off his right elbow. Warren Hacker was brought in to relieve Dubiel and proceeded to give up singles to Cooper, third baseman Grady Hatton, and first baseman Ted Kluszewski, resulting in the first two Reds’ tallies.

The scoring barrage began in earnest in the Reds’ second when four runs crossed the plate on singles by Cooper, Hatton, and Kluszewski. In the midst of this parade, Cubs reliever Dewey Adkins came in for Hacker and managed to staunch the bleeding.

Not to be deterred, the Cubs fought back in the top of the third. After Adkins struck out to open the frame, third baseman Frankie Gustine tripled and scored on a sacrifice fly by first baseman Phil Cavaretta, ending a 22-scoreless-inning streak by Raffensberger against the Cubs.7 After center fielder Andy Pafko kept the rally going with a single, Sauer sent the pill over the 382-foot marker in left field for his 14th home run of the season. The Cubs’ output in the third halved the Reds’ lead, but Raffensberger would relinquish only one more Cubs run, in the fifth.

Much to the delight of the roasting faithful, the Reds responded to the Cubs’ scoring by putting up another six runs in the third. The crowning moment of this barrage was Cooper’s first homer of the day, a towering three-run shot to left field scoring second baseman Bobby Adams and Lowrey. Cubs reliever Doyle Lade replaced Adkins after Cooper’s four-bagger and conceded only one additional run. A third of the game had been completed and the score already resembled a defensive-oriented football game, 12-3.

The middle innings flew by without incident until the bottom of the sixth, when nine Reds came to the plate and added another six runs. Cooper belted his second three-run dinger over the left-field fence, again scoring Adams and Lowrey. Cooper was not alone in hitting the long ball that inning. Kluszewski smashed a towering two-run shot over the center-field fence, scoring Hatton. Once the dust had settled, the Reds had boosted their lead to 18-4. Mercy rule, anyone?

After Raffensberger retired the side in the visitors’ half of the seventh, the Reds continued to pile it on. Bob Muncrief was the next Cubs lamb heading to the slaughter. Harry Walker greeted the fifth Cubs pitcher of the afternoon with a single. Adams flied out to Pafko in center field for the first out, but rookie center fielder Lloyd Merriman, who had entered the game in the top of the seventh for Lowrey, stroked a single. Cooper advanced to the plate for the sixth time and ripped his third three-run homer of the day, a long blast over the center-field fence, driving in Walker and Merriman. Cooper’s hat trick hiked the Reds’ lead to 21-4.

The Reds steamroller continued in the home half of the eighth. Right fielder Johnny Wyrostek opened the inning with a single off the Cubs’ sixth reliever, Emil Kush. Shortstop Claude Corbitt grounded out, advancing Wyrostek to second, and Raffensberger popped out to Cubs catcher Rube Walker in foul territory for the second out. Harry Walker drew a walk and, with Adams at the plate, Kush threw a wild pitch, advancing Wyrostek and Walker. Adams drove them home with a single and Merriman followed with another base hit. Cooper headed to the plate for his final at-bat with single-game records hanging in the balance. Alas, the consecutive hitting streak was snapped as Cooper’s hot grounder in the hole was scooped up by Cubs shortstop Bob Ramazotti, who threw to second for the force on Merriman.

The Cubs went quietly in the ninth, undoubtedly wondering what had transpired in the last 2 hours 45 minutes. The scoreboard told the tale: Reds 23, Cubs 4.

For the Reds, it was an unbelievable afternoon despite the stifling heat:

For Walker Cooper, there would not be another game like this one:

Cooper played only 97 games for the Reds before moving on to the Boston Braves in 1950. Yet in just one of those games, he made an impact that still resounds.

9 Washington Nationals third baseman Anthony Rendon is the latest to drive in 10 runs in a game. On April 30, 2017, Rendon went 6-for-6, including three home runs, and drove in 10 runs in the Nationals’ 23-5 shellacking of the New York Mets.