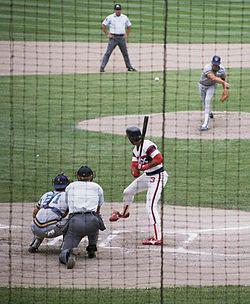 The Chicago White Sox exploded, according to sportswriter Robert Markus of the Chicago Tribune, “like so many 4th of July skyrockets” on Wednesday, July 7th, knocking off the Detroit Tigers, 7-0.1 This game signaled the emergence of a new offensive threat, 23-year-old Harold Baines. The third-year player walloped three consecutive home runs, one of which was a grand slam. Brian Bragg of the Detroit Free Press acknowledged the achievement by writing, “Baines single-handedly destroyed the Tigers Wednesday with the most fantastic night of his career.”2

The White Sox and Tigers owned identical 41-36 records, but were both reeling as they arrived at Comiskey Park to play the first of a two-game set.3 Skipper Tony La Russa’s Pale Hose had lost eight of 11 contests to fall four games behind the Kansas City Royals and were tied with the Seattle Mariners for third place in the Central Division. The Tigers were “positively floundering,” according to Bragg.4 Occupying first place in the East about four weeks earlier, manager Sparky Anderson’s squad had won just five of its last 23 games to fall 3½ games behind the Milwaukee Brewers in the East.

“The Baseball Palace of the World,” as some people called Comiskey, gradually filled with 24,018 spectators on a clear night. Temperatures had settled in the low 80s at the 6:30 start time as White Sox right-hander Dennis Lamp took the mound. Sporting a 40-50 record in parts of six seasons (including 5-3 thus far in ’82), Lamp looked sharp from the outset, breezing through the first five innings and yielding only three hits. The Tigers’ right-hander Jerry Ujdur was even more impressive. Called up to the big club just a month earlier from the Triple-A Evansville Triplets of the American Association, Ujdur held the White Sox hitless through four frames, belying his dismal 1-4 won-loss record.

Baines broke up the no-hitter in the bottom of the fifth with a line-drive home run, his seventh of the season, which “barely cleared the right-field wall,” according to Bragg, and landed in the front row of the bleacher seats.5 “I was looking for a curve,” said Baines, “and he threw me a fastball.”6 After Lamp set down Detroit in order in the top of the sixth, Tony Bernazard led off the seventh with a double. Ujdur escaped a jam when he intentionally walked clean-up hitter Greg Luzinski with one out and gave up a screeching liner to. Tom Paciorek that third baseman Tom Brookens snared and doubled Bernazard off second.

It was deja vu all over again when Baines led off the Chicago half of the seventh against Ujdur, who was working on a two-hitter. This time, however, the left-handed line-drive hitter, who had slugged just 23 home runs in his first two seasons in the big leagues, smashed one deep to right-center. The ball traveled an estimated 420 feet and landed in the bullpen to put the White Sox up 2-0. According to the Tribune, the modest Baines reluctantly acknowledged the partisan crowd’s standing ovation by waving his glove.7

The game was tight until the fateful eighth inning when the White Sox blew it open. Ujdur was replaced by southpaw reliever Dave Rucker, making his first appearance of the season, and just the third of his career, since his promotion from Evansville. With one out, Rucker caught the speedy Bernazard napping at first, but his throw sailed over first baseman Richie Hebner’s head for a two-base error. The next batter, Steve Kemp, singled to drive in Bernazard, opening the flood gates and sending Rucker to the showers. After Kemp greeted veteran rubber-armed reliever Elias Sosa by stealing second, the slow-footed Luzinski was treated to an intentional walk in hopes of a twin killing. The plan backfired when Sosa hit Pacoriek to load the bases.

With the White Sox up 3-0, “the best was yet to come,” Markus wrote.8 Baines stepped to the plate as many in the stadium no doubt held their breath. With the count 3-2, Baines hit a flyball that according to the Tribune, Tigers center fielder Chet Lemon almost caught in a miraculous attempt.9 The ball landed just over the wall for a grand slam, extending the White Sox lead to 7-0. “All I was looking for was something to hit hard, any place,” said Baines after the game. “I would have been happy to hit even a sacrifice fly for another run. This time I’m looking for the fastball, not the curve, because it’s 3 and 2.”10 Baines remained cool and collected as he circled the bases and crossed home plate without cracking a smile. His teammates even had to push him back onto the field to again acknowledge the cheering crowd. “I’ve never hit three home runs in a game” he explained after the game. “It felt good inside, but I didn’t jump up for joy.”11

With the game out of reach, the only question was whether Lamp would record his first shutout since blanking the Los Angeles Dodgers on May 23, 1980 at Wrigley Field during his days with the Chicago Cubs. Hebner led off the ninth with a single, but was erased on a 6-4-3 double play. Lamp added his exclamation point to the victory by punching out Lance Parrish to end the game in two hours and 16 minutes.

“The way Lamp was pitching,” gushed the Tigers Sparky Anderson, “we weren’t going to score a run. He pitched outstanding tonight.”12 In fashioning his sixth career shutout, the California native yielded only five hits, did not issue a walk, and fanned seven. Normally a fastball pitcher, Lamp credited pitching coach Ron Schueler for his success and his change in approach. “Ron told me to throw a lot of breaking balls. He finally convinced me,” revealed Lamp. “I showed them the breaking ball early. When you establish that, they can’t sit on the fast ball. I’ve never had a breaking ball this good for nine innings.”13

Despite Lamp’s strong performance, the White Sox’ true hero was Baines, whose “magnificent night,” noted the Chicago Tribune, overshadowed all other stories. In a closely fought contest until the bottom of the eighth, Baines proved to be the difference maker. Ujdur, a tough-luck loser, yielded only three hits in seven strong innings, but two of those were solo shots hit by Baines. The outfielder’s third round-tripper, the first of 13 eventual grand slams in his career, gave him six RBIs, a new career-high. “I’m an aggressive hitter,” Baines said, “but I still have to learn to stay aggressive at times. This time, I’m concentrating just to get a hit.”14

Baines’ feat marked the third and last time in the history of pitcher-friendly Comiskey Park, that a White Sox player would hit three home runs there in one game. Gus Zernial did it first, on Oct 1, 1950, in a loss to the St. Louis Browns. Claudell Washington did it against the Tigers, on July 14, 1979.

Baines enjoyed a breakout season in 1982, ending up with 25 home runs and 105 RBIs. He belted three home runs in a game two other times in his career but never developed the reputation as a slugger.15 Over the course of 22 campaigns, he hit at least 20 homers 11 times, reaching a career high of 29 in 1984, and finishing with 384.

In addition to the notes above, the author consulted baseball-reference.com, retrosheet.org, and SABR.org.

7 Markus, “Sox and LaRussa Both Explode.”

11 Markus, “Sox and LaRussa Both Explode,”