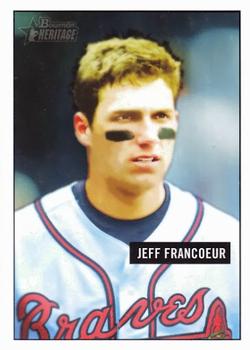 The Atlanta Braves were grinding down the upstart Washington Nationals’ NL East lead 84 games into the 2005 season, eager to regain their accustomed first-place perch. Atlanta had won the division every year a pennant had been awarded since their stunning “worst to first” 1991 season.1 They had just ridden Horacio Ramirez’s complete-game three-hitter and a home run by 46-year-old Julio Franco to a 6-0 win over the Chicago Cubs in the first game of a July 7 twi-nighter at Turner Field. But Franco was an aberration—the Braves were a young team and had added yet another of their impressive “Baby Braves” for fans to savor in the second game.2

With right fielder Brian Jordan injured and fourth outfielder Ryan Langerhans not an everyday answer, the Braves had promoted Atlanta native and schoolboy phenom Jeff Francoeur from Double-A Mississippi the day before. The 21-year-old joined another highly-touted Braves’ rookie, Brian McCann, also 21; he’d gotten his call-up on June 10 to buttress the club’s catching.

Francoeur and McCann knew each other well. Both were born and grew up in the Atlanta metro area and competed against each other for their respective high schools—Francoeur at Lilburn Parkview, McCann at Duluth. Scouting the local standouts closely, the Braves had selected Francoeur in the first round of the June 2002 draft (No. 23 overall) and McCann in the second round (No. 64). Except for the post-draft 2002 season, when they were assigned to different rookie-level clubs, they had climbed the Braves’ minor league ladder together.3 After Francoeur came aboard, he and McCann shared a bachelor apartment for the rest of the 2005 season.4

A crowd of 34,847 hoped for a sweep as they settled in for the evening game. Steady John Smoltz, back in the rotation after yeoman work as the Braves’ closer from 2001 through 2004,5 got the call from manager Bobby Cox. Right-hander Jerome Williams started for the Cubs. The game was still scoreless when the righty-swinging Francoeur, hitting seventh in the order, just behind McCann, stepped in for his first major league at-bat to lead off the Braves’ third. The Atlanta faithful gave him a resounding ovation. “I really didn’t know what do, but Michael Barrett was catching, and he said, ‘Step back, kid, and take it in. It only happens once.’”6 Not much else happened then. Francoeur grounded to third on a 1-1 count.

The Cubs nicked Smoltz for two runs in the top of the fourth, but the Braves got one back in their half. Then in the fifth Atlanta went ahead 3-2 on shortstop Rafael Furcal’s sixth home run of the year, which scored Pete Orr in front of him. Aramis Ramirez answered for Chicago in the sixth with his own two-run shot as the score seesawed to 4-3 Cubs.

Chicago held that lead into the Atlanta eighth. Williams was now gone after 102 pitches and so was Will Ohman, who had pitched the seventh. The Braves roughed up the new Cubs’ pitcher, Roberto Novoa, right away with a Marcus Giles triple, Andruw Jones’s home run and Adam LaRoche’s single. Cubs manager Dusty Baker brought in Glendon Rusch, and after Chicago couldn’t get an out on a sacrifice bunt by McCann, Francoeur came up with two men on and the Braves ahead 5-4. He was still hitless in the majors–Williams had struck him out in the fourth and again in the sixth.

Facing a new pitcher and a lefty to boot, Francoeur made something happen this time. He worked to a 3-2 count, and then hammered a home run to center field that lifted Atlanta to a bankable 8-4 lead enroute to the 9-4 final.7 The hometown standout and “prize rookie”8 had delivered impressively in his debut game.

By August 29, with his heroics continuing9 and the Braves back in first place, a grinning Francoeur graced the cover of Sports Illustrated, which hailed him as “The Natural.”10

1 The 1994 strike ended that season on August 11, without pennants or a World Series. Atlanta stood second to Montreal in the NL East when the curtain came down.

2 The 2005 Braves had had nine rookies appear on their roster before Francoeur’s call-up on July 6. He was the tenth. Farber, “Georgia’s New Peach.”

3 Francoeur started at Danville in the Appalachian League in 2002, while McCann was assigned to the Gulf Coast Braves. They were together at Rome (Low-A South Atlantic League) in 2003, and both started the 2004 season at Myrtle Beach (High-A Carolina League). McCann stayed there all season; Francoeur was promoted to Class AA Greenville (SC) for 18 games. The Braves moved their AA franchise to Pearl, Mississippi for 2005. Francoeur and McCann started that season there together. Baseball-Reference.com.

7 The Braves tacked on another run later in the inning. John Foster, who had pitched a perfect top of the eighth, was the recipient of the six-run outburst and got the win. Novoa, hung with the classic box score yoke of futility, “faced 3 batters in the eighth,” was the losing pitcher. Retrosheet.org.