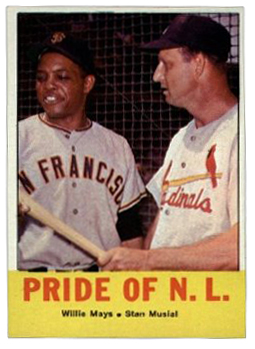 After three seasons in which a pair of games were played, the All-Star Game returned to a single contest in 1963. The early favorite to host was Minneapolis, but new Cleveland GM Gabe Paul lobbied successfully to have the game on the Ohio lakeshore. The midsummer event had drawn crowds in Cleveland in excess of 68,000 in both 1935 and 1954. The baseball powers who hoped for a similar turnout were disappointed with the crowd that numbered 44,160. The fans were treated to a fine performance by Willie Mays who padded his All-Star stats with two hits, two stolen bases, two runs batted in and a run scored. He also robbed Joe Pepitone of extra bases with a catch at the fence.

Players, coaches, and managers voted for the starting lineups and the results were announced on June 29. Despite a broken foot, Mickey Mantle was selected as the center fielder in the American League. Bill Mazeroski was selected as the National League second baseman but suffered an injury to his right leg after the lineups were announced and chose to sit out the game to get treatment. The remainder of the 25-man rosters was filled by the managers, Al Dark from the National League and the American League’s Ralph Houk.

Dark replaced Mazeroski in the starting lineup with Julian Javier giving him an all-St. Louis infield which included Ken Boyer at third, Dick Groat at short, and Bill White at first. The outfield featured Mays, Hank Aaron, and reigning batting champion Tommy Davis. Ed Bailey of the Giants was the catcher. Jim O’Toole of Cincinnati got the nod as starting pitcher over future Hall-of-Famers Sandy Koufax, Juan Marichal, and Warren Spahn, none of whom would see action because they had made their regular start on Sunday.

Houk countered with little Albie Pearson of the Angels in center in place of Mantle. He was flanked by Al Kaline of the Detroit Tigers in right and the Angels’ Leon Wagner in left. The infield consisted of the Yankees’ Joe Pepitone at first, Nellie Fox of the White Sox at second, Minnesota’s Zoilo Versalles at short, and Boston’s Frank Malzone at third. The catcher was the Twins’ Earl Battey, who would catch the Angels’ Ken McBride, a Cleveland native who had pitched a high school championship game in Municipal Stadium. McBride’s six-game winning streak had earned him the nod over ERA leader Juan Pizarro and notables like Jim Bunning and Jim Bouton. Baltimore Orioles starter Steve Barber sported 12 wins, but a leg injury scratched him from the game.

The selections for the rest of the 25-man rosters raised a few eyebrows. Houk left Whitey Ford at home and chose Norm Siebern over Dick Stuart as the backup at first base despite Stuart’s second-place finish in the voting. Stuart was very vocal about his feelings at the slight. He referred to Houk as a “third-string catcher” whenever he had the chance. On the National League side, Dark ignored second-place vote-getters Vada Pinson and Frank Robinson in favor of his own Willie McCovey and lone New York Met representative Duke Snider. Dark added pitcher Larry Jackson as a late replacement for Mazeroski.

In the first inning, McBride used his curve and sinker to retire the side in order. In the bottom half, Fox and Pearson singled to put runners at the corners and it appeared the Americans were off and running. Kaline sent a flyball to Davis in left who uncorked a perfect strike to the plate that caught Fox with room to spare ending the threat.

McBride walked Mays leading off the second and Willie promptly stole second. Bailey walked and after a pop fly, Dick Groat singled to left, driving in Mays with the first run of the game.

The bottom of the second inning had been delayed briefly because Dark had sent Johnny Edwards in to replace Bailey behind the plate. Plate umpire Hank Soar refused to announce the switch because starters had to go three innings. Bailey had headed toward the showers and had to be recalled. Once play got under way, the AL tied it up when Wagner singled, Versalles was hit by a pitch and McBride singled off the glove of a diving Ken Boyer, scoring Wagner.

The Nationals struck for two runs in the third. Davis singled and was forced by Aaron. Aaron advanced on a grounder and scored on Mays’ single. Mays stole second again and rode home on Bailey’s single.

The junior circuit responded in their half of the third with a double from the diminutive Pearson, the only extra base hit of the game, and singles by Malzone and Battey to tie the game.

The game would stay tied until the top of the fifth when Detroit’s Jim Bunning walked Davis and with one out White grounded to Malzone at third, who rifled a throw to Bobby Richardson at second, who had just entered the game. The ball glanced off Richardson’s glove, putting runners on the corners. Mays stepped to the plate and hit a cue ball to Joe Pepitone at first. The Yankee youngster looked towards the plate and then towards second. Either play could have been made, but instead Pepitone took the ball to first to get Mays, which allowed Davis to score the tie-breaking run. The locals let out a chorus of boos; Clevelanders were no fans of the Yankees and the two gaffes in the inning by Richardson and Pepitone allowed them to vent their derision.

The inning ended with Stan Musial making his final All Star Game appearance; he pinch-hit for catcher Ed Bailey and lined out to Kaline in right field.

The senior circuit scored one more time in the eighth when White singled off Dick Radatz, stole second, and scored on a Ron Santo single. Two possible rallies by the Americans in the sixth and ninth were halted when Richardson hit into double plays.

The Cubs’ Larry Jackson picked up the win for the National League despite allowing two runs over his two innings of work. The Dodgers’ Don Drysdale picked up the save. Bunning was the hard-luck loser of the contest, allowing just the one unearned run.

Al Dark became the first National Leaguer to play on the winning side and also coach and manage for a victorious team.

I was in attendance at the game. My father had gotten tickets well up in the reserve seats about even with first base. We were far enough away from the posts to have an excellent view of the field, especially of Willie Mays running wild on the bases. As an 11-year-old, I remember being upset that Mudcat Grant, the lone Cleveland rep, did not see any action.