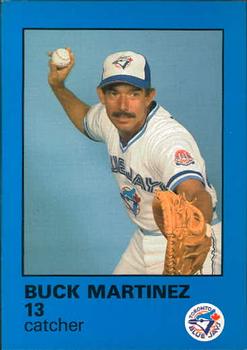 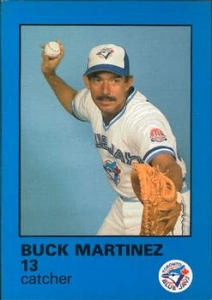 It takes a certain kind of person to play catcher. They have to be the sage in-game counsel to the pitcher, helping him navigate the opposing lineup. They have to have the endurance to squat and crouch for three-plus hours, game in and game out, for 120 to 140 games per season. You also need to factor in the bumps, bruises and nicks from foul tips, errant pitches or the rare follow-through of a bat. Concussions from foul tips or bat follow-throughs are also possible. Then you have the home-plate collision with an oncoming baserunner. In olden days it was akin to the physical violence normally seen in football.

John Albert “Buck” Martinez was one of those hearty souls who strapped on the guards and mask and endured the bumps and bruises, in his case catching over 1,000 games in a 17-year major-league career. In 2017 he detailed his history of concussions, and his fortitude, as follows:

“I was knocked out two or three times in collisions at home plate. … In fact, the first game I ever started — against the Minnesota Twins — I had a collision at home plate with Bob Allison, and I tagged him out. I threw the ball to third base, and then I collapsed and I was unconscious. The trainers came out and gave me smelling salts. I stayed in the game, and actually hit my first major-league home run in my next at-bat.”

“Another one, in Kansas City, I was hit in the head by Joe Lahoud. It knocked me out as well. The next thing I know, I was sitting in the trainer’s room and I still had the baseball in my hand, to prove that he was out.”1

Perhaps his most famous moment on the field, and most infamous injury, occurred in 1985 as a veteran member of the youthful Toronto Blue Jays. The Blue Jays had been laughingstocks for the first five years of their existence, with a composite record of 270-482, before winning 78 games in 1982 and then going 89-73 each of the next two seasons. Buoyed by three 25-year-olds in the outfield (George Bell, Lloyd Moseby, and Jesse Barfield) and a 23-year-old shortstop (Tony Fernandez), the Jays awoke on the morning of July 9, 1985, with a 50-32 record and a 3½-game lead over the Detroit Tigers in the AL East. That evening, they would take on the Seattle Mariners at the Kingdome.

Martinez, who at this juncture was 36 years old, was in his usual role as a backup catcher, as he had been for his entire career with three different teams (with the Royals he was usurped by Darrell Porter and in Milwaukee the Brewers brought in Ted Simmons). Martinez had arrived in Toronto in 1981, and during the next five seasons was the platoon partner for the lefty-hitting Ernie Whitt.

With Seattle starting a lefty (Matt Young) on that mound that night, Martinez got the start. He was catching Tom Filer, who was making his first appearance in the majors in three years.

The game was scoreless going into the bottom of the third, as Filer worked in and out of trouble in each of the first two innings, surrendering two walks and three singles across those frames. Mariners left fielder Phil Bradley led off the bottom of the third with a single, and first baseman Alvin Davis flied out to center field. With designated hitter Gorman Thomas batting, Filer balked, advancing Bradley to second.

Thomas then singled to right field, which was patrolled by Barfield, possessor of one of the finest outfield arms in history. Barfield had thrown Jim Presley out at the plate just an inning before, and over his career he led American League right fielders in assists six times and led all AL outfielders five times.

Barfield charged the ball and from short right field uncorked a laser toward the plate.2 The throw was slightly up the third-base line; Martinez secured it just as Bradley was making impact with him in the right-hand batter’s box.

In his third major-league season in 1985, the 26-year-old Bradley was less than five years removed from a record-setting tenure as a two-sport star at the University of Missouri — including three seasons as the Tigers’ starting quarterback.3 At 6 feet and 185 pounds, he was considered too “small” to play quarterback in the pros, so he decided to pursue pro baseball. He might have been undersized for a quarterback, but his gridiron experience made him no stranger to physical contact. He applied that knowledge to the play at the plate.

Martinez was knocked flat on his back, catching a cleat in the dirt, but held onto the ball to register the second out of the inning. Filer, backing up the plate, went to check on his catcher. X-rays later showed Martinez suffered a broken fibula and dislocated ankle on the collision, but at this point the ball was still in play.

Martinez sat up and had the wherewithal to notice that Thomas had not stopped running while Bradley was trying to score. The burly DH was heading toward third base, so from a seated position Martinez threw to Jays third baseman Garth Iorg.

Unfortunately for Martinez, the throw was offline and skipped past Iorg. But left fielder Bell alertly tracked down the errant peg. By this time Thomas had lumbered around third and headed for home. Bell threw the ball toward the plate, and Martinez, still seated, caught it.

Thomas was still a good 20 feet from the plate and could see Martinez still sitting on the Kingdome dirt in the batter’s box. Thomas, most likely unaware of how immobile Martinez was, made only the meekest of attempts to avoid the tag of the seated backstop. Thomas came in standing up and tried to tiptoe around Martinez, who tagged him for the very uncommon 9-2-7-2 double play and the end to the inning.

The trainers and some of his Toronto teammates went out to check on Martinez, and eventually removed him from the field on a stretcher. Did Martinez know how badly he was hurt?

“I knew that I had a sensation that my leg was asleep. … There was no pain involved, but I couldn’t move my leg. I couldn’t rely on it at all to prop me up or move about any more. It was dead.”4

Whitt took Martinez’s spot behind the plate and caught the rest of the game. The Blue Jays eventually built a 4-1 lead, scoring three runs off Young on five singles in the top of the fifth. Seattle rallied against the Blue Jays’ normally dependable veteran-fortified bullpen, scoring the tying runs in the seventh against Dennis Lamp and Bill Caudill.

The action moved to extra innings; through 12 frames, each team had four runs on 15 hits — all of which were singles. The Blue Jays finally broke through in the 13th inning against Ed Vande Berg, Seattle’s fifth pitcher of the game. Fernandez’s walk and two more singles by Moseby and Jeff Burroughs loaded the bases for Bell, who snapped the tie with the first extra-base hit of the night — a grand slam. Barfield’s double and Willie Upshaw’s triple added another run, and Ron Musselman, the fifth Blue Jay on the mound, closed out Seattle in the 13th, his third inning of relief.

After the game, Barfield discussed the heady play of his fallen catcher:

“I’ve never seen anything like that play. … I saw George’s throw and I started jumping up and down when I realized we had a double play but then I realized Buck was hurt bad.”5

Martinez was sidelined for the rest of the 1985 season, and his absence may have cost the Blue Jays a chance at the World Series. After the injury, Whitt was saddled with an inordinate amount of time behind the plate, regardless of whether there was an opposing lefty or righty on the mound. Whitt played every day in September and October as the Blue Jays drove to the first division title in franchise history — since they didn’t clinch until the last day of the season — even after he injured his shoulder in early September.7

Whitt then started all seven games of the ALCS against the Kansas City Royals. With Kansas City either starting a lefty or getting at least a three-inning relief outing from a lefty in six of the seven games, Whitt slashed .190/.261/.238 and the Royals overcame a three-games-to-one deficit to advance to the World Series, where they beat the St. Louis Cardinals in another seven-game Series.

Martinez — who had spent the stretch drive rehabilitating his injury, aiming to play in the World Series if the Blue Jays made it8 — finally made it back behind the plate the following year. He hit .181 in 81 games for the Blue Jays that season, and then hung up the gear for good. But he’ll always be remembered for tagging out two baserunners on the same play, one while seated with a broken leg.

In addition to the sources cited in the Notes, the author consulted Baseball-Reference.com and Retrosheet.org for pertinent material and the box scores noted below.

2 Given Barfield’s arm, there was rarely a need for a cutoff man.

3 Bradley graduated from Missouri with a Big Eight record (the conference became the Big 12 in 1996) of 6,459 yards of total offense. He was selected to the all-conference team at quarterback every season from 1978 to 1980. Bernie Miklasz, “Bradley’s Story: With Power Comes Glory,” St. Louis Post-Dispatch, June 25, 1985: 3C.