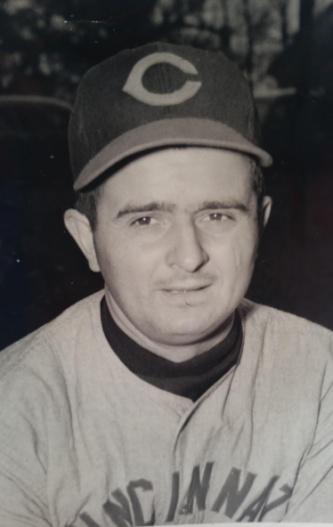 When five Philadelphia Phillies pitchers stopped David Dahl without a hit on August 12, 2016, the Rockies’ rookie left fielder missed an opportunity to post a new MLB record. He’d hit safely in all 17 games of his career since debuting on July 25, tying a record set 75 years earlier by Chuck Aleno of the Cincinnati Reds.

Just as the 22-year-old Dahl had started his year in the minors,1 Aleno started the 1941 season at Indianapolis in Class AA. He’d worked his way up the Cincinnati ladder since 1937 and earned his promotion to Indianapolis by hitting .332 with the Birmingham Barons (Class A-1, Southern Association) in 1940. He was doing even better (.348) through 19 games at Indianapolis when the Reds’ sparkplug third baseman, Bill Werber, went down with a sore knee on May 13.

Cincinnati had won the 1939 and 1940 National League pennants and the 1940 World Series, but when the 24-year-old Aleno debuted as the Reds’ fill-in third baseman at Crosley Field on May 15, 1941, manager Bill McKechnie’s club was already mired in sixth place, 10½ games behind the torrid (22-6) Dodgers. The Reds lost again that night, 5-4 to Philadelphia, but the righty-swinging Aleno singled twice in four at-bats and impressed the local writers.

“Aleno does a good job at the hot corner. He moves around with considerable speed and grace despite his 220 pounds.”2 The praise was tempered, though: “But he’s no Bill Werber as yet by the wildest stretch of the imagination.”3

Aleno had been slotted eighth in the Reds’ batting order for his debut and was there again in the next game, when he collected another two hits against the Phillies. With Aleno demonstrating the ability to handle himself at the plate and with no better option to replace Werber, McKechnie kept the rookie in the lineup and moved him to fifth in the order, between Frank McCormick and Ernie Lombardi, on May 18. Aleno delivered two more hits, this time against Boston Braves’ pitching. He registered two more in his fourth game and was hitting .471 through four games.

McKechnie stuck with Aleno at third base, batting him fifth; he hit safely in the next 13 games. Over 17 games from May 15 through May 31, the stocky line-drive hitter had 28 hits, all but four of them singles. He struck out six times and, making contact on most swings, took only three walks. As the Reds flipped the calendar from their May 31 home date against St. Louis to a doubleheader in New York on Sunday, June 1, Aleno was batting .389 for his small-sample career.4

The Reds hadn’t moved much in the standings since Aleno came aboard—they stood tied for fourth, 12 games behind Brooklyn. The homestanding Giants were third but also well behind the 31-11 (.738) Cardinals, who had overtaken Brooklyn, now a game back. Giants manager Bill Terry sent right-hander “Prince Hal” Schumacher, still only 30 but in his 11th major league season, to the mound for the first game. McKechnie countered with former American League ace Monte Pearson, new to the National League.5

The Reds got Pearson a run in the top of the first inning on a single by Ival Goodman that scored Harry Craft. Aleno ended the inning with a foul pop to third base, stranding Goodman at first. The Giants came back to load the bases in their half, but Pearson escaped on a fly ball by Jo-Jo Moore to Ernie Koy in left field. Mel Ott put New York ahead 2-1 in the Giants’ third with a home run that scored Billy Jurges ahead of him.

Aleno got his next chance in the fourth inning with one out and the bases empty. Schumacher retired him on a liner to Jurges at shortstop. New York padded its lead to 3-1 in the fifth when Babe Young doubled Jurges home, but the Reds responded in their half of the sixth. Lonnie Frey singled with one out, stole second, then moved to third on Goodman’s ground out. Frank McCormick singled Frey in and Aleno came to the plate with a chance to drive in the tying run from first or at least keep the rally going with a hit. Schumacher, though, got him to pop to first baseman Young, closing out the inning and maintaining New York’s 3-2 lead.

The Reds loaded the bases with one out in their seventh, but Schumacher struck out Craft and got Frey on a ground ball. Aleno’s last opportunity to extend his streak came with two outs in the Cincinnati eighth, again with nobody on. He managed to reach base, but only when third baseman Joe Orengo “played beanbag with his easy roller.”6 There was to be no compassionate official scoring — it wasn’t even a Reds’ home game. Orengo was charged with an error. The 3-2 Giants’ lead stood, with Schumacher going the distance for his fourth win of the season. Pearson, the losing pitcher, lasted six innings and gave up all three New York runs before he was relieved by Whitey Moore.

Cincinnati came back to win the June 1 nightcap by an identical 3-2 score. Aleno, still batting fifth, rebounded with a single and a run scored in the fourth inning. He started all of the five games Cincinnati played through June 8, but added only two more hits, including the first of his two career home runs.7 Then he yielded to Bobby Mattick at third base. Werber came back on June 15.

Aleno saw only sporadic action over the rest of the season, but was warranted an expansive sports cartoon in the July 23 Cincinnati Enquirer. The pictorial celebrated his bloop pinch-hit triple which cleared the bases as part of a five-run, ninth-inning rally that lifted the Reds to a 5-4 win over the Dodgers at Crosley Field on July 22.8 Overall, Aleno played in 54 games and had 181 plate appearances in 1941. His once-lofty, streak-driven batting average settled at .243.9

In addition to the sources cited in the Notes, I also used the Baseball-Reference.com and Retrosheet.org. websites for box scores, team and season pages, and batting logs. The cited newspaper articles came from the digitized resources of Newspapers.com. My SABR colleague Kevin Larkin checked Chuck Aleno’s National Baseball Hall of Fame Player file.

1 Dahl started the 2016 season at Class-AA Hartford, where he hit .278 in 76 games. In 16 more games at Class-AAA Albuquerque he showed he was major-league ready with a .484 batting average and an OPS (on-base percentage plus slugging percentage) of 1.417.

5 Cincinnati had acquired Pearson, 31, from the New York Yankees over the 1940-1941 offseason. He had been a stalwart with the Yankees’ 1936-1939 World Series teams, winning a Series start each year without a loss. One of those Series wins had been a two-hitter against the Reds in Game Two of the 1939 Series as New York swept Cincinnati. Pearson’s days in Cincinnati were numbered, however; on August 21, 1941, the Reds sold his contract to Hollywood of the Pacific Coast League. He pitched only five innings there and never played professional baseball again.

9 By comparison, Dahl, called up later in the season, played all three outfield positions in 63 games for Colorado in 2016. He had 237 plate appearances and hit .315.