Until Rennie Stennett matched the feat in September of 1975, only one man in major-league history had recorded seven hits in seven at-bats during a regulation nine-inning game. This rarest of batting achievements was accomplished on June 10, 1892, by Wilbert Robinson, later to become a Hall of Fame manager but at the time a portly catcher for the cellar-dwelling Baltimore Orioles.

The Orioles hosted the St. Louis Browns that Friday at their two-tiered wooden home ground, Union Park. Those who attended the scheduled doubleheader couldn’t have expected anything approaching the history that would unfold before their eyes. The Orioles had won just 10 of their 42 games to that point. The Browns, like the Orioles a remnant of the recently disbanded American Association, stood at 16–27. Those clubs and their fellow Association adoptees to the National League, Louisville and Washington, had formed a cluster at the bottom of the standings where they would remain all season.

It was a cool, overcast summer day with a light breeze blowing in from the northwest when the Browns took the field in the first inning of the opening contest. St. Louis sent veteran pitcher Charlie “Pretzels” Getzien into the box to oppose the Orioles ace right-hander Sadie McMahon. McMahon, 24, was coming off 36- and 35-win seasons. But those victories had been posted in the disbanded American Association, and so far in 1892 McMahon had found the National League to be tougher. His record stood at just 3–10 as the game began.

Pretzels Getzien was at the end of a career that yielded 145 victories, 29 of them with the pennant-winning Detroit Wolverines in 1887. As recently as 1890, Getzien had won 23 games for Boston’s National League team. But that had been his last strong season. Although just 27 years old, he started only 10 games in 1891, winning four and losing six. Nonetheless, in their desire for an experienced arm, the Browns had signed Getzien just a few days before, and he was 2–0 for them as he took to the pitcher’s box in Baltimore.

Orioles batters, who exercised their right under the rules of the time to bat first, were all over Getzien’s offerings from the outset. Billy Shindle led off with a blistering triple to left field, and by the time the first inning ended, the Orioles had sent 10 men to the plate and scored five runs. Robinson, the eighth hitter in the lineup, contributed a single.

Baltimore hitters continued to tee off on Getzien in the second inning, scoring five more runs, with Robinson adding a second single. The veteran hurler was removed at the end of the inning, his team trailing 10–1. He had given up seven hits and 10 runs in two innings of work. Getzien never recovered from the humiliation, losing eight of his final 11 starts before being released in late July.

Joe Young, making his major-league debut and, as it turned out, his only big-league appearance, replaced Getzien in the third inning. Young had been the star hurler for the Mount Carmel team in the Central Pennsylvania League before signing with the Browns, but he could do nothing to stop the Orioles’ onslaught. The Baltimore club pounded him for nine hits and 13 runs during his two innings in the pitcher’s box. Amazingly, the leader of the Orioles assault was Robinson, a career .226 batter entering the season, whose third, fourth, and fifth hits were a single in the third inning, a double in the fourth, and a single in the fifth.

Besides being unable to stop Robinson or the Orioles, the visiting Browns had great difficulty catching up to McMahon’s offerings. They managed only seven hits and four runs. Browns center fielder Steve Brodie, who later gained fame as an Oriole, was the only St. Louis player to make two hits off McMahon.

Left-hander Ted “Theo” Breitenstein came in to start the sixth inning, allowing the Orioles’ 24th and 25th runs but avoiding Robinson, who did not come to the plate. Robinson batted in the seventh, collecting his sixth hit (a single), although the Orioles failed to add to their 25–2 lead. He batted again with two out in the ninth and produced a seventh base hit, his sixth single of the game. That seventh hit was harmless, but Robinson had already done enough damage, driving across 11 runs. The runs batted in were a single-game record that stood until 1924, and represented nearly 20 percent of the runs Robinson sent across the plate for the entire 1892 season.

Robinson was hardly alone in his offensive exploits that June day. The Baltimore lineup, despite the team’s poor record, had its share of talented ballplayers. Future Hall of Famer John McGraw, playing second base in his sophomore season in the majors, connected for three singles in the opener, scored three runs, and stole a base. His double-play partner, shortstop George Shoch, connected for five hits, including a two-bagger, and he scored four runs. Baltimore’s left-handed right fielder, George Van Haltren, swatted two base hits while crossing the plate five times. Third baseman Billy Shindle stroked a double and a triple. Jocko Halligan, Joe Gunson, and Curt Welch each came through with a pair of safeties for the Orioles in the lopsided victory. (Remarkably, despite 32 hits and seven bases on balls for both teams, the game took only an hour and 50 minutes to complete.)

Following his record performance, which included a stolen base, the durable Robinson caught the second game of the doubleheader, garnering two more singles. The result was a 9–3 Orioles victory that looked like a nail-biter in comparison with the opener. Robinson later told the press that his “lamps got tired during the second game” or he would have done better.

McMahon, who was coming off back-to-back 30-win seasons, fell off a bit in 1892, winning just 19 games. The Orioles played inconsistent ball for the rest of the 1892 season and finished with the worst record in the league. But on that one June day in Baltimore, Wilbert Robinson made baseball history. 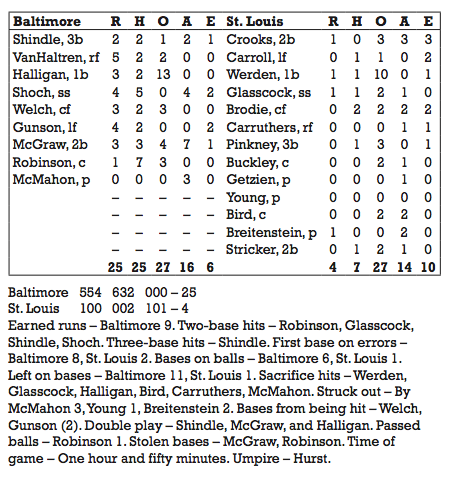