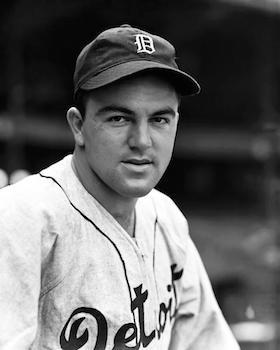 The Detroit Tigers found themselves on a nice little four-game winning streak in early June of 1937. They had taken the final two games of a three-game series against the New York Yankees on June 5-6, and then swept the Philadelphia A’s in a two-game series heading into Friday’s contest against the Boston Red Sox on a beautiful 78-degree afternoon in Detroit’s Navin Field. The Tigers were now in third place, only 1½ games behind the front-running Yankees.

The prospects for victory did not appear great that day, however; the Tigers were going up against Red Sox ace Lefty Grove and, indeed, the Red Sox scored three times in the top of the second for a 3-0 lead. The Tigers countered with two in their half of the second on a Gee Walker home run with Hank Greenberg on base. But when the Tigers’ starter, rookie George Gill surrendered a run in the top of the third, acting manager Del Baker1 summoned another rookie, just recalled from Beaumont of the Texas League. To the Navin Field mound strode one Cletus Elwood “Boots” Poffenberger, a right-hander from the hills of western Maryland who, despite his ultimately short career, would prove to be one of baseball’s most colorful and eccentric characters.

The Tigers had recalled Boots when Schoolboy Rowe developed a sore arm. Poffenberger, a country boy who enjoyed hunting and fishing “had never seen a major league park before joining the Tigers a few days before,” according to Sporting News columnist Richard Farrington.2

Upon his arrival in Detroit, Poffenberger declared to his new teammates, “Just call me ‘Boots’ and on time for meals. I’m here to stay. I am just a young punk from a small town and I don’t know what the hell it is all about, but boy, I can blow that apple in there and when I get smartened up a bit, I’ll give those batters plenty to worry about.”3

There is no record of how his veteran teammates received this announcement.

Gill departed with the bases loaded and one out, but Boots induced a double-play grounder from the first batter he faced, catcher Gene Desautels, to get out of the inning. The Tigers scored three runs in the bottom of the third, but Boots surrendered a run in the top of the fourth, leaving the game tied, 5-5. He shut out the Red Sox the rest of the way, however, and when his teammates scored a run in the bottom of the seventh, Boots Poffenberger was a winner in his major-league debut, over fellow Marylander and future Hall of Famer Lefty Grove.

Grove pitched a complete game with 11 strikeouts, but fell to 3-3 for the season. He went 14-6 the rest of the way, however, making the All-Star team in the process. Boots enjoyed continued success in 1937 as well. He won his next time out, at Washington in front of a busload of fans who had journeyed the 90 miles from his hometown, Williamsport, Maryland, to greet him at Griffith Stadium. In his third start of the season, on July 11, he defeated Bob Feller, 3-2. He ended the 1937 campaign with a 10-5 record. Detroit, which finished second, 13 games behind the Yankees, thought that Boots Poffenberger was about to become a star, but it was not to be. Poffenberger was just too eccentric to last much longer. A newspaper clipping detailed some of his 1937 exploits, which often involved a copious consumption of beer:

Among the more serious charges against Poffy were: That he once was found leading a swing band at 4 a.m. on a day he was due to pitch; that he detoured an up-by-9:30 rule by loading him ham and eggs and then snoozing again until an hour before game time; that he failed to keep a pitching date with the Yankees, prematurely celebrating his success before reaching Yankee stadium; that he consistently revolted against pitching against the Browns and Athletics, preferring opposition to the top-ranking clubs, etc. ,etc., to mention a few.4

The Sporting News ran a story on Boots under the headline “Boots Poffenberger Decides to Be Good to Be Better: ‘If I Can Win Ten Staying Up at Nights, What Can I Do in Shape?’ He Asks.”5 Boots was being neither sarcastic nor smarmy; as everyone from the sportswriters of the day to his surviving friends said, Boots was just being Boots. “The Baron” as he was known to the Detroit sportswriters who thought that Cletus Elwood Poffenberger had a rather regal ring, was sent down to Toledo in August 1938 then sold to Brooklyn at the end of spring training in 1939. He made only three appearances before jumping the Dodgers in May. He then refused to report to Montreal when Brooklyn tried to farm him out. The Dodgers were so exasperated with Boots that they persuaded Commissioner Kenesaw M. Landis to banish him for life. In February 1940, after realizing that Boots still had value, they asked Landis to reinstate Poffenberger so they could sell him to Nashville of the Southern Association. There, Boots won 26 games during the regular season and three more in the playoffs, but even that outstanding performance was not enough to convince a major-league club that the eccentric hurler was worth a gamble.

Boots played nine more years in minor-league and semipro baseball, before retiring from the Hagerstown Owls of the Class B Middle Atlantic League in 1949. This span also included a three-year hitch in the Marine Corps during which he pitched for the powerful Parris Island team and where in 1944 Gene Desautels, the first batter Boots faced in the majors, was his batterymate.

According to all who knew him in later life,6 Boots Poffenberger never lamented the career that might have been, the one that dawned so brightly on a sunny afternoon in Detroit on June 11, 1937.

Boots Poffenberger was born, lived, and is buried in Williamsport, Maryland, the town in which my family and I have resided for 20 years. Boots is still missed in Williamsport by all who knew him despite the fact that he died in 1999. He was so comfortable (if unconventional) in his own skin that he seemed to make everyone around him more comfortable with themselves. In researching my biography of Boots (scheduled to be published in the summer of 2014) I felt as if I got to know him quite well, and I can honestly say that he is the most fascinating person whom I have ever “met.”

1 Baker had taken over for Mickey Cochrane, who had been beaned by the Yankees’ Bump Hadley on May 25. The beaning ended Cochrane’s playing career.

4 Unattributed and undated clipping found in the scrapbook kept by Jo Poffenberger, Boots’ first wife, possibly from a Toledo, Ohio, newspaper. These exploits are chronicled in other sources as well.