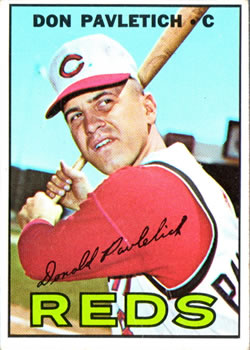 The first-place Reds looked to expand a small lead in the NL pennant race against the perennially downtrodden Astros in a doubleheader at Crosley Field. After jumping out to a 2-0 lead in the first inning of the first game on a double by Vada Pinson and a sacrifice fly by Pete Rose, Cincinnati stopped hitting Houston’s Mike Cuellar and fell, 7-4. Milt Pappas took the loss for the Reds, who hoped for a split behind Sammy Ellis in game two.

But Ellis struggled early in the nightcap. With one out, the Astros scored on Sonny Jackson’s double followed by Jimmy Wynn’s single. Houston threatened to add on after Rusty Staub singled and Eddie Mathews walked to load the bases. But Ron Brand hit into a 5-4-3 double play.

Facing Bo Belinsky, known more for his style off the field than for his performance on it, Cincinnati quickly tied the score. With one out, Lee May, hitting second for the first time in his career, doubled. With two outs, premier RBI man Tony Perez doubled May home. Perez advanced to third on a wild pitch, and Belinsky walked Deron Johnson to put runners on the corners, but Jimmie Coker popped out to end the threat.

Ellis and Belinsky each faced the minimum number of batters in the second inning, but Houston hit Ellis hard in the third. Julio Gotay singled to start the frame. With one out, Jim Wynn, the Toy Cannon, hit a massive blast “just to the left of the scoreboard. … The ball crossed to the edge of the parking lot, landed in the freeway feeder street, bounced up an embankment and came to rest some 600 feet from where it first changed its direction in flight.”1 The homer put the Astros up 3-1. Wynn blossomed as a power hitter of the first order in 1967, when he finished second to Hank Aaron in the NL with 37 homers and made the All-Star team for the first of three times in his 15-year career. Wynn’s campaign was even more impressive considering that Houston as a team hit only 93 round-trippers, and no Astro besides Wynn hit more than 10 in a season when the Astrodome lived up to its reputation as a park that favored pitchers over hitters.

After homering in game one, Bob Aspromonte hit his fifth homer of the season in the fourth inning to extend the Houston lead to 4-1. (Aspromonte played regularly the rest of the season but went more than three months before hitting another homer, which came in the second game of a road doubleheader on September 22 against the New York Mets.)

Ellis got one more out but then walked Belinsky, who had not drawn a walk in more than two years. Cincinnati manager Dave Bristol yanked Ellis to try to prevent the doubleheader, which had looked promising when the day began, from becoming an utter disaster. Bristol found the relief he sought from two surprising sources.

Bob Lee came out of the bullpen for the Reds. Before his purchase from the Los Angeles Dodgers less than two weeks earlier, Lee had pitched exclusively in the Golden State, where his career had gone from a California dream to a nightmare. Lee’s ERAs had worsened every year. With the Angels, Lee had an ERA that went from 1.51 in 1964 to 1.92 in 1965 to 2.74 in 1966. Traded to LA, Lee had a 5.40 ERA in limited action. His early Cincinnati experience went even more poorly. In his debut with the Reds, Lee gave up three runs and got just one out. But on this day, Lee had the goods: His 4⅔ innings of scoreless relief gave Cincinnati the chance to crawl back into the contest.

The comeback began in the bottom of the lucky seventh from an unlikely source when Coker “hit a line drive off the leftfield screen”2 to get Cincinnati within two runs of the Astros. (Coker hit only 16 homers in his nine-year career; this was number 15.)

Houston threatened in the top of the eighth when Gotay tripled with two outs, but Lee stranded retired Jackson on an infield grounder.

With one out in the bottom of the eighth, Belinsky walked Pinson. With Belinsky having gone no more than six innings in any 1967 start to date, manager Grady Hatton yanked southpaw Belinsky and replaced him with Carroll Sembera, a right-hander. Bristol replaced the right-handed-hitting May with left-hander Art Shamsky. The changes worked for the Reds when Shamsky singled Pinson to third, where Rose cashed him in with a sacrifice fly.3 After eight innings, the Astros led 4-3.

Having pinch-hit for Lee in the eighth, Bristol needed a new hurler and surprisingly turned to Pappas, his game-one starter, in Pappas’s second and last relief appearance of the season. Pappas had faced 20 batters in the first game, so one might have thought that Bristol would turn elsewhere, but the unconventional move worked as Pappas pitched around a double by Mathews to keep the Reds within a run of tying the game.

Johnson “touched off the ninth-inning rally when he beat out a high bounder to Bob Aspromonte at third base.”4 Commanding conservatively, Bristol had Coker bunt, and the catcher rewarded his manager by beating out the attempted sacrifice for a single. Managing conventionally, Bristol ordered another bunt with no outs and the tying run on second. Sometimes lightning does strike the same place twice. Tommy Helms beat out his bunt to load the bases with none out. Cincinnati looked set to tie the game easily and likely win it, but the odd inning would soon get even more unusual.

Sembera walked Leo Cardenas with the bases loaded to tie the game. When Bristol sent up Floyd Robinson to bat for Pappas, Hatton replaced Sembera with left-hander Dan Schneider to get the lefty-lefty matchup. But Bristol countered by pinch-hitting the right-handed-hitting Don Pavletich. Needing just a single run to win the game, Pavletich hit the jackpot by bashing a walk-off grand slam, the only grand slam of his 12-season career. Pavletich also set a career high with the only four-RBI game he would ever have in the majors. More important, the blow saved the Reds from a disappointing day by securing a doubleheader split.

Pavletich’s roommate gave the hero a hard time after the game: “All Pav had to do was stand there and get hit and he’d have won the game,” said Coker. “But no, he has to be a big showoff and hit a grand-slammer.”5

Cincinnati won in large part due to big blasts from its backup backstops. In August 1967, another catcher debuted for the Reds. The era of Johnny Bench transformed Cincinnati from a contender to a dominant force in the senior circuit over the next decade.

1 John Wilson, “Wow – That Wynn’s Some Walloper!” The Sporting News, July 1, 1967: 12. In the same article, Wynn complained about a lack of vim in the midst of his power surge: “My body just does not seem to be reacting to the vitamins I’m taking.”

3 The RBI was Rose’s sole contribution to the Cincinnati attack for the nightcap, after which his “hitting streak ended at 11 games” as he had gone 0-3. Earl Lawson, “May Wins a Berth in Bristol’s Game of Musical Chairs,” The Sporting News, June 24, 1967: 12. Rose had only two sacrifice flies all season, and both came on the same day, one in each game of this doubleheader.