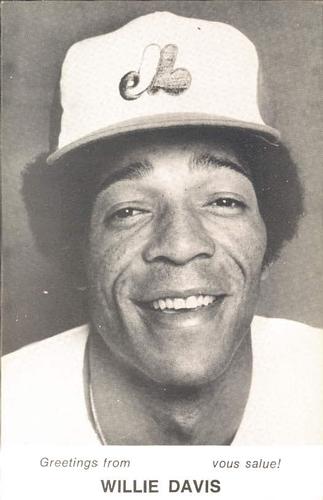 “The Expos exploded in startling fashion,” wrote Ian MacDonald in the Montreal Gazette.1 Trailing 5-1, the Montreal Expos put together the greatest two-inning outburst in teamhistory, scoring 15 runs and sending 21 batters to the plate in the seventh and eighth innings to crush the Cincinnati Reds, 16-6. “I’ve never been in a game where a team scored 15 runs in two innings,” said 18-year veteran first baseman Ron Fairly.2Expos offseason acquisition Willie Davis led the charge with two homers, including a grand slam, and a career-high seven RBIs. “That’s the biggest thrill since I’ve been playing and I’ve had a lot of thrills,” said Davis of the ninth and final game with two round-trippers in his 18-year career.3

On June 11, 1974, the Expos arrived at ParcJarry to play the second game of a three-game set with the reigning National League West champion Reds on a positive note. The night before, they had defeated the Big Red Machine, 3-1, in a game interrupted twice by rain and ultimately called with one out in the top of the ninth inning. More importantly, the victory gave skipper Gene Mauch’s squad a psychological boost, evening its record at 25-25, good for third place in the NL East. The Reds, after a horrible start (13-14), were on a roll, having won 19 of their last 28 games. Skipper Sparky Anderson’s slugging club was aiming for its fourth division crown in five years, but faced an uphill struggle. Despite the hot streak and the second best winning percentage in baseball, they trailed the Los Angeles Dodgers by eight games.

In the previous offseason, the Expos made a startling trade, sending disgruntled fireman Mike Marshall to the Los Angeles Dodgers in exchange for 34-year-old Willie Davis. The 30-year old, right-handed Marshall, arguably baseball’s best reliever at the time, was coming off two superb years. He posted ERAs of 1.78 and 2.66, set a big-league record with 92 appearances in 1973, and finished third and second respectively in Cy Young Award voting.But the outspoken pitcher clashed with Mauch and management. Davis, who had thus far amassed in excess of 2,000 hits in his 14-year career, had held down centerfield for the Dodgers since 1961;he was named to his second All-Star team in 1973 and also earned his third consecutive Gold Glove Award.

The trade benefited both teams. Davis gave the aspiring Expos some much-needed “star power,” andled the club in ’74 in practically every offensive category, including hits (180), runs (86), doubles (27), triples (9), RBIs (89), batting average (.295), and stolen bases (25); while Marshall set a standard for relievers that as of 2014 was still unmatched, with 106 appearances and 206⅓ innings pitched to become the first reliever to win a Cy Young Award.

A sparse crowd of 12,450 spectators showed up at Jarry Park on a cool, windy Tuesday evening. The Expos struck first when their leadoff hitter, leftfielder Mike Jorgensen, connected for his eighth hit in his last 15 at-bats, a solo shot in the bottom of the first offReds starter Roger Nelson. A 30-year-old righty with a 28-32 record in parts of eight big-league seasons, Nelson retired 17 of the next 20 batters, yielding just three hits. “[He] had the Expos eating out of his hand through six,” wrote MacDonald.4

Cincinnati took a 2-1 lead on Johnny Bench’s two-run double in the third inning off Dennis Blair, Montreal’s 20-year-old rookie making just his fourth career start. The Reds chased the ineffective Blair (three earned runs, five hits and four walks in 3⅔ innings) in the fourth with Nelson’s run-scoring single, and tacked on single runs in the fifth and seventh innings to increase their lead to 5-1.

The game’s momentum changed in the bottom of the seventh. Nelson “couldn’t get … his breaking stuff (over),” said shortstop Tim Foli.5 With runners on first and second, catcher Barry Foote slapped a two-out single, driving in third baseman Bob Bailey and opening the floodgates, as the next four batters reached base. After pinch-hitter Ron Woods drew a walk from reliever Tom Hall to load the bases, Jorgensen rapped an RBI single. Foli greeted the normally reliable Pedro Borbon by sinking his teeth into a fastball for another bases-loaded single, driving in two runs to tie the score, 5-5. Willie Davis, who had hit at a .366 clip (41-for-112) in his last 28 games, broke the contest open by sending Borbon’s inside offering careening like a missile over George Foster’s head in right field for a three-run homer and an 8-5 Expos’ lead. “The pitch looked like it might hit him,” said Bench after the game. “That guy must use a matchstick for a bat. He got around so quickly.”6

The Expos, an average club on offense that finished seventh in batting average and runs scored in 1974, continued their unexpected offensive outburst by scoring a franchise-record eight runs in the eighth inning. Following run-scoring singles by Foote and reliever Chuck Taylor off Reds reliever Dick Baney, skipper Sparky Anderson brought in southpaw Mike McQueen to face the left-handed-hitting Davis with two out and the bases loaded. The plan backfired as Davis connected for the fourth and final grand slam of his career, extending Montreal’s lead to 14-5. Two batters later, first sacker Ron Fairly, who had played with Davis on the Dodgers’ three pennant-winning teams of the 1960s, smashed Montreal’s fourth homer of the evening, tying a team record, to make it 16-5. All of the clouts went to right field, aided by a swirling wind.7

Chuck Taylor, who replaced Marshall as the Expos’ closer in 1974 and turned in a careerseason (61 appearances and a 2.17 ERA in 107⅔ innings), pitched the final two innings, yielding two hits and a run in the final frame. He ended the 2-hour, 55-minute contest by punching out Foster and Cesar Geronimo. Expos hurler Tom Walker, who gave up three hits and a run in two innings of relief, was the beneficiary of the Expos’ offensive surge and got the win. Tom Hall was charged with the loss.

“I can never recall a team putting innings back to back like that,” said an incredulous Mauch after the game.8The Expos scored 15 runs in the seventh and eighth innings on 10 hits and 5 walks, and finished the game with 14 safeties. “To be so far behind and come on to win — that’s fantastic,” added an excited Davis, whose 7RBIs tied a team record held by Bob Bailey and John Bateman. “To keep on scoring when you’re ahead, that’s great.”9