“The most wonderful game on record.”1 That’s how contemporary newspaper reports described the no-run, no-hit, no-man-reach-first-base 1–0 triumph by Worcester’s Lee Richmond over Cleveland. Although the term itself wouldn’t be created for more than a quarter-century, it was the first “perfect game” ever pitched.2 Actually, the “perfect” label was applied to one aspect of the game: the Worcester fielding. “Richmond was most effectively supported, every position on the home nine being played to perfection,” reported the next day’s Worcester Daily Spy.3 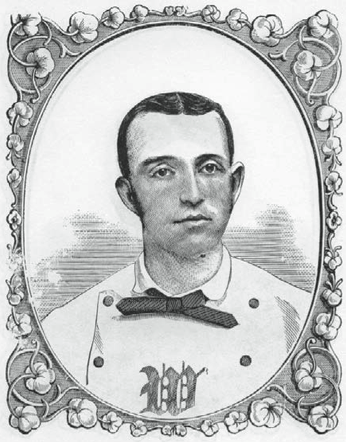 The National League game was played on Saturday, June 12, 1880, at the Worcester (Massachusetts) Agricultural Fairgrounds, also known as Driving Park, and was the second game of a three-game series. The Ohio team came to town in third place, just a half-game behind the upstart Worcesters. Both teams were far behind runaway leader Chicago. In the first game of the series, on Thursday the 10th, Richmond and Worcester had shut out Cleveland, 5–0, the clubs swapping positions in the standings.

A 23-year-old left-hander in his first full season, Lee Richmond was a busy man both on and off the field that week. In fact, his activities prior to his perfect game made the outcome all the more unlikely. Besides being the Worcesters’ front-line pitcher, he was wrapping up his college studies and was scheduled to graduate from Brown University in Providence, Rhode Island, 40 miles down the road from Worcester, on June 16. Richmond skipped Worcester’s Friday exhibition game with Yale University, returning instead to Providence for Brown’s graduation festivities. His classmate, Walter Angell, recorded Richmond’s activities while in Providence in a scrapbook:

I met them (Thursday night) at the depot … and rode out to the Messer St. ball grounds in a carriage. ...We returned at midnight. Next day was Class Day. Richmond went to the Class Supper at Music Hall. He was up all night. He took part in the usual ball game about 4:50 Saturday morning; went to bed about 6:30; took the train for Worcester at 11:30. …4

On Saturday Richmond and Cleveland’s Jim McCormick were matched in what became a classic duel. McCormick was outstanding, giving up three hits and one unearned run while striking out seven and walking one. Richmond, batting second in the order, got the first hit, in the fourth but was erased on a double play. Shortstop Art Irwin led off the fifth with a single. Catcher Charlie Bennett followed with a walk. Then Art Whitney hit a comebacker to McCormick, who threw to second only to see second baseman Fred Dunlap drop the ball. Alertly, Irwin rounded third and kept right on running. Dunlap recovered but threw home wildly for his second error on the play, allowing Irwin to score. McCormick allowed only one more baserunner. Dunlap was an unlikely source for decisive defensive miscues; he was considered a fine fielder. “I used to think Dunlap was the greatest defensive second baseman in the world,” Richmond later said of him.5

As good as McCormick was, Richmond was even better. Of the 27 batters Richmond faced, only two hit fair balls beyond the infield and one of these resulted in a gem-saving play. Leading off the fifth inning, Cleveland first baseman Bill Phillips slapped a Richmond left-handed delivery into right field for an apparent base hit. Lon Knight, the Worcester right fielder and team captain, fielded the sharply hit ball and fired to first in time to retire Phillips. 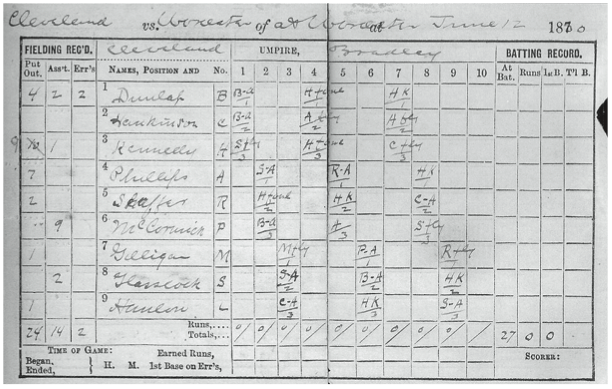 The game was delayed by rain for about five minutes with one out in the bottom of the eighth inning. Richmond then finished the game with the aid of sawdust that he used to dry the ball before every pitch.6 Richmond struck out five in the one-hour, 26-minute game.

The 700 people in attendance also witnessed what might have been the first instance of platooning. Richmond, the game’s first regular left-hander, had been in the league for only about six weeks. Cleveland had not yet seen him, but already the Clevelands knew that right-handed batters might have an edge against the left-handed heaver.7 Because of this, the Cleveland team changed its batting order against Richmond. Immediately before and after the Worcester series, Cleveland’s left-handed hitters, Orator Shafer, Pete Hotaling, and Ned Hanlon, were second, third and fourth in the lineup. For the June 10 game against Worcester, Shaffer was dropped to fourth, Hanlon to seventh, and Hotaling to ninth. For the games of June 12 and 14 Shafer dropped to the number five slot, Hanlon moved to the ninth position, and Hotaling was removed from the lineup. In addition, switch-hitting in order to face the pitcher from the opposite side was employed as a strategy in this game. The Cleveland Leader reported in its June 10 edition, “Hotaling in today’s game will bat righthanded. …”8 Game accounts do not reveal whether Hotaling did turn around against Richmond. Nonetheless, the seed was planted for using the strategies of switch-hitting and platooning that are integral in today’s game.

Cleveland won the series’ final game, 7–1, on Monday, McCormick defeating Richmond. By season’s end, the 23-year-old rookie had won 32 games and lost an equal number as his team finished in fifth place. But the notoriety of pitching professional baseball’s first perfect game went with Richmond throughout his life. He remarked of it, “I can remember almost nothing except that my jump ball and my half stride ball were working splendidly and that Bennett and the boys behind me gave me perfect support.”9 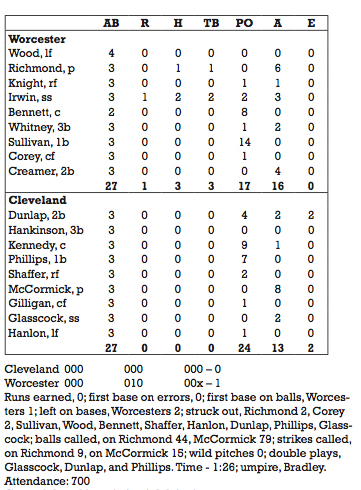