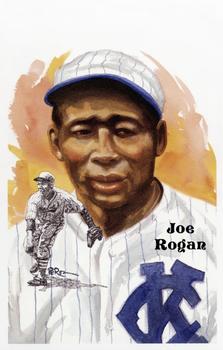 It was the middle of June, and the Kansas City Monarchs were holding down second place in the Negro National Baseball League. Coming into Kansas City for a five-game series were the Cincinnati Cuban Stars, so named because they had many of the best players from the island in their lineup.1

The Cuban Stars had just split a series with the league-leading Detroit Stars, one of their losses being a no-hitter by Detroit’s Bill Gatewood on June 6.2 The Monarchs, meanwhile, had recently completed a trade with the Chicago Giants, acquiring young catcher Frank Duncan, who was described by the Kansas City Times as “the ‘find’ of the 1921 season.”3 Duncan, a Kansas City native, was not fearsome at the plate during his playing career but still started for Kansas City throughout their glory years in the 1920s and managed the team in the 1940s.

In the first game of the series, on June 11, Kansas City defeated the Cuban Stars, 4-2, behind the pitching of Rube Currie, who allowed only two hits and struck out eight. Most of the scoring came in the first inning. The Cuban Stars scored twice in the top of the inning on a walk, a sacrifice hit, a passed ball, and an error, while the Monarchs responded with three runs on three singles and an error. Currie and Cincinnati’s Claudio Manela silenced the bats for the rest of the game, except for a home run by Kansas City’s Dobie Moore in the eighth.4

A superb pitching matchup set the stage for the second game on June 12: the Cuban Stars’ José Leblanc vs. the Monarchs’ Bullet Rogan. Leblanc and Rogan finished 1921 with the two highest WAR totals among pitchers in the Negro National League.5

Born in Cienfuegos, Cuba, in 1894, Leblanc starred in both Cuba and the United States during a four-year career. He was a journeyman catcher in Cuba before becoming a pitcher. He was superb for the Cuban Stars in 1920, going 11-9 with a 200 ERA+. In 1921 the spitballer went 15-12 with a 146+ ERA. Tragically, the 1921 season would be his last. While playing in Cuba in February 1922, Leblanc got into a heated argument with Antonio Susini. Susini used a bat to strike a fatal blow to Leblanc’s head. Leblanc was 28.6

Opposing Leblanc for the Monarchs was Charles “Bullet” Rogan, who was elected to the Baseball Hall of Fame in 1998. Not only was Rogan Kansas City’s ace, but he also was one of its strongest hitters, making him a true two-way star. Duncan, who caught Rogan in this game, said: “If you had to choose between Rogan and Satchel] Paige, you’d pick Rogan because he could hit.”7 Casey Stengel called Rogan one of the best pitchers who ever lived. He featured a good fastball and curveball along with a forkball, palmball, and spitter.

Nine thousand fans filled Association Park for the Sunday game. Built for the minor-league Kansas City Blues, the park hosted the Monarchs’ home games from 1920 to 1923. The ballpark was a single wooden-decked stadium with a 30-foot-high screen in right field.

The visitors jumped out to an early lead, scoring single runs off Rogan in the first and second innings. Leblanc toyed with the Monarchs early, getting them “popping up to the infield” during the first four innings.8

With the score 2-0 heading into the bottom of the fifth, Kansas City’s bats woke up. Left fielder Hurley McNair started the action with a single; Moore followed with a triple. Rogan, demonstrating the two-way skills that resulted in a 141 OPS+ in 1921, drove Moore home with a single, and the game was knotted at 2-2.

After Rogan retired the Cuban Stars in the sixth, Kansas City took the lead in the bottom half. Duncan singled and advanced to third on third baseman Bartolo Portuondo’s single.9 John Donaldson’s fly ball scored Duncan, giving the Monarchs a 3-2 lead.

Kansas City added two runs in the seventh. George Carr, who had been moved from catcher to second base because of Duncan’s acquisition, led off with a base hit. Moore followed with a double and Rogan capped the rally with a single. At the end of seven, it was 5-2 Monarchs.

Rogan ran into trouble in the eighth. The Cuban Stars loaded the bases with one out, and Rogan walked in a run to make the score 5-3. But he got a double-play ball, second baseman Carr to shortstop Moore to first baseman Frank Blattner, to get out of the inning. Kansas City got the run back in the bottom half, as Donaldson singled and advanced home to score.10

With Kansas City holding a 6-3 lead, Rogan came back out for the ninth and pitched an uneventful inning to secure a second consecutive victory for the Monarchs and their 10th win in 11 games. Rogan allowed six hits and three runs in the complete-game win, while striking out six. At the plate, he went 2-for-4 and drove in at least one run. In the matchup between the two best pitchers in the Negro National League in 1921, Rogan got the best of Leblanc, who finished his day allowing six runs while striking out only one.11

The Cuban Stars came back to win the next two games of the series. On June 13 Cincinnati rolled to a 7-1 lead by the sixth inning, and then held off Kansas City’s attempt for a second comeback in two days. The Monarchs scored two in the sixth on a double by McNair and a homer over the right-field wall by Moore and then hammered pitcher Jose Suarez for three runs in the eighth. But the Monarchs could not secure victory, and the Cuban Stars held on for a 7-6 win.12 In its account of the game, the Chicago Defender credited Leblanc, playing right field, with several superb catches.13

The Cuban Stars took the fourth game of the series, 5-4. In this game, the Stars came from behind, scoring two runs in the top of the ninth off Currie to take a one-run lead.14

Kansas City recovered on June 15 to annex the final game of the series, 5-3, giving the Cubans their first series loss of the ’21 campaign. The star of the game was McNair, who had three hits, three runs scored, and one RBI. Rogan pitched the final four innings of the game, striking out two.15

5 According to Seamheads. Rogan led the league with 9.0 WAR, while Leblanc tied with the St. Louis Giants’ Charlie Blackwell for 6.8 WAR.

9 Portuondo was one of two Cuban-born players on the Monarchs roster.

10 The sequence after Donaldson’s hit is unknown.

11 Not to be outdone with the bat, Leblanc had two hits.