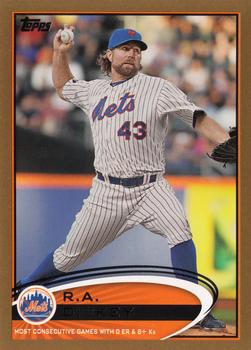 The New York Mets arrived in Florida in mid-June 2012 after losing three games to their crosstown rivals, the New York Yankees. They scored only seven runs against the Yankees but the bats came back alive and they won the first game of the series against the Tampa Bay Rays, 11-2.

The Rays sent their ace, David Price, to the mound in the second game on Wednesday, June 13. In three years, he had become one of the premier pitchers in the game. Price had won his previous two outings to raise his record to 8-3. It was the first time he was facing the Mets.

Price kept the Mets batters in check through the first four innings. The only hit he surrendered was a leadoff single by Andres Torres in the first inning. Although Torres reached third, Price struck out Scott Hairston to end the Mets threat. Over the next three innings, Price stuck out five more Mets batters.

R.A. Dickey took the mound for Mets. He entered the game with a 9-1 record. Dickey had lost on April 18 against the Braves. Since then he had run off seven straight wins. The 37-year-old knuckleballer had become one of the best starters in the game and the anchor of the Mets rotation. “When you look at what he’s done and what he’s accomplished and the way he’s pitching right now, you’ve got to think this guy is one of the top three or four or five pitchers in baseball at this particular moment,” Mets manager Terry Collins said before the game.1

Dickey kept the Rays bats in check in the early innings. After he gave up an infield single to Melvin Upton with two outs in the first, the Rays bats flailed at his knuckleball until the fifth inning. (The Mets later unsuccessfully appealed the scoring on Upton’s single, claiming that David Wright mishandled the ball and it could have been called an error.2) Through the first five innings, Dickey struck out nine Rays.

After four innings of a pitchers’ duel, the Mets offense struck in the fifth. Ike Davis hit a one-out double to right field. Mike Nickeas followed with a single up the middle that scored Davis. Price struck out Omar Quintanilla for the second out but Torres doubled for his second hit of the night. With two runners in scoring position, Daniel Murphy singled. Both runners scored and the Mets had grabbed a 3-0 lead.

The Mets scored twice more in the sixth. After Price gave up four consecutive hits, the score was 5-0. Burke Badenhop replaced Price. He gave up a pair of singles to make the Mets’ lead 7-0 before getting out of the inning.

Meanwhile, Dickey continued to use his knuckleball masterfully over the last four innings. As he accumulated strikeouts, the Rays managed to get just three balls out of the infield. When Nickeas made the final out on a pop fly behind home plate, Dickey had struck out 12 Rays batters and given up just one hit (and he had not walked a batter).

“He’s throwing strikes, and he’s throwing a knuckleball at so many different speeds, so you don’t know what to expect. There is a method to his madness, and it’s been incredibly effective,” said the Rays Carlos Pena, who struck out twice.”3

As he walked off the field, Dickey tipped his cap to the small group of Mets fans who had witnessed his performance. “It was a game where I didn’t really have a [single] regret. I had fun tonight,” Dickey said.4

On the way to his win, Dickey set a Mets franchise record with 32⅔ consecutive scoreless innings. Jerry Koosman had pitched 31⅔ consecutive scoreless innings for the Mets in 1973. “To be mentioned in the same sentence as that guy is pretty special,” Dickey told reporters. “I had a good knuckleball and it was going really well. It makes for a fun night when you’re throwing a lot of strikes.”5

After sweeping the Rays, the Mets hosted Cincinnati and were swept in a three-game series. Next came the Baltimore Orioles. The Mets hoped to erase those losses and stay in contention in the NL East. The Orioles had won seven of their last eight games and were also looking to stay alive in the AL pennant race.

Dickey took the mound for the first game of the series on Monday, June 18 in front of 29,014 fans at Citi Field. He picked up where he left off in Tampa. Through the first four innings, no Orioles batter was able to hit his knuckleball. Dickey struck out seven batters before giving up a single to Wilson Betemit in the fifth inning.

The Orioles’ starter, Jake Arrieta, entered the game with a 3-8 record. After recording six straight losses, he had won his last outing. Arrieta allowed just three hits over the first five innings and once again it appeared that the fans might see a pitchers’ duel.

But the Mets bats came alive in the sixth. Dickey led off with a single. After Jordany Valdespin doubled with one out to put both runners in scoring position, Arrieta walked Lucas Duda to load the bases and set up a double play. Ike Davis stepped to the plate and hit the first pitch over the center field fence for a grand slam. As the crowd roared, Davis trotted around the bases and the Mets had a 4-0 lead.

Arrieta pitched one more inning. Kevin Gregg, who relieved him, gave up another run in the eighth as Valdespin tripled and came home on David Wright’s single.

But the Mets did not need that run as Dickey continued to pitch masterfully. Mark Reynolds’ fly ball to deep center field in the top of the eighth was the Orioles’ hardest hit. Dickey struck out 13 batters on his way to the complete-game victory, the last one being Chris Davis for the final out in the ninth.

“He’s just in a great groove right now,” said the Orioles’ Adam Jones, who grounded out three times in the game. “He’s found his niche, he’s found what works, and he’s attacking hitters with it.”6

“I’m riding a pretty good wave right now,” Dickey said in the locker room after the game. Collins, the Mets' manager, was much more vocal in his admiration for Dickey’s work on the mound. He said, “The Koufaxes and the Seavers and those guys, the greats of the greats, the 97-mile-an-hour fastballs and great curveballs, the Goodens, the Verlanders. This guy is just amazing with that pitch, just amazing,” referring to Dickey’s knuckler.7

Dickey said it was “fairly poetic” that Buck Showalter, who managed him with the Texas Rangers while he struggled to learn the knuckleball six years before, was in the Orioles’ dugout. “The last game he saw me pitch live, I gave up six home runs and tied a modern-day major-league record,” Dickey said of a game he pitched in 2006. “Look, only God could script a narrative like this.”8

With the win, Dickey had not given up an earned run in 42⅔ innings, the second longest stretch in Mets history behind Dwight Gooden’s streak of 49 innings in 1985. Dickey would add to that number when he pitched two more scoreless innings against the Yankees on June 24.

Dickey’s pair of one-hitters allowed him to join a small club. No pitcher had accomplished that feat since Toronto’s Dave Stieb in September of 1988. It was only the eighth time a pitcher threw back-to-back one-hitters. The last National League pitcher to do it was Mort Cooper of the St. Louis Cardinals in 1943.