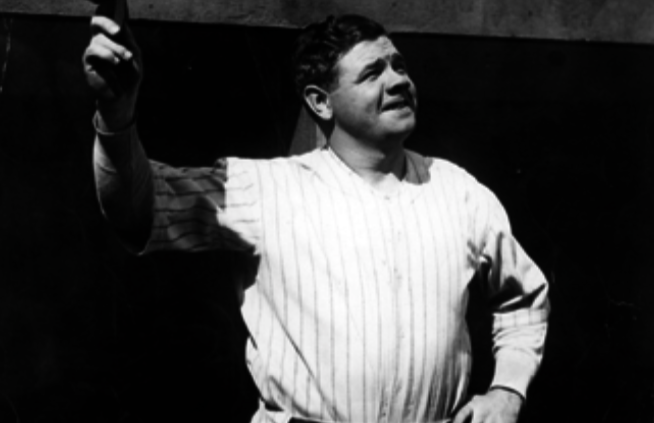 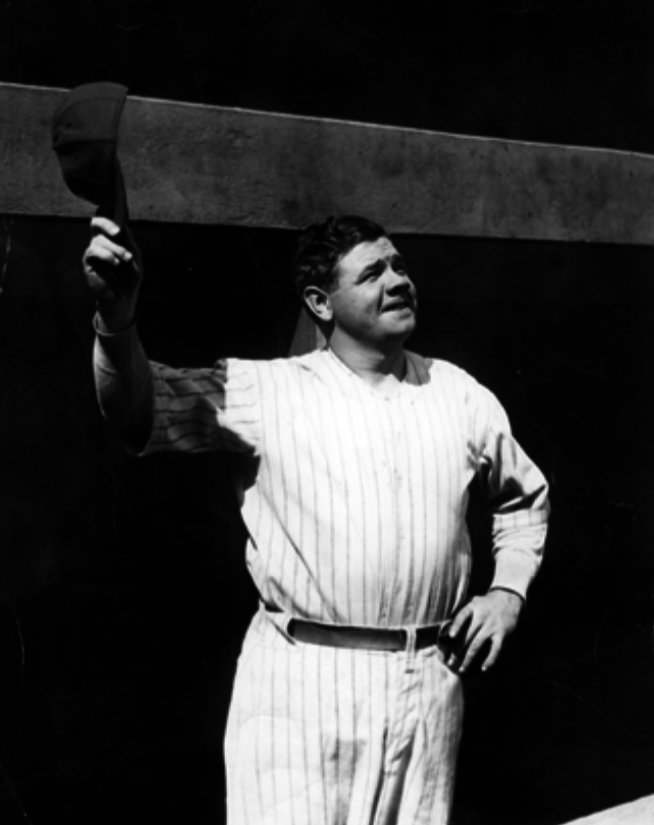 New Yorkers awoke to a dismal morning on June 13, 1948. Raindrops fell in spurts from low, gray clouds. A chill, unusual for late spring, filled the air. Players gathered in the clubhouse at Yankee Stadium. Where was Babe Ruth?

The Yankees had scheduled a celebration on this day to mark the stadium’s 25th anniversary and retire Ruth’s uniform number 3. Team owner Jacob Ruppert held a banquet at his brewery the night before to honor the World Series champion 1923 squad. Ruth, who hit 41 home runs and batted .393 for that year’s version of Murderers’ Row, felt too ill to attend.

Finally, he shuffled into the Yankee Stadium clubhouse, where for so many seasons he told jokes and bawdy stories to teammates and where he regaled newspaper reporters about his home-run exploits. He — the Sultan of Swat — smacked 714 homers during his incredible career, far more than anyone else. He led the majors in home runs 12 times. On this day, Ruth walked slowly, wore a heavy wool overcoat, and looked noticeably thinner than he did in his playing days. Ruth’s nurse, Frank Dulaney, helped remove the overcoat. Dulaney also helped Ruth put on the Yankee uniform one last time. The Babe, 53 years old, was dying from cancer.

The time neared for Ruth to take the field. Dulaney cautioned him to stay in the dugout runway. “It’s too damp here,” Dulaney said.1 Ruth returned to the clubhouse and rested. He tired easily. Public-address announcer Mel Allen rang out the names of the Yankee old-timers. The crowd applauded for former third baseman Joe Dugan, first baseman Wally Pipp, and the others. Some players already had died. The great first baseman Lou Gehrig, the man who replaced Pipp at that position for New York, passed away in 1941 at the age of 37. Pitcher Urban Shocker died in 1928, just 13 days shy of his 38th birthday. Manager Miller Huggins, second baseman Tony Lazzeri, and many others also were gone. Calls of taps rang out at the stadium. “The ceremonies were maudlin,” Leigh Montville wrote in his 2006 Ruth biography The Big Bam.2

At last Allen called out the Babe’s name at the House That Ruth Built, a synonym for Yankee Stadium and a name inspired by the great slugger’s longball exploits. Ruth left his topcoat behind, and the Indians’ Eddie Robinson handed him a bat to use as a cane. Babe moved ever so slowly toward his former teammates.3 The nearly 50,000 fans in attendance roared with appreciation, of course, So did all the Yankees, the ones from 1923 as well as the current squad. Cleveland Indians players cheered from the opposing dugout. W.C. Heinz wrote that Ruth “walked out into the cauldron of sound he must have known better than any other man.”4

New York City Mayor William O’Dwyer spoke for a few minutes. He apologized for the foul weather and then welcomed the entire Yankees team on this silver anniversary day, but especially “Babe Ruth, the hero of all our baseball days.”5 Ruth himself spoke for just a few minutes. The inoperable nasopharyngeal cancer made his voice horse, and it hurt him to talk.6 “I am proud I hit the first home run here in 1923,” Ruth said. “It was marvelous to see 13 of 14 players who were my teammates going back 25 years. I’m telling you it makes me proud and happy to be here.”7

Nat Fein, a 33-year-old photographer from the New York Herald-Tribune, watched the ceremony. Ruth, frail but still with a thick head of hair, held tightly to his makeshift cane in one hand and a Yankees cap in the other. He stood on the third-base line. “He looked tired, very tired,” Fein said of Ruth. “The power that had been his in his youth and manhood were slowly ebbing away.”8 Photographers jockeyed for position along the first-base line near home plate. Yankees players stood just a few feet away.

Fein slipped behind Ruth. The number 3 stood out on the back of the great player’s uniform. Fein knelt in the same fashion as the other photographers. He wanted to capture Ruth from a low angle. “The number 3 was the thing I was interested in,” Fein said many years later. “I felt the only way to tell the story of Babe retiring was from the back.”9 Fein, holding a Speed Graphic news camera, did not use a flash on this dark day. He shot his photo at f5.6 and 1/25 shutter speed10 to achieve depth and detail. Then Babe walked off the field. He met Dugan a few minutes later at a makeshift bar in the locker room. “I’m gone, Joe,” Babe said.11

A two-inning exhibition matchup followed the ceremony. Ruth, who always said he wanted to manage a big-league ballclub but never got the chance, was supposed to serve as skipper of the New York exhibition squad. Too ill, he skipped the affair and left the ballpark.

The actual game pitted a red-hot Indians team, with a 31-13 won-lost record, against a 27-21 Yankees squad. Cleveland had won eight of its previous nine games and built a 3½-game lead in the American League over the second-place Philadelphia Athletics. New York sat in third place, six games out of first.

Fireballer Bob Feller started for Cleveland. Junkball artist Eddie Lopat, a native New Yorker, took the mound for New York. The Indians mounted a scoring chance in the third inning. Feller reached on an error by Yankees third baseman Billy Johnson to lead off the frame, advanced to second on Allie Clark’s one-out single and made it to third on a fielder’s choice. With two out, Eddie Robinson popped up to end the threat. Feller, meanwhile, allowed two walks and a Johnny Lindell single through the first three innings.

The Indians went ahead 1-0 in the fourth inning. Joe Gordon led off with a double and scored on Wally Judnich’s one-out single. Maybe that was all the 29-year-old Feller, already a five-time 20-game winner, would need that day. He put away the Yankees in order in the fourth inning and allowed two hits but no runs in the fifth.

New York finally pushed across two runs in the bottom of the sixth. Joe DiMaggio tripled with one out and jogged home on Yogi Berra’s sixth home run of the season. Feller also gave up a two-out single to George McQuinn but fanned Phil Rizzuto.

Indians player-manager Lou Boudreau pulled Feller after six innings. Rapid Robert gave up two runs, six hits, and two walks. He struck out four Yankees batters. Rookie left-hander Gene Bearden pitched a scoreless seventh inning but ran into trouble in the eighth. DiMaggio led off with his second triple of the game. Berra popped out and Billy Johnson struck out before McQuinn reached on an error that brought home a run. The next batter, Rizzuto, knocked a two-run homer to make the score 5-1, Yankees.

Lopat, who toiled for several years in the minors and finally made it to the majors as a 26-year-old rookie in 1944, nearly threw a complete game. Manager Bucky Harris summoned lefty Joe Page out of the bullpen with two out in the ninth. Lopat had walked Judnich to start the inning. Jim Hegan followed by hitting a home run. Joe Tipton grounded out and Bob Kennedy popped out. Allie Clark’s two-out single kept Cleveland’s hopes alive; Boudreau walked to put runners on first and second. That ended the day for Steady Eddie. Page fanned Eddie Robinson to get the final out and gain his eighth save of the season. Lopat improved his record to 3-5, while Feller dropped to 5-6.

The next day, newspapers reported on both Ruth and the game. The New York Daily News offered a straightforward recount of the action. Hy Turkin wrote that “Feller scattered three harmless singles over the first five rounds, but in the sixth he lost the edge on his fast one and the ball came off Yank bats with more speed than he served it.”12 About Ruth, Joe Trimble wrote “As he stood out there (on the Yankee Stadium field), he was as magnificent as ever — the top showman of them all.”13

Ruth never returned to Yankee Stadium. He spent much of the next few months in a hospital and died on August 16. Nat Fein’s photograph, which appeared on Page 1 of the Herald-Tribune on June 14, won a Pulitzer Prize. Life magazine in 1999 described the photo, titled “The Babe Bows Out,” as “one of the greatest pictures of the 20th century.”14 Fein, who died in 2000 at age 86, once said, “I didn’t think it was a great shot.” Even so, he added that it “got the feeling”15 of that sad moment.

3 The bat that Ruth used belonged to Bob Feller. Feller explained: “Babe Ruth came walking down what was the common runway, because in those days the clubhouses were in the same runway, the third-base runway. Babe came in, and he kind of stumbled a little bit. We went up the steps, and Eddie Robinson, our first baseman, grabbed a bat —it happened to be my bat — and gave it to Babe.” The bat was also a Babe Ruth model. Julia Ruth Stevens and Bill Gilbert, Babe Ruth: Remembering the Bambino in Stories, Photos & Memorabilia (New York: Stewart, Tabori and Chang, 2008), 159.