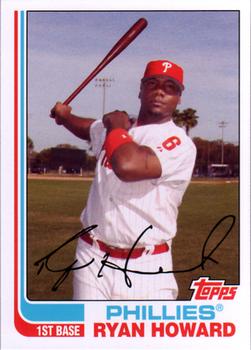 The Philadelphia Phillies and St. Louis entered the opening game of the three-game series, tied for the second-best record in the National League (40-28), 3½ games behind the NL Central-leading Chicago Cubs (43-24).1

Phillies first baseman Ryan Howard was struggling offensively entering this game.3 However, the St. Louis native was hitting his hometown team well. Entering this contest, Howard had a triple-slash line of .328/.446/.784 with 6 home runs and 17 RBIs in 16 games versus the Cardinals.4

After Wellemeyer struck out Jimmy Rollins swinging and got Shane Victorino to ground out to second baseman Adam Kennedy to start the game, the Phillies struck for three consecutive home runs. Chase Utley hit his team-leading 21st to right, Howard went the opposite direction to left for his 16th, and Pat Burrell hit one to left for his 17th. This was not first time the Phillies hit three straight home runs in an inning.5 “The three home runs definitely got us going,” manager Charlie Manuel said. “If that doesn’t get you going. I guess nothing will.”6

The Phillies built on their lead in the second on Carlos Ruiz’s double to left, scoring Pedro Feliz.

The Cardinals got a run in the third on Skip Schumaker’s line-drive home run to right, his third round-tripper of the season.

Then the Phillies erupted in the fourth. The inning started innocently on Ruiz’s groundout to Kennedy. Kendrick hit a two-strike ground-rule double to left, Rollins walked, and Victorino’s full-count single to right loaded the bases. Utley singled to center, scoring Kendrick and Rollins. Wellemeyer was replaced by left-handed relief pitcher Ron Villone.7 Howard’s line-drive single to center on Villone’s first pitch scored Victorino. Burrell walked to load the bases again. He was the sixth straight Phil to reach base. Geoff Jenkins’ sacrifice fly scored Utley. Feliz walked to load the bases for the third time in the inning. Ruiz’s ground-rule double to right-center scored Howard and Burrell. Kendrick hit a two-strike single (his second hit of the inning) to center that scored Feliz. Center fielder Schumaker’s throwing error on Kendrick’s hit allowed Ruiz to score. Rollins followed with his second walk of the inning. Victorino’s second hit of the inning, a double to left, scored Kendrick.8 Utley’s walk loaded the bases for the fourth time in the inning, but Howard struck out swinging to end the inning. The Phillies had sent 15 hitters to bat, scored nine runs on seven hits five walks, and an error, got Wellemeyer and Villone to combine for 69 pitches in the inning, and led 13-1.9

The Phillies scored in the fifth on Feliz’s double to center, scoring Burrell.

In the sixth, Victorino hit a one-out single to right off Mark Worrell.10 Eric Bruntlett, batting for Utley, followed with a single to center, and Howard hit a three-run home run to right, his second of the game and his 17th of the season, giving the Phillies a 17-1 lead. Former Cardinal So Taguchi got one of the biggest cheers of the night when he pinch-hit for Burrell, but he struck out. The Cardinals got a run in the bottom of the inning on Troy Glaus’s single to left that scored Ryan Ludwick.

The Phillies pushed across their final three runs in the eighth. With two outs Cardinals reliever Russ Springer hit Howard on the hip with a pitch and was ejected by home-plate umpire Larry Vanover. Cardinals manager Tony La Russa came out of the dugout to protest and also was ejected by Vanover. (Phillies skipper Manuel suggested that Springer threw at Howard intentionally.11 “‘Ryan stands way off the plate,’ he said. ‘That’s all I’ve got to say.’”)12 Taguchi singled to center and Jenkins doubled to left off Ryan Franklin, scoring Howard and Taguchi.13 Feliz reached on an infield single to third and Ruiz’s line-drive single to center scored Jenkins for the Phillies’ 20th run.14

According to the Elias Sports Bureau, this was the first time since 1900 that the Phillies had scored 20 or more runs twice in a season.15 There was some excitement in the bottom of the eighth. Rudy Seanez threw behind Brendan Ryan with two on base and two out. Third-base coach Jose Oquendo protested that Seanez should have been ejected, and was himself ejected by Vanover. Ryan popped out to Rollins to end the inning.

The Phillies were retired in order in the ninth inning for the only time during the game by infielder Aaron Miles.

“‘Actually we hadn’t been scoring too many,’ manager Charlie Manuel said. “I guess we were waiting to get some tonight.’”16

In addition to the sources cited in the Notes, the author referred to Baseball-Reference.com, Fangraphs.com, MLB.com, and Retrosheet.org for box scores, play-by-plays, and other pertinent information.

1 The Phillies entered the game having scored 25 runs in the first six games of their road trip.

2 Kendrick entered the game second worst among the team’s starters in ERA (4.87), runs allowed (44), batting average allowed (.288), and on-base percentage (.352). However, he had one of the best run-support numbers in baseball since making his major-league debut. His start also came exactly one year after his debut. Wellemeyer entered the game as one of the stingiest pitchers in the NL. He was in the 10 best in the NL in BA allowed (.221, fifth), OBP (.284, seventh), SLG (.357, seventh), and ERA (2.92, eighth). According to Derrick Goold in the St. Louis-Post Dispatch, “Wellemeyer missed his scheduled start Tuesday [June 10 at the Cincinnati Reds] with irritation and a slight impingement in his throwing elbow. It was not enough to put him on the disabled list, but it apparently disrupted his rhythm, at the least (infoweb.newsbank.com/apps/news/document-view?p=AWNB&docref=news/12150AF92D2EBA08).”

3 Howard entered the game, leading the NL with 91 strikeouts and had the worst batting average among qualified hitters (.204).

7 Wellemeyer’s 3⅓ innings pitched versus the Phillies were his shortest start of the season. His eight runs allowed overall and earned were a career-worst as a pitcher. His three home runs allowed were a career-worst as a starting pitcher at the time. He tied it four more times later in the season. His ERA also went from 2.92 to 3.67. His ERA never got below 3.00 for the remainder of the season and his career.

10 This was Worrell’s final appearance with the Cardinals. He was optioned with Joe Mather to Triple-A Memphis on June 14 when Jason Isringhausen was activated off the 15-day DL and Anthony Reyes was recalled from Memphis.

13 Howard’s four runs scored versus the Cardinals were a career-best.

14 Ruiz’s four hits were a career-best at the time. He tied it nine more times. His four RBIs tied a career best at the time. He broke it twice more. The 20 runs scored and 19 RBIs by the Phillies are Busch Stadium III records (through the 2018 season). They previously scored 20 runs versus the Cardinals on May 11, 1923 (at Baker Bowl). The last time the Phillies scored 20 runs in St. Louis was 21 on September 24, 1894 (at Robison Field). This was also the last time they scored 20 runs on the road overall.