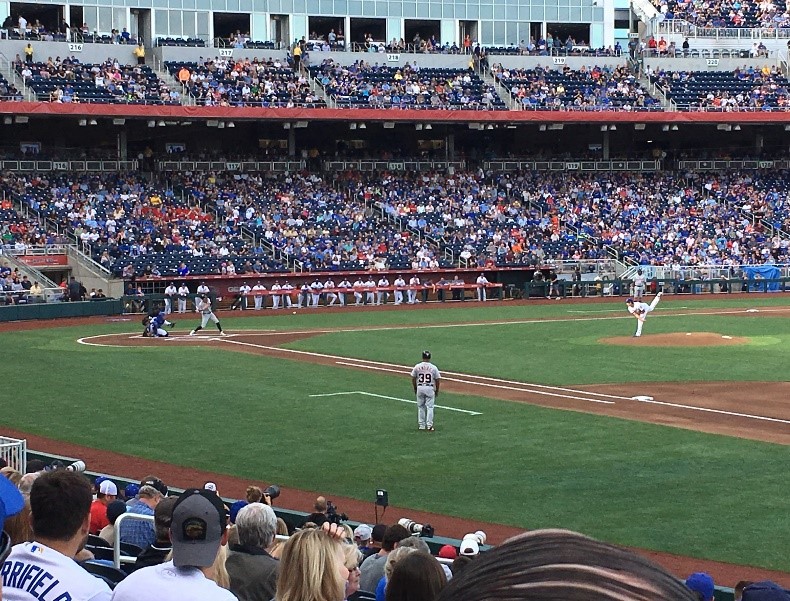 Homer Bailey of the Kansas City Royals throws the first pitch of the game to the Detroit Tigers’ JaCoby Jones on June 13, 2019, at TD Ameritrade Park in Omaha, Nebraska. (Photo courtesy of John Shorey)

This time, it was Omaha’s turn.

Continuing a trend of the major leagues playing games in venues other than their own ballparks, Omaha, Nebraska, welcomed big-league teams in 2019 when the Kansas City Royals hosted the Detroit Tigers at TD Ameritrade Park, home of the College World Series.1

An over-capacity crowd of 25,454 heavily favored the Royals. Omaha, 180 miles north of Kansas City, has hosted the Royals’ Triple-A affiliate since 1969, their first season in the American League.

While the game lacked in drama, it provided a homecoming for several Royals players with Nebraska ties.

The first was rookie second baseman Nicky Lopez, who played his college ball at Creighton University in Omaha. Lopez hit his first major-league home run—a second-inning shot off Tigers starter Matthew Boyd—into the right-field bullpen, giving Kansas City a 1-0 lead. “It was kind of cool. First game back since I was drafted so it was cool.”2

Another was Whit Merrifield, a College World Series legend for his walk-off hit that gave the South Carolina Gamecocks the 2010 championship.3 Merrifield started in right field for the Royals and collected two hits, scored two runs, and had two RBIs.

Merrifield acknowledged that he was conflicted about a return to Omaha. Yes, the 2010 championship was memorable. (Merrifield’s walk-off hit not only won the 2010 tournament, it was also the final at-bat for the College World Series at legendary Rosenblatt Stadium, which had hosted the event since 1950.) But he had spent a full season in Omaha with the Triple-A Storm Chasers in 2015, then returned at the start of the 2016 and 2017 seasons after falling just short of making the Royals out of spring training. “It’s nice to be in Omaha not dying to get out.”4

During previous seasons, the major leagues had scheduled regular-season games in Mexico, Cuba, and Puerto Rico, along with Fort Bragg, North Carolina, an active military base; and Williamsport, Pennsylvania, home of the Little League World Series.5

“Each of these events has helped focus the attention of the United States and major parts of the world on what we think of as the greatest game of the world,” Commissioner Rob Manfred said at a news conference in 2018. “The game here in Omaha will be the next step in this important initiative.” He added: “This may be the best non-major-league facility in North America.”6

Manfred acknowledged that, shortly after he became commissioner in 2015, MLB identified nontraditional ballparks to host games. Omaha, he said, was on that list from the beginning. “Really, our desire to be here had been strong all along, but it was just a question of finding the right opportunity.”7

That opportunity came one day before College World Series opening ceremonies and two days before the first game. ESPN televised the contest, which was considered a home game for the Royals and was the final in a best-of-three series. (The first two were played in Kansas City.)8

Prior to the game, Royal and Tiger players joined the 2019 College World Series teams—Arkansas, Auburn, Florida State, Louisville, Michigan, Mississippi State, Texas Tech, and (eventual champion) Vanderbilt—on the field for the national anthem. Former tournament standouts and Baseball Hall of Famers Barry Larkin and Dave Winfield were introduced. Oregon State’s Adley Rutschman, the 2018 College World Series most outstanding player, was announced as the year’s winner of the Golden Spikes Award, which is presented to the nation’s top amateur player.9

In the second inning, Martin Maldonado followed Lopez’s homer with a double and scored on Boyd’s balk. The Royals added three runs in the fourth, with Merrifield’s two-out, two-run double the big blow. Merrifield later scored on an error by Detroit shortstop Niko Goodrum.

Kansas City scored again in the fifth when Maldonado singled home Jorge Soler. The final Royals run came in the sixth when Merrifield doubled to left and scored on Cheslor Cuthbert’s single to second. The seven runs were Kansas City’s highest run total since May 29; the Royals had scored just seven runs in their previous four games.10

Homer Bailey allowed two hits in six scoreless innings to earn his fifth win for the Royals, while Ian Kennedy recorded his sixth save. Boyd, who pitched for Oregon State in the 2013 College World Series, took his fifth loss of the season. He lasted four innings and threw 94 pitches.

The three Royals pitchers who followed Bailey—Jorge Lopez, Kevin McCarthy, and Wily Peralta—gave up an earned run apiece. Kennedy, who came in with runners on first and second, got Brandon Dixon to fly out to right to end the game and earn the save.

In addition to Merrifield and Lopez, two other Royals had two hits, Maldonado and Cuthbert. Dixon had two hits for Detroit.

Omaha World-Herald columnist Tom Shatel identified one blemish in a memorable night at TD Ameritrade Park: “Only one thing was missing on this perfect night of Nebraska baseball history. Make that one person. Where was Alex?”11

Shatel wrote that “the stage was set” for Gordon’s return, but that he couldn’t answer the call. Gordon was scratched from the lineup because of an injury he suffered the night before in Kansas City when Detroit starter Daniel Norris nailed him in the back during his first at-bat.13

“It’s unfortunate,” Gordon said during a pregame news conference. Kansas City manager Ned Yost explained that he wrestled the night before the game and that day with his decision to sit Gordon. “Alex is a warrior,” Yost said. “Quite frankly, Alex is the heart and soul of our team.”14

Another native Nebraskan, Jake Diekman, also didn’t play, having pitched for the Royals the previous day.15 Diekman grew up in Wymore, Nebraska, and played one year of baseball for Doane College in Crete, Nebraska.

With the Royals and Tigers well behind the AL Central-leading Minnesota Twins, a local sportswriter proclaimed, “In the grand scheme of the MLB season, Thursday night’s game won’t mean much. But that won’t be the case for those involved in the game or in the crowd. No matter the outcome, Thursday will be a historic night in Omaha and a wonderful way to kick off the 2019 CWS.”16

The turnout that night—25,454—supported the writer’s projection. Only one session of the 2019 College World Series, Game 2 between Florida State and Arkansas on June 15, drew a larger crowd.17 The final game of the championship series between Vanderbilt and Michigan drew 20,007. The Royals, up to their game in Omaha, had drawn a larger crowd that season only on Opening Day, when 31,675 attended.

The game did matter for Doris Aylor, a 100-year-old hospice patient who fulfilled a dream by watching the Royals play in person for the first time. The Grand Island, Nebraska, resident arrived at TD Ameritrade in a limousine, and watched the game with her son, her nurse, and a hospice aide. She posed for photos with the Royals mascot, Casey, and the team’s cheerleaders. Mostly, she just wanted to watch the game.18

“Doris had the time of her life last night,” her nurse, Rosie Dinan, said. “She was treated like royalty.”19

The authors live within 15 miles of TD Ameritrade Stadium (renamed Charles Schwab Field Omaha in 2022)—Shorey from Council Bluffs, Iowa, and Warneke from Omaha. They witnessed major-league history in Nebraska.

In addition to the sources cited in the Notes, the authors consulted the Baseball-Reference.com and Retrosheet.org websites for pertinent material and the box scores noted below.

2 Tony Boone, “Welcome to the Show—Former Creighton Standout Enjoys Iconic Moment as a Royal in Return to the Ballpark,” Omaha World-Herald, June 14, 2019: 1C.

7 Basnett, “MLB Had Its Eye on Omaha for Royals-Tigers game.”

9 Boone, “Welcome to the Show—Former Creighton Standout Enjoys Iconic Moment as a Royal In Return to the Ballpark.”

15 Boone, “Welcome to the Show—Former Creighton Standout Enjoys Iconic Moment as a Royal in Return to the Ballpark.”