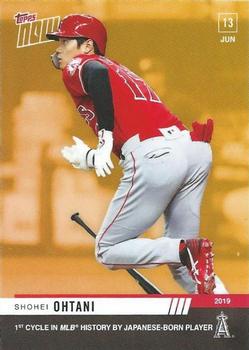 On June 13, 2019, Los Angeles Angels two-way player Shohei Ohtani became the first Japanese-born US major leaguer to hit for the cycle. Ohtani’s cycle was the 326th in baseball history and the eighth for the Angels.

The Angels entered the first of a four-game series on the road against the Tampa Bay Rays. Despite their recent sweep of the Los Angeles Dodgers, the Angels remained 12½ games out of first place in the American League West Division with a 33-35 record, including 14-17 on the road. The Rays entered the matchup a half-game out of first place behind the New York Yankees at 41-26. Despite their success, the Rays struggled to generate fan enthusiasm. The team posted the second lowest average attendance in 2019 at 14,736 despite winning over 90 games and making a postseason appearance.1 The June 13 game fared slightly better than the season average with 15,291 in attendance.

Taking the mound for the Rays was Ryan Yarbrough (5-2, 5.31 ERA), making his fourth start of the season. The Angels hit well (.387) against the second-year pitcher.2 For the Angels, manager Brad Ausmus turned to Tyler Skaggs (4-6). Ohtani, one of the few major leaguers who both pitched and played the field, was recovering from Tommy John surgery, but the 24-year-old still got into games as a designated hitter. He was batting.256 with 7 home runs and 23 RBIs.

Leading off for the visiting Angels, Tommy LaStella, having an All-Star season, punched a liner into the right-field corner for a double. Mike Trout was hit by a high inside fastball on an 0-and-2 count. Ohtani, the next batter, took a ball and a strike. The next pitch, an 89-mph sinker, caught too much of the plate and Ohtani took a full swing.3 With a launch angle of 19 degrees and an exit velocity of 110.6 mph, the ball went 414 feet over the center-field wall for a three-run homer.4 After the home run, Yarbrough walked Albert Pujols and hit César Puello, but got two strikeouts and a fielder’s choice grounder to exit the inning.

After a scoreless second inning, Ohtani led off in the top of the third. Swinging on the first pitch, he drove the ball into the gap in left-center for a double. But Yarbrough retired the next three batters and Ohtani was left stranded at second base. Both pitchers dominated through the bottom of the fourth, a stretch that was interrupted for 36 minutes by a power failure in the ballpark.5

In the fifth inning, Ohtani returned to the plate with two outs and the bases empty. Yarbrough threw him six straight sliders, and Ohtani made hard contact on the sixth, one sending the ball into the right-field corner.6 The speedy Ohtani easily chalked up a standup triple. Up next, Pujols hit a 427-foot home run, his 200th as an Angel, extending the team’s lead to 5-0. With the home run, Pujols joined Jimmie Foxx, Ken Griffey Jr., Mark McGwire, Rafael Palmeiro, and Manny Ramirez as the only players to hit 200 home runs with multiple teams.7

The bottom of the inning proved difficult for Skaggs: He surrendered three runs on five hits, making the score 5-3. Yarbrough set down the Angels 1-2-3 in the top of the sixth, and Angels reliever Noe Ramirez, replacing Skaggs to start the sixth inning, also had a 1-2-3 inning.

Ohtani came to bat again in the top of the seventh, facing Rays reliever Hunter Wood. With two outs and a runner at first base, Ohtani needed a single to hit for the cycle. Before stepping up to the plate, he told teammate David Fletcher that he wanted to hit another home run instead of a single.8 “I don’t think he was trying to hit a single. He was definitely trying to hit another home run, if you watch the at-bat,” Fletcher said after the game.9 To add further complications to Ohtani’s cycle attempt, the Rays defense moved into a shift with three infielders between first and second bases and the third baseman playing slightly to the left of second base. Still, after battling through seven pitches into a full count, Ohtani lofted a single into the shallow gap in right-center field, an area out of reach of any of the Rays defenders. With the single, he became the first Japanese-born US major leaguer to hit for the cycle. Ohtani received a standing ovation from the crowd, and there were celebrations on the Angels bench. The half-inning ended when Pujols flied out. The rest of the game was scoreless.

Ohtani became the seventh Angels player to hit for the cycle, joining Jim Fregosi (1964 and 1968), Dan Ford (1979), Dave Winfield (1991), Jeff Davanon (2004), Chone Figgins (2006), and Trout (2013). Responding to a postgame question about being the first Japanese player to hit for the cycle, Ohtani said, “Simply very happy to accomplish this. There’s been so many great Japanese players that have come before me. Being the first one to accomplish it [makes me] really happy and makes for a lot of confidence down the road.”10 Other Japanese players have come close, mainly Ichiro Suzuki, who had 21 shots at hitting for the cycle but failed by missing a double twice, a triple 10 times, and a home run nine times.11 Hideki Matsui of the New York Yankees came close in Game Six of the 2009 World Series, when he became the first Japanese-born player to win a World Series MVP award, hitting a home run, double and single.12

Hitting for the cycle is relatively rare in the Japanese professional leagues. There have been only 74 cycles, hit by 69 players, compared with the 330 that have been hit in the US major leagues. (The Japanese season is shorter too, currently 143 games.)13 The first Japanese cycle occurred on October 2, 1948, by Fumio Fujimura of the Osaka Tigers. In the 2019 season, only one player, Ryutaro Umeno of the Hanshin Tigers, hit for the cycle.14 Ohtani’s cycle was the second of the season, and the next day, June 14, Jake Bauers of the Cleveland Indians hit for the third, against the Detroit Tigers. Overall, six players hit for the cycle in 2019 including Jorge Polanco, Trea Turner, Jonathan Villar, and Cavan Biggio in addition to Ohtani and Bauer.