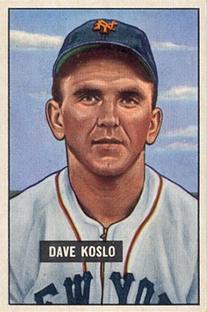 This article was written by John Burbridge

On a hot and sweltering Sunday afternoon, the New York Giants played the St. Louis Cardinals in the second game of a doubleheader after blowing an 11-0 fourth-inning lead in the first game and losing 14-12 as the Cardinals orchestrated an improbable comeback. Would the Giants be able to rebound after such a defeat? That was a major question for the fans still in in the ballpark. The announced attendance for the doubleheader was 41,889 but many had headed for their cars and the subways, given the length of the first game and the heat.

Leo Durocher, the Giants manager, called upon Dave Koslo to start the second game. Koslo, a crafty lefty, led the National League in ERA (2.50) in 1949 and had pitched well in the 1951 World Series against the New York Yankees. He had a complete-game, 5-1 win in Game One and pitched fairly effectively in Game Six although he was the losing pitcher. Koslo had been a nemesis of the Cardinals, winning his last 10 decisions against them, two in 1952. The last time the Cardinals got the upper hand against Koslo was on June 11, 1950.1 Eddie Stanky, the Cardinals manager,2 went with Gerry Staley, who was 9-3. (One of his defeats was a 3-1 loss to Koslo on May 3.)

Even with the heat, the only change in the lineup for the Cardinals in this second game was that Les Fusselman was the catcher, after Del Rice caught the opener. Red Schoendienst, Stan Musial, and Enos Slaughter, all future Hall of Famers, were back in the Cardinals lineup. Slaughter and Solly Hemus were the hitting heroes for St. Louis in game one, Slaughter with a home run and five RBIs and Hemus with two home runs. The Giants starting lineup was the same as the one for the first game, and included Alvin Dark, Don Mueller, Bobby Thomson, and Wes Westrum. Westrum was the hitting hero for the Giants in the first game with a home run and four RBIs.

Hemus led off the game with a single to right but Koslo grabbed Schoendienst’s comebacker and started a double play. Musial’s fly to right ended the half-inning. In the bottom of the inning, Staley walked Lockman with one out but retired Bobby Thomson and Hank Thompson. In the Cardinals’ second, Peanuts Lowrey reached first base with one out on Bobby Thomson’s error at third base but Slaughter popped up to Thomson and Tommy Glaviano flied out to center field. The Giants went down in order in the bottom of the inning. Fusselman led off the top of the third with a single to center and went to second on Staley’s groundball but was stranded there. Staley retired the Giants in order in the bottom of the inning.

Both pitchers appeared to be in top form. Koslo gave up two hits in the fourth. Musial led off with an infield single but was erased in a double play. Lowrey doubled to right field but Slaughter grounded out. The Giants went out in order in the bottom half of the inning. After walking Lockman in the first inning, Staley had retired 11 Giants in a row.

Koslo retired the Cardinals one-two-three in the fifth. Bob Elliott led off the Giants fifth with their first hit, a single to center. Mueller sacrificed Elliott to second and Dark beat out a hit to third base, bringing up Westrum, the hitting hero of the first game for the Giants. Westrum smacked a home run into the left-field stands, giving the Giants a 3-0 lead. Staley struck out Koslo but hit Davey Williams and yielded a single to Lockman. Bobby Thomson’s fly ball to right field ended the inning.

Before the eighth inning began, the umpires called the game due to the “threat of darkness.”3 (The New York Times account simply says “darkness.”4) Since the first game of the doubleheader started at 2:00 P.M. and took 3 hours and 22 minutes to complete, it was about 5:47 P.M. when the second game started (assuming 25 minutes between games). It took 1 hour and 50 minutes to play the seven innings, so it was approximately 7:37 P.M. when the second game was called. On June 15 the sun would have set at around 8:30 P.M. in New York City.

While the Polo Grounds had lights, both the National and American Leagues at that time prohibited Sunday night games or the turning on of lights to complete a Sunday day game.

As for the “darkness” factor: The weather forecast printed in the New York Times that day for New York City and Vicinity said, “Warm today with some cloudiness and a chance of thunder showers late today …” Darkening skies may have prompted the umpires’ decision.

No matter what the reason, the game was called and was official. In the St. Louis accounts of the game, there is no mention of Cardinal protests over calling the game.5

The pitching hero for the Giants was Dave Koslo, who once again defeated Staley in a 3-0 game. With this victory, Koslo had been the winning pitcher in his last 11 games against St. Louis. The hitting star for the Giants was their catcher, Wes Westrum, whose three-run home run accounted for all the scoring. Given his first-game hitting, Westrum finished the day with two home runs and seven RBIs. He had also hit a home run against the Cardinals in the Saturday game, giving him three home runs for the series. Staley, while giving up just five hits, was the losing pitcher. His record now stood at nine wins and four losses.

Given a Dodgers loss against the Cincinnati Reds at Ebbets Field, the Giants were able to gain a game with their win in the second game. But they had lost a half-game with their defeat in game one. The Giants were now 3½ games behind the league-leading Dodgers. The Cardinals with their doubleheader split were at 28 wins and 28 losses and were now 11 games behind Brooklyn. As the season progressed, there was no stopping the Dodgers, although the Giants did put on a bit of a second half surge. But they ended up finishing second 4½ games behind the pennant winning Dodgers. The Cardinals improved considerably and finished the season with 88 wins and 66 losses. In their last 98 games, they were 22 games above .500,, finishing 8½ games behind Brooklyn.

Thanks to SABR members David Emeigh, Charlie Bevis, and Chad Osborne for their input as to the reasons why the game was called.

2 Stanky had played for the Giants in their pennant-winning year of 1951. He was traded to the Cardinals in the offseason to assume the role of player-manager. Associated Press, “Stanky Signs 2-Year Contract in St. Louis as Player-Manager of Cardinals,” New York Times, December 12, 1951: 65.