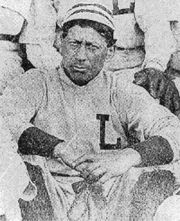 There’s a feeling of awe and respect when the name of Amos Rusie is mentioned — one of the pitchers who is destined to live in base ball history as long as the memory of the game remains.

The Cleveland club of the National League was known as the Spiders until Louis Sockalexis joined the team in the spring of 1897 and sportswriters began calling them the Indians. A tremendous all-around athlete, Sockalexis was a rookie sensation and the first Native American to play in the league.

On Wednesday, June 16, 1897, Sockalexis and the Cleveland Indians played the New York Giants at the Polo Grounds in New York in the first game of a four-game series. The starting pitchers were Frank “Zeke” Wilson for the Indians and Amos Rusie for the Giants. New York fans were thrilled to have Rusie back with the team. The hard-throwing ace won an average of 31 games per season for the Giants from 1890 to 1895, but he sat out the entire 1896 season in a contract dispute.

The attendance on June 16 was somewhere between 3,000 and 5,200, according to sources (listed below). Fans were anxious to get their first look at Sockalexis, the Indian phenom, and they greeted him with war whoops and yells. As the third hitter in the Cleveland lineup, he stepped to the plate to face Rusie with two outs and the bases empty in the top of the first inning. Sockalexis was a left-handed batter, and Rusie was a right-handed pitcher.

Sockalexis swung hard and missed Rusie’s first pitch, and while Sockalexis was out of position, Rusie quick-pitched his second offering. Sockalexis “made a wild stab at it”3 and sent a line drive to deep right field, beyond the reach of Mike Tiernan, the Giants right fielder. While Tiernan chased the ball, the speedy Indian circled the bases for a home run. It was Sockalexis’s third career home run and only the second home run allowed by Rusie during the 1897 season.

But the tables turned in the bottom half of the inning. With one out, Tiernan drilled a liner at Sockalexis in right field, which Sockalexis misplayed. Tiernan reached third base on the error and scored on Bill Joyce’s fly ball.

The Indians scored twice in the fourth inning, on singles by Patsy Tebeau and Ed McKean, a balk by Rusie, and a single by Jack O’Connor. In the seventh inning, defensive lapses by the Giants gave the Indians two more runs. George Davis, the Giants shortstop, fielded a grounder from Wilson and threw high to first base, enabling Wilson to get aboard. Jesse Burkett, who led the National League with a .410 batting average in 1896, followed with a single; Wilson advanced to third base on the hit, and Burkett went to second on the throw-in.

Bill Joyce was the Giants third baseman and playing manager. He snared a line drive off the bat of Cupid Childs but missed an opportunity to double up Burkett, who had drifted off second base. Joyce was then roundly hissed by fans when he fumbled Sockalexis’s little dribbler, allowing Wilson to score. Bobby Wallace lifted a fly ball to left field that was muffed by Ducky Holmes; the bases were now loaded and more hissing was heard from the New York faithful. Burkett came home on Tebeau’s sacrifice bunt with the second run of the inning, before Rusie got out of the jam.

The hoots and hisses from the fans continued and were aimed especially at Joyce. With one out in the bottom of the seventh, Jack Warner was hit by a Wilson pitch, and Willie Clark stroked a double. As Warner rounded third base and headed home, he was held up by Joyce, who was coaching along the third-base line. His coaching, though, resulted in Warner being tagged out in a rundown, and the fans expressed their displeasure.

The Indians added two more runs in the top of the ninth. Burkett and Childs singled to start the inning, and Wallace brought them home with a rousing triple to deep right field.

The Giants got a run in the bottom of the ninth. With two outs, Warner reached base on an error by shortstop McKean and scored on Clark’s double to right-center. Clark, though, was thrown out trying to stretch his double into a triple.

The final score was Cleveland Indians 7, New York Giants 2. Wilson pitched impressively. He allowed only six hits and no earned runs in the victory.

Fleitz, David L. Louis Sockalexis: The First Cleveland Indian (Jefferson, North Carolina: McFarland, 2002). Sockalexis’s meteoric rise, and subsequent fall due to alcoholism, are well documented in this biography. The home run he hit off Rusie in this game was the last of his short major-league career.

1 From a poem by R.K. Munkittrick that appeared in the New York Journal and was reprinted in the Cleveland Plain Dealer, May 7, 1897.