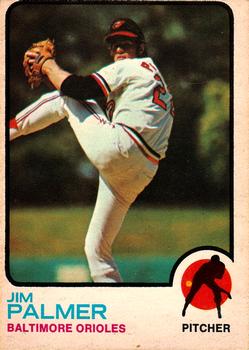 Jim Palmer was attempting to recover from an intestinal virus as he entered his start against the Texas Rangers. He reported that he’d slept 28 of the 50 hours leading up to the game. “I felt pretty good this morning when I got up,” Palmer said, “but then I felt a little dizzy about a half an hour before the game.”1 The fact that he’d been wild, walking 16 batters in his previous 22⅓ innings, combined with the fact that he was ill, didn’t seem like a recipe for success.

Palmer’s teammates gave him great support early on, jumping all over Rangers starter Steve Dunning in the first inning. Al Bumbry led off with a walk and stole second. Dunning retired the next two batters, but after walking Tommy Davis, he surrendered an RBI single to Earl Williams to put the Orioles up 1-0. Paul Blair’s double brought home Davis and sent Williams to third. Brooks Robinson drew a walk to load the bases. The next batter, Elrod Hendricks, laced the ball toward right and Larry Biittner was unable to leg it down. Biittner “slipped on a muddy warning track” and “by the time order was restored” Hendricks was at third with a three-run triple, and Baltimore had a 5-0 lead.2

The Orioles tacked on a few more runs in the fourth, with three singles, two walks, and a sacrifice fly. Bobby Grich had the big hit of the inning, a two-run single, and Blair had the sacrifice fly to give Baltimore a commanding 8-0 lead.

Palmer was rolling, showing no outward signs of the ailment that had left him indisposed the last two days. Through five innings he retired the Rangers in order on 10 fly outs, two groundouts, and three strikeouts. As he continued to mow down the Rangers in order, he became aware that he might be in the midst of a historic outing. “I told (Orioles outfielder) Rich Coggins at the end of the fifth inning that I knew I had a perfect game going and that since I had gone this far, I would have to go for it,” Palmer said.3

Palmer’s perfect night looked to be in jeopardy a few times, but some nice defensive plays kept it intact. Ken Suarez almost broke through with a hit in the sixth, when he hit a smash toward first base that “handcuffed Earl Williams temporarily, but the big catcher-infielder held on and won a race to the bag.”4 In the seventh, Toby Harrah drove a ball that initially looked as if it might be over Paul Blair’s head. But the speedy center fielder was able to track it down with a nice catch on the warning track.

Blair, who already had an RBI double, an infield hit, and a sacrifice fly in the game, added to the Orioles’ lead in the seventh. He collected his third hit, a solo home run to left off reliever Steve Foucault, to put Baltimore up 9-0.

The Rangers hit a couple rockets off Palmer in the eighth. Rico Carty lined a shot to second baseman Bobby Grich for the first out of the inning. After Alex Johnson grounded out to Mark Belanger, Biittner hit a hard smash to left that Al Bumbry squeezed for the third out.

Palmer took the mound in the ninth attempting to throw the 10th perfect game in the history of the major leagues and the first since Catfish Hunter hurled one for Oakland in 1968. He was also trying to throw his second career no-hitter, having already accomplished the feat against the A’s in 1969. Palmer faced Vic Harris, Ken Suarez, and Jim Mason in the final frame in his quest for baseball history.

Palmer struck out Harris to begin the ninth, the 25th consecutive batter he retired, as the Memorial Stadium crowd erupted. Up stepped Ken Suarez, a 5-foot-9 catcher who was hitting .320 entering the game. Before the inning, Palmer joked with Hendricks about the prospect of walking Suarez if he retired Harris. “Suarez had hit the ball hard twice,” Palmer later said, “and I knew I couldn’t strike him out the way he chokes up.”5 Palmer, who’d been ahead of hitters all day, threw two straight balls to start Suarez off. Hendricks later joked that “Jimmy was only kidding (about walking Suarez,) but after he threw two balls, I started to believe him.”6

The diminutive Suarez said he went up looking for a fastball, “because I didn’t think he could throw the curve for a strike – because of my size.” He added, “I had decided that I wasn’t going to walk – not if he threw me strikes.”7

Palmer threw a 2-and-0 fastball that Suarez drilled up the middle. Shortstop Mark Belanger dove but was unable to corral the ball, as it went into center field for the Rangers’ first hit of the game. “I never touched the ball,” Belanger said, “but I wasn’t that far away.”8 Belanger noted that he normally played Suarez toward the second-base bag, but when the count went to 2-and-0, he moved “about a quarter-step” toward third.9 “With a 2-and-0 count, I thought Jimmy would just try to get the ball over and I didn’t want a cheap hit in the hole.”10 Commenting on whether he would have gotten to the ball if he hadn’t moved to his right, the slick-fielding shortstop said, “I don’t know if I would have gotten to the ball or not, but I wasn’t far from it as it was.”11

After surrendering the first hit of the game, Palmer gave up his first walk, to Jim Mason, moving Suarez to second. The next batter, Dave Nelson, grounded a curveball up the middle for the second hit of the inning, driving home Suarez and ending the shutout. “I didn’t let up,” Palmer said, “but sometimes a club can catch fire for a minute or two, I guess that’s what happened to them.”12 With runners at the corners, Palmer got Toby Harrah to hit into a 6-4-3 double play to end the game.

Palmer had thrown a complete game, allowing one run on two hits and a walk, while striking out six. He retired 25 batters in a row until Suarez’s single broke the streak. Palmer commented on his failed effort at perfection, saying, “It would be nice, but the idea is to win, so I’m not disappointed. It was fun.”13

Palmer was worn out from his complete-game effort after spending two days bedridden with the flu. “I’m tired now,” he said, “but when you’re working on a no-hitter, you’re not tired.” He added “I would have been sicker if I had stayed home and heard us get those nine runs without me pitching.”14