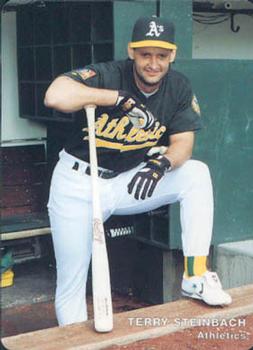 This article was written by Peter Seidel

On a normal day an 11-10 baseball game would dominate the back pages. However, so many noteworthy events took place the day before this game that it’s understandable if a barnburner like this got overlooked. Sports fans living in New York might have felt that June 17 couldn’t have begun any better, with a ticker-tape parade on Broadway celebrating the “cursed” New York Rangers’ first Stanley Cup championship in 54 years. Other noteworthy events of the day included the start of the 1994 World Cup, hosted for the first time in the United States, as well as the opening round of the US Open, which would be the final Open for Arnold Palmer.

But what many most looked forward to that day was watching Game Five of the NBA finals between the New York Knicks and the Houston Rockets. These games were defensive battles, ugly games if you weren’t a fan of either team. Knicks fans were ecstatic watching their team build an 11-point lead midway through the third quarter. After Robert Horry drained a three-pointer to cut the lead to eight points, something peculiar happened. NBC News interrupted the game to cover the O.J. Simpson police chase.

Perhaps the perfect remedy to a surreal June 17 would be an entertaining beer league softball game on a hot Saturday night with plenty of offense. The A’s-Rangers game in Arlington, Texas, was certainly that. The A’s were two years removed from a six-game ALCS loss to the Toronto Blue Jays and while they still had Mark McGwire and Rickey Henderson (returned for his third stint with Oakland), nobody confused this team with those Bash Brothers teams.

The Ballpark at Arlington was the brand-new home of the Texas Rangers, having opened a mere two months earlier. Despite a 31-34 record and having lost six out of their last seven games, the Rangers sat on top of a weak and newly realigned AL West Division.

All you needed to do was look at the ERAs for the starting pitchers and you knew you were in for a high-scoring game. Bruce Hurst (2-1, 6.69 ERA), who missed most of the 1993 season with a torn rotator cuff, took the mound for Texas and former Ranger Bobby Witt (4-7, 5.84 ERA) countered for the A’s.

Hurst’s first mistake was walking Henderson to start the game. He took second on Stan Javier’s sacrifice and scored on Geronimo Berroa’s single. Berroa was thrown out trying to stretch his hit into a double thanks to a perfect throw by Rangers left fielder Juan González.

Oakland catcher Terry Steinbach led off the top of the second by hitting a weak grounder that Texas third baseman Dean Palmer was able to field but couldn’t throw out Steinbach. McGwire, making his first start since coming off the disabled list, blooped one to left-center field that was almost caught by a diving González. It sent Steinbach to third, giving Oakland runners at the corners with no outs. Second baseman Brent Gates’s sacrifice fly to deep left-center field plated Steinbach, giving Oakland a 2-0 lead.

With one out in the bottom of the second González smacked a single to center field, the Rangers’ first hit. Pudge Rodríguez’s dribbler to first allowed González to advance to second with two outs. After walking Doug Strange on four pitches, Witt surrendered a three-run home run to Palmer, putting the Rangers ahead 3-2.

The Rangers’ lead was short-lived. After striking out Henderson and Stan Javier in the top of the third, Hurst allowed three straight doubles to let the A’s reclaim the lead, 4-3. Dan Smith replaced an ineffective Hurst to start the top of the fourth. It turned out to be Hurst’s last major-league appearance; he retired from baseball the next day. Rangers manager Terry Kennedy said of Hurst, “[H]e indicated to us he wasn’t helping the team. We tried to tell him we like what he was doing and we would give him all the time he needed. But he wasn’t pitching like he could. He’s 36 years old and you’ve got to feel inside that you’re enjoying it. Bruce said he wasn’t. I respect his decision, but we’re going to miss him. I still think he can do some things to help us.”1 Hurst will be remembered best for his stellar 1986 World Series performance for the Red Sox when he went 2-0 with a 1.96 ERA vs. the Mets.

With one out in the fourth, Smith allowed back-to-back singles to Mike Bordick and Craig Paquette with Rickey Henderson on deck. With a full count, Bordick and Paquette were running on the next pitch. While Smith got Henderson looking at strike three, Rodríguez’s throw should have nailed Bordick at third, giving Texas an inning-ending strikeout/throw-out double play. But Palmer couldn’t handle the throw; the ball glanced off his glove, caromed off third-base umpire Dave Phillips, and rolled into center field, allowing Bordick to score easily and giving the A’s a 5-3 lead. The Rangers TV analyst, former catcher Jim Sundberg, noted that while the Rangers had a high-flying offense in 1994 they really needed “better, more consistent pitching and better defense,” and that this play exemplified their bad defense.2

Berroa led off the top of the fifth and drilled Smith’s second pitch to him over the left-field wall, extending the Oakland lead to 6-3. In the bottom of the inning, Palmer atoned for his costly error in the fourth by sending Witt’s first pitch to him over the wall in center field to get the Rangers back within two. After Witt loaded the bases on two walks and a single by Rusty Greer, Will Clark’s single to center scored Oddibe McDowell and Greer, tying the game, 6-6.

After allowing at least one run in the first five innings, the Rangers bullpen settled down and kept the A’s off the scoreboard for the next three. An RBI single by McDowell in the sixth and a solo home run by Rodríguez gave Texas an 8-6 lead going into the top of the ninth. Cris Carpenter relieved Jay Howell, who had tossed two scoreless innings. Carpenter entered the game with a 3.03 ERA and was vying for his sixth save. Mike Aldrete batted for Paquette to lead off the top of the ninth. (Aldrete was 2-for-17 as a pinch-hitter, but those two hits were home runs.) He singled to center field, and Henderson poked a grounder between first and second into right field, giving Oakland two baserunners with no outs. After Javier flied out to center, Carpenter gave up singles to Berroa and Ruben Sierra, scoring Aldrete and Henderson and tying the game, 8-8. Tom Henke replaced Carpenter and faced Steinbach, who was already 2-for-4 with a double and an RBI. On a 3-and-1 count, Henke grooved a fastball that Steinbach slashed the other way to deep right field just out of the reach of a leaping Greer. It barely cleared the wall, giving the A’s an 11-8 lead.

The Rangers mounted a comeback in the bottom of the ninth off Oakland reliever John Briscoe. After he walked Greer with one out, Jose Canseco hit a fly ball that drifted to the warning track but was caught by Sierra for the second out. Will Clark homered, though, and Texas was within one run. But Carlos Reyes, in relief of Briscoe, got González on a game-ending popup to shortstop.

Two months later the 1994 season came to a screeching halt thanks to the players strike. The Rangers finished in first place in the American League West in spite of a 52-62 record. They were the beneficiaries of the new three-division realignment that baseball owners by a 27-to-1 vote had okayed before the season. The lone no vote had come from Rangers managing general partner George W. Bush. “I represent the silent voices of baseball purists,” said the future president. “History will prove I was right.”3

In addition to the sources cited in the Notes, the author consulted Baseball-Reference.com, Retrosheet.org, and “June 17, 1994,” ESPN 30 For 30, directed by Brett Morgen.