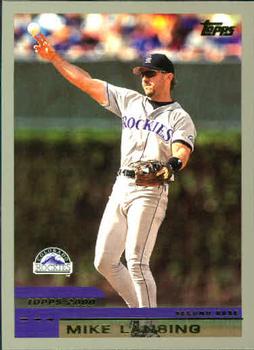 Mike Lansing placed himself in the record books before his Colorado Rockies had finished the fourth inning in a 19-2 romp over the Arizona Diamondbacks. Arizona was ahead of Colorado in the National League West standings, but the Rockies had trounced the D-backs the day before, 14-5, to close the lead to one game. The next day, in front of a Father’s Day crowd of 48,117 at Coors Field, Lansing drove in five runs, all before the game was even official. Jeff Henderson of theDenver Post wrote to describe the Rockies rolling over the Diamondbacks: “For the second straight day in front of the second straight capacity crowd, they bludgeoned the Diamondbacks into blood and scales.”1

Masato Yoshii toed the rubber for the Rockies. His recent starts had been somewhat rocky, and he had six losses and four no-decisions with a 5.74 ERA to show for them. He had also been tagged for 10 home runs in those nine games. The Diamondbacks sent Armando Reynoso to the hill to face Colorado, with a record of 4-5 and a 5.12 ERA.

Yoshii retired the first three of the first four Arizona batters on fly balls. In the bottom of the first Tom Goodwin led off with a single to center. Lansing followed by driving a 1-and-2 pitch into deep right for a run-scoring triple. Larry Walker followed with an RBI groundout to short, and the Rockies had a 2-0 lead.

True to his recent form, Yoshii allowed a home run (although a solo shot) to Greg Colbrunn in the second. In the bottom half, the Rockies continued the offensive. Brent Mayne singled and moved to third when Neifi Perez doubled to right. Reynoso retired Yoshii and Goodwin, but Goodwin’s groundout brought Mayne home. Lansing then picked on an 0-and-1 pitch and sent it over the wall for a two-run homer, increasing the Rockies’ lead to 5-1.

Every Rockies position player had a hit by the third inning, in which Colorado scored nine times, increasing its lead to 14-1.2 Jeff Cirillo, Todd Helton, and Jeffrey Hammonds all singled. Mayne doubled to right, and with three runs in, Arizona skipper Buck Showalter made a call to the bullpen, bringing in left-hander Omar Daal. The Rockies had chased Reynoso before he could retire a batter in the inning. The hit parade continued, as Perez singled, driving in Mayne. Yoshii forced Perez at second but reached on a subsequent throwing error by shortstop Tony Womack. Goodwin walked, bringing Lansing to the plate. He hit a line drive to short left field for a double, driving in the two runners on base. Walker singled and Cirillo homered. Daal managed to retire Helton and Hammonds, but Colorado had batted 12 men, getting their nine runs on eight hits and a walk, and leaving none on base.

Mayne started the Colorado fourth with a home run. Yoshii helped his own cause with a one-out double to left field, and he scored when Goodwin singled. Showalter pulled a double switch: Craig Counsell came on to play third (batting ninth) and Russ Springer became the third Arizona pitcher of the game (batting fourth). The toughest part of the day for Lansing was getting a single. He told reporters, “Everyone knew what was going on. I hit it in a good spot,”3 sending the ball down the right-field line. He had hit for the cycle, and the Rockies had made only 10 outs in the game! An out later, Cirillo drove an RBI single to right, putting the Rockies up 17-1.

Yoshii stumbled slightly in the top of the fifth, giving up a double to Colbrunn and a single to Kelly Stinnett. But Counsell hit into a double play, and all Arizona could muster was its second and final run of the game.

Lansing had one more at-bat, in the sixth inning. With Dan Plesac now on the mound and Goodwin on base after a leadoff single, Lansing struck out swinging on three pitches. Goodwin advanced on a wild pitch by Plesac and scored when Cirillo notched another single, his fifth straight hit of the game. Darren Bragg pinch-hit for Lansing in the eighth inning and struck out, right before Terry Shumpert hit a solo homer. The Rockies had managed only three hits after the fifth inning, but they cruised to a 19-2 victory. Mike Myers relieved Yoshii and pitched the eighth inning, allowing only a walk, and Jose Jimenez closed out the ninth, retiring the side with just a single to Colbrunn, the only Diamondbacks player who made a difference on offense.

Cirillo drove in four runs and ended the game with a 5-for-6 performance. He said, “It’s great for the fans, great for the organization, great for the players. Hopefully we’ll keep it going.”4 Lansing, Cirillo, and Mayne each had four hits by the fifth inning. Mayne ended the game a triple shy of the cycle. “We really couldn’t do anything wrong,”5 Rockies manager Buddy Bell said after the game. From the Denver Post: “The beatings in ‘Gladiator’ weren’t this gory.”6

The Rockies pounded out 23 hits, 10 for extra bases. Yoshii earned the win, which raised the Rockies’ home record to 25-8 and put them into a tie for first place in the National League West Division with the Diamondbacks. They moved to 10 games above .500 for the first time since the 1997 season. Colorado finished the month of June winning 6 of 11 games. Then, after beating San Diego two out of three times to start July, the Rockies slid into an 11-game losing streak, dropping to fourth place, and they never recovered.

Meanwhile, the Diamondbacks had lost 13 of 17 road games, culminating with this embarrassing series. Showalter gave his take on the past two games, saying, “There is not a whole lot you can get over-analytical about the way they are playing. We haven’t been swinging the bats as we did earlier in the year and certainly not producing the runs that you need to combat 19.”7

With his performance, Lansing made history. “I never had a cycle, never at any level,” he told reporters, adding, “It’s particularly satisfying to have a big game when we needed it.”8 His line was 4-for-5 with 3 runs and 5 RBIs. On the previous day, Lansing had gone 3-for-5 with a single, double, and home run (a triple shy of the cycle). In the two games against the Diamondbacks, his batting average jumped from .267 to .285, and his slugging percentage gained 53 points. This was the fourth cycle in the Rockies’ history, occurring almost exactly one year after one by Todd Helton (June 19, 1999). The other two were by Dante Bichette (June 10, 1998) and Neifi Perez (July 25, 1998).

In addition to owning the quickest-ever cycle, Lansing shares the record for the most home runs in an inning, with two (he hit a two-run and a three-run homer in a game on May 7, 1997, when the Montreal Expos bested the San Francisco Giants, 19-3).9

Despite his achievement on June 18, Lansing was traded five weeks later, on July 27, to the Boston Red Sox. He had batted .258 in 90 games with Colorado (with 14 doubles, 6 triples, and 11 home runs). In 49 games with Boston in 2000, his average was only .194, with four doubles and no triples or home runs. His slugging percentage dropped from .419 in the National League to .223 in the American League.

2 Every starting position player had hit safely in the previous game as well. Lansing, Cirillo, and Helton each had three hits in the 17-hit attack. Both Lansing and Helton needed only a triple to complete the cycle.