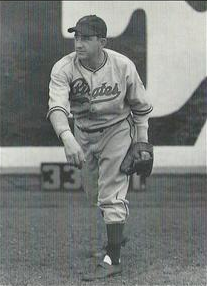 The Cincinnati Reds edged the defending world champion St. Louis Cardinals, 1-0, as “Al Unser opened the exits for the 6,324 cash customers with a run producing single”2 in the bottom of the 13th inning of a night contest at Crosley Field.

St. Louis brought its 29-23 record, good enough for third place in the National League, to the ballpark to take on Cincy with a 22-27 mark. The Reds were solidly in seventh place. While the Cardinals stayed in the pennant chase until the last week of the season, the Reds spent the rest of the season out of the race, finishing next to last in the senior circuit.

Joe Bowman got the nod for Cincinnati. Pitching two days after his 35th birthday, the right-hander was in the final season of his major-league career.3 He had been claimed on waivers by the Reds from the Boston Red Sox in late May. In three starts with the Red Sox, Bowman was 0-2 with a 9.26 ERA. Since coming to Cincinnati, he had already thrown three complete games in three starts, earning victories in each, including a 2-1 win over these Cardinals on June 13. For the visitors, right-hander Red Barrett, who had begun his major-league career with the Reds (12 games in 1937-40), toed the rubber. In May he was also pitching for Boston (but in the National League). The Braves sold Barrett to St. Louis on May 23. In five starts for the Boston Braves, he was 2-3 with a 4.74 ERA, but with the Cardinals he was already 4-2 with a 2.68 mark. On June 11, Barrett pitched a complete-game 5-0 shutout over the Reds at St. Louis’s Sportsman’s Park, then on the 15th he lost to the Pirates, 5-2, at Pittsburgh.

The St. Louis Post-Dispatch described the game as “a whale of a mound duel,”4 as the two right-handers were dominant from the start. Bowman retired the Cardinals in order to begin the game. Woody Williams singled with one out in the bottom of the first, but his Cincinnati teammates could not capitalize. Whitey Kurowski had the first St. Louis hit to lead off the second, but Bowman retired the next three hitters. Red Schoendienst had an infield single in the third for St. Louis, but he was caught stealing to end the inning.

At one point, Bowman retired nine in a row until Schoendient doubled with two outs in the sixth. Johnny Hopp drew a walk, and suddenly, with two runners on, St. Louis had its best chance of the game. Bowman induced Buster Adams to ground out to second baseman Williams, and the game remained scoreless. Emil Verban singled to lead off the top of the eighth for St. Louis, but Bowman again shut down the Cardinals.

Through the first nine innings, Barrett was pitching one of the best games of the season. After allowing the single to Williams in the first inning, Barrett was perfect for the next 8⅔ innings, retiring 26 straight Reds, walking none, and recording one strikeout. At the end of nine innings the game was scoreless. Both pitchers remained in the game.

The Cardinals put a rally together in the 10th. Ray Sanders led off by beating out a slow roller to third, fielded by the pitcher, and Sanders advanced to second on a sacrifice bunt by Ken O’Dea. After Verban flied out to right (and Sanders did not tag), Bowman intentionally walked Marty Marion to face his counterpart Barrett. Barrett singled off Bowman’s leg, loading the bases for Schoendienst. But the rookie popped out to short to end the threat.

Williams opened the first extra frame for Cincinnati with a double over the shortstop into left-center. Cincinnati skipper Bill McKechnie called for Gee Walker to sacrifice, but Barrett fielded the bunt, held Williams at second, and threw Walker out at first. Frank McCormick was “purposefully passed,”5 but Barrett pitched out of the jam.

St. Louis put two runners aboard in the 12th, on a single by Sanders and a walk to Marion (his second intentional walk in extra innings), but the Cardinals could not score. 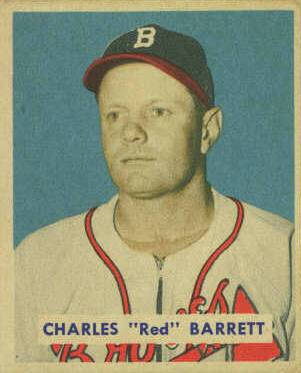 In the bottom of the 13th inning, though, Barrett “suddenly lost his stuff,”6 allowing a walk and two hits. With one out, Al Libke drew a free pass. Steve Mesner laid a “neatly executed safe bunt”7 down the third-base line and reached base, advancing Libke to second. Unser then stroked a single to center, plating Libke, and the Reds claimed the win. Barrett had allowed only four hits in 13 innings of work (two of them to Woody Williams), but that was all Cincinnati needed. Bowman gave up eight safeties, seven singles and a double.

St. Louis was led by rookie Red Schoendienst. He became the Cardinals’ leadoff hitter on May 27 and batted either first or second for almost all of the remainder of the 1945 campaign. He had a 2-for-6 evening against Bowman, driving St. Louis’s only extra-base hit of the game, with his double in the sixth. Ray Sanders also collected two hits, in five at-bats, both after the ninth inning. However, St. Louis could not muster a run.

This was the fifth extra-inning game of the season for Cincinnati, and the Reds had won them all, including a 9-7 victory over St. Louis in 10 innings on April 22. For the Cardinals, it was their seventh extra-inning contest, and their record in these games was 2-5.8 Bowman’s performance gave Cincinnati its seventh shutout victory of the season and its second 1-0 win over St. Louis.

From June 7 until June 24, the Reds played 15 games but won only four of them, all complete-game victories by Bowman. Joe finished the season for Cincinnati with a record of 11-13, losing 11 of his last 14 decisions, and was released the next spring. But on this night, he proved his worth in what the Cincinnati Enquirer dubbed the “titanic hill duel.”9

3 Cincinnati released Bowman on March 29, 1946, and he was not signed by another major-league club, playing and coaching instead for various minor-league teams.