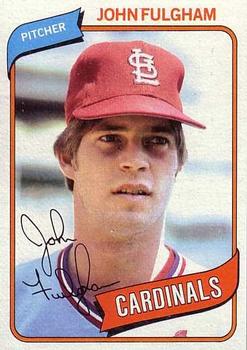 Born and raised in the northern St. Louis suburb of Maryland Heights, Missouri, John Fulgham grew up a Cardinals fan who imagined playing for his hometown team.1 His fantasy became reality on June 19, 1979, when Fulgham made his major-league debut with the Cardinals against the San Diego Padres.

It wasn’t merely a postscript appearance for the 23-year-old right-handed pitcher. He started and registered a complete game as the Cardinals topped the Padres 7-2. The victory snapped a six-game losing streak for St. Louis on its West Coast trip and a 13-game skid at San Diego Stadium dating back to July 17, 1976.

Fulgham, summoned from the Cardinals’ Triple-A farm club in Springfield, Illinois, four days earlier when left-hander Bob Sykes was placed on the disabled list, allowed eight hits and one walk with six strikeouts. Not even Fulgham could have envisioned such an astonishing performance out of the gate.

“Really, what I fantasized was going out and pitching five, six strong innings and hopefully picking up a win,” said Fulgham, whose wife, Marianne, was among the crowd of 20,216 in attendance.2

San Diego scored both of its runs in the first inning at no fault of Fulgham. Second baseman Ken Oberkfell and third baseman Ken Reitz committed errors and center fielder Tony Scott lost a fly ball in the twilight that fell for a hit. With the bases loaded and two outs, Jay Johnstone singled in Dan Briggs and Paul Dade with a pair of unearned runs.

“He probably thought we were pretty awful,” Reitz said. “We screwed up his shutout real quick.”3

Fulgham, who impressed the St. Louis brass in spring training and went 6-3 with a 3.16 ERA in 11 starts at Springfield, exhibited a mindset mature beyond his years.

“You don’t let one inning bother you in any baseball game,” said Fulgham, who admired future Hall of Fame pitcher Bob Gibson as a youngster.4 “You just have to buckle down and try to take the bull by the horns and do it yourself until your team can come back. I just wanted to keep controlling the game as much as possible. I can’t let my emotions get carried away.”5

The Padres threatened Fulgham only twice the rest of the way. Dade and Dave Winfield singled with one out in the third, but Fulgham struck out Jerry Turner and got Gene Tenace to ground into a fielder’s choice. After singles by Tenace and Fernando Gonzalez put runners at first and third with two outs in the sixth, Fulgham retired Ozzie Smith on a popout.

“He seemed to know what he wanted to do,” Cardinals catcher Ted Simmons said of his 6-foot-2, 205-pound batterymate. “He’s got a lot of poise. Nice fastball. Good changeup, nice slider, he throws strikes. It was nice.”6

Fulgham finished the 2-hour, 29-minute affair with a flourish, setting down nine of the final 11 batters he faced, including three of the last four on strikeouts. The only Padre Fulgham could not figure out how to retire was Dade, who went 4-for-4, including San Diego’s only extra-base hit — a double in the fifth.

“I wanted to establish my fastball so the second time around the league won’t be so hazardous,” said Fulgham, selected by the Cardinals with the 15th pick in the secondary phase of the 1976 amateur draft. “If you go out and establish your breaking ball, they’re going to hit your fastball all over.”7

Fulgham took advantage of the expansive ballpark with 13 fly outs. Scott alone had 10 putouts, two shy of the major league record for a center fielder in a nine-inning game at the time — shared by Earl Clark of the Boston Braves (1929) and Lyman Bostock of the Minnesota Twins (1977). Scott made an outstanding diving catch on a ball hit by Gene Richards in the fifth.8

Opposing Fulgham was Eric Rasmussen, a right-hander acquired from the Cardinals on May 26, 1978, in exchange for outfielder George Hendrick. Rasmussen (3-6), who had won three of his previous five decisions, was making his third appearance against his former teammates. He pitched a complete game to beat St. Louis, 3-2, on July 18, 1978, but was knocked out after just two-thirds of an inning on June 9, 1979, after Keith Hernandez hit a line-drive single off his forearm.9 This time around, the Cardinals jumped on Rasmussen with three quick runs in the second inning. Hendrick led off with a double and scored on a single by Scott; Reitz doubled to drive in Scott; and Reitz scored when Smith’s relay throw to third went into the visitors dugout. Just like that, a 2-0 deficit turned into a 3-2 lead.

St. Louis made it 5-2 in the third. Hernandez tripled leading off and scored on a passed ball with Simmons batting. Simmons walked, and Padres manager Roger Craig replaced Rasmussen with Bob Owchinko. Hendrick singled and advanced to second when Simmons was thrown out at third on a throw by Johnstone from center field. Another RBI single by Scott scored Hendrick.

In the seventh, Fulgham and Garry Templeton drew one-out walks against Mickey Lolich. After Lou Brock flied out, Hernandez walked to load the bases. Simmons singled to drive in Fulgham and Templeton and round out the scoring.

Hendrick, Scott and Reitz each had two of the Cardinals’ 10 hits. Fulgham demonstrated a deft ability to handle the bat, recording two sacrifices.

Despite their road-trip struggles, the Cardinals (33-27-1) were in second place in the National League East Division, three games behind the Montreal Expos. (The previous season the Cardinals had lost 93 games.) St. Louis went on to finish third with an 86-76 record — 12 games behind the eventual World Series champion Pittsburgh Pirates.

Fulgham played a significant role in the reversal of fortune. He went 10-6 with a 2.53 ERA, completing 10 of 19 starts, including two shutouts and two other games in which the only run he allowed was unearned. His 10 wins were tied for the second most among NL rookies (with David Palmer of the Expos), behind Rookie of the Year Rick Sutcliffe’s 17 with the Los Angeles Dodgers. In 146 innings Fulgham gave up 123 hits and 26 walks (for a nifty 1.02 WHIP) while recording 75 strikeouts. Opponents batted merely .227 against him. From August 17 to September 3, he tossed four consecutive complete-game victories with a microscopic 1.25 ERA (five earned runs in 36 innings).

In 1980 Fulgham posted a 4-6 record with a 3.38 ERA in 15 games before being sidelined with a sore shoulder that ultimately was diagnosed as a torn rotator cuff. He underwent surgery the following spring and did not pitch that season. After attempting comebacks in the minor leagues in 1982 and 1983, Fulgham retired. All 14 of his big-league wins were complete games.