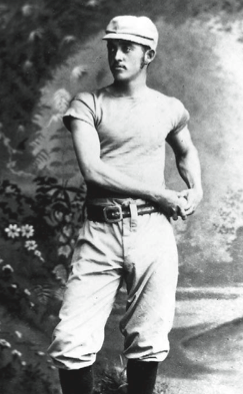 When the National Association’s last place Worcester club sent a collegian out to pitch against the National League leading Chicago White Stockings in an exhibition game, it sounded like a mismatch. The result bore out that presumption … but it was the Chicagoans who were over-matched.

Lee Richmond, a 22-year-old left-hander from the Brown University team, not only shut out Cap Anson’s proud White Stockings, 11–0, that afternoon in Worcester, he did so without allowing a hit. That makes Richmond’s debut arguably the most remarkable by any pitcher against a big-league team.

The exhibition—common in those days as teams on long road trips tried to generate revenue during off days on their league schedule—was played at the Worcester Agricultural Fairgrounds, also known as Driving Park, the home field of the Worcester nine. About 500 spectators attended, most doubtless drawn by the chance to see such stars of the only major league then in existence as Anson, Abner Dalrymple, George Gore, and Ned Williamson.[fn]Worcester Evening Gazette, June 3, 1879.[/fn]

At the time of the game, Chicago stood 14–1 and led the National League by four games over Providence. The White Stockings had won eight consecutive league games with the last six coming against Boston. Worcester, just 5–13, was in last place in the nine-team National Association, then a minor league.

In an effort to invigorate his club, Worcester manager Frank Bancroft brought in three new players for their first professional game and “materially reinforced his nine.”[fn]Providence Daily Journal, June 3, 1879.[/fn] Richmond was the star left-hander of the Brown University nine. Also making their debuts that day were Richmond’s catcher at Brown, W. H. Winslow, and infielder Arthur Irwin.

Initially, Richmond had no interest in challenging the National League leaders. Walter F. Angell, Richmond’s classmate and lifelong friend, later wrote that Richmond had received several telegrams from Bancroft asking Richmond to pitch, one of which Angell saw Richmond open. “He handed it to me with the comment that of course he could not go; but his college catcher Winslow came along and persuaded him to take chances and change his mind, Winslow agreeing to go with him and play as catcher.” Angell recorded.[fn]Walter Angell, letter to editor of the Boston Post, August 18, 1925.[/fn] Those “chances” involved the cutting of classes and recitations to make the Worcester trip. Richmond and Winslow were each paid $10 and expenses for the game. According to the New York Tribune it was the need for a pair of pants that induced Richmond to turn professional. Because “Winslow figured that he would need a new pair of trousers and the $10 would help foot the bill, he induced his battery mate to go for friendship’s sake.”[fn]“Richmond’s Debut In Professional Baseball,” Brown Alumni Monthly, 1910-1911, from the New York Tribune.[/fn]

Despite never having appeared in anything more than a college game, Richmond dominated the afternoon. He walked lead-off batter Dalrymple and then retired the next 21 Chicago batters in order in the game, which was shortened to seven innings due to rain. Richmond struck out eight and did not allow a ball to be hit out of the infield.[fn]Chicago Tribune, June 3, 1879.[/fn] All of Richmond’s strikeouts came against Chicago’s four lefthanded batters, Dalrymple (1), Gore (3), Orator Shafer (3), and Bill Harbridge (1).

The Worcester offense garnered 12 hits, good for 20 bases, off Chicago pitcher Frank Hankinson. Steve Brady hit the game’s first pitch for a triple and was promptly driven in by  Lon Knight’s single.[fn]Worcester Evening Gazette, June 3, 1979.[/fn] No one knew it at this stage but that was all the runs the Worcesters would need. They went on to score a total of three in the top of the first inning. Worcester had three singles, two doubles, and a triple as they batted around in the fifth to score four times and ice the game. The final score was 11–0. Brady had four hits on the day.

Richmond’s success was primarily due to his skill. But he also had a couple of other advantages. The first was the Chicago batters’ unfamiliarity with him. It also helped that he was left-handed, for the NL featured only one left-handed pitcher at the time, Bobby Mitchell, and he pitched infrequently. Chicago’s four left-handed hitters found making contact with Richmond’s deliveries especially difficult. Further, Richmond had pitches that were unusual. He utilized a “peculiar set of curves that he had evolved. Instead of throwing curves that broke in and out his ball broke upward or downward. His jump ball was one of the biggest successes of the period, while his tantalizing drop greatly resembled the far-famed ‘fade-away’ employed by Christy Mathewson of the Giants.”[fn]“Richmond’s Debut In Professional Baseball,” Brown Alumni Monthly, 1910-1911, from the New York Tribune.[/fn]

The Chicagos and Worcesters met in another exhibition game later that same season, on September 18. The result was much the same with Richmond shutting out the Chicagos 7–0 in an eight-inning game. The Chicagos held the lead in the pennant race until August 14 and then fell all the way to fourth place, 10½ games behind the league champion Providence Grays. Richmond proved to be a “franchise player” for the Worcesters in leading them to a 19–23 record and solid fourth-place finish in the National Association. He had another no-hitter later in the year, won his major league debut, and totaled 47 wins (amateur and professional) for the season. The outstanding play of the Worcesters following the acquisition of Richmond propelled the city into the National League in 1880. 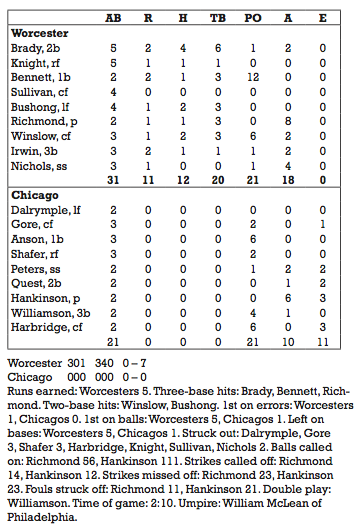