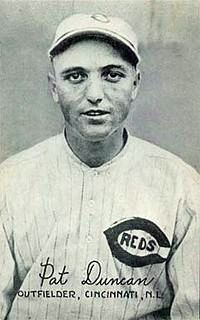 Jack Ryder was the beat writer who covered the Cincinnati Reds for the Cincinnati Enquirer. In his game notes for the June 2, 1921, game between the Reds and the visiting St. Louis Cardinals, Ryder estimated that about 1,600 fans turned out for the afternoon affair. By the time the game ended, thousands more would undoubtedly claim that they were there. And from these “eyewitness” accounts many yarns would be spun about the historic event. Many would declare, “I saw it. I was right there.”

Perhaps the reason for the cobweb infestation on the turnstiles was that the Reds were battling the Philadelphia Phillies for the bottom of the league. Cincinnati was only two years removed from winning the 1919 World Series. Although they had a grand team, some may charge that the world championship was “gift-wrapped” to the Reds. They did not earn it, in light of the Black Sox Scandal. Still, in 1920 the Reds were competitive, finishing in third place.

Their opponent on June 2 was the St. Louis Cardinals, who were led by manager Branch Rickey. The groundwork Rickey laid in St. Louis would be the foundation for one of the great clubs for years to follow. The Cardinals would take a firm grasp of the National League by the end of the decade. But until that time came, they were a middle-of-the-pack team.

The pitching matchup for the 3:00 P.M. game pitted Marvin Goodwin for the visitors and Clint Rogge for the Reds. Goodwin had his best year in the majors in 1919, posting an 11-9 record for St. Louis. But for the most part he was used as a spot starter and reliever. Rogge had been twirling for years with Indianapolis of the Double-A American Association. He was mostly a .500 pitcher who was getting a look from Reds manager Pat Moran.

The game certainly got off to a great start for the Reds. In the home half of the first inning, Sam Bohne tripled to left field. He scored when the next batter, Jake Daubert, grounded out to first base. The lead was short-lived, however. Rogge walked Rogers Hornsby to lead off the second inning. A double by Joe Schultz sent him to third and Austin McHenry flied out to left field to push Rajah across the plate. It turned out that the base on balls was the bugaboo for Rogge. Of the four walks he surrendered, two led off an inning in which the Cardinals scored.

The Reds countered with three runs in the bottom of the second. Rogge contributed with a triple to center to cap the scoring. Goodwin was lifted from the game by Rickey, who called on Ferdie Schupp. The move stopped the bleeding as Schupp got the last two outs of the inning. Although he was used as both a starter and spot reliever in his career, Schupp had made 32 starts for the Giants in 1917. He responded with a team-leading 21 victories for the pennant winners, and was credited with a win in the World Series.

St. Louis battled back, adding single tallies in the fourth and fifth innings. Doubles by Hornsby and Doc Lavan were the big blows in the fourth while the run in the fifth was unearned.

With Cincinnati holding a scant one-run lead at 4-3, the bottom of the fifth inning was what Reds fans would be talking about for a long time. Once again Rogge got on base via a walk. Bohne followed with a single to left field and then Daubert moved the runners up a base with a sacrifice bunt. Edd Roush followed with a fly to center field to score Rogge.

Up to the plate stepped Pat Duncan. The Reds left fielder had broken into the majors with Pittsburgh in 1915, but was returned to the minors after playing in only three games. Duncan caught on with Birmingham of the Southern Association in 1917. He was purchased by the Reds in 1919 and played in 31 games for the pennant winners. In the World Series Duncan hit .269 and led the team with eight RBIs. His best season in the majors was in 1922, when he hit eight homers and had 94 RBIs, both career highs. Duncan was a fine hitter, batting .307 in his career.

With Bohne on base, Duncan put a drive into a pitch from Schupp and cleared the left-field wall over the Devere Electric Company sign, which was about 75 feet to the right of the foul line. The left-field wall stood about 12 feet high. Duncan’s shot cleared it by five feet and bounded across York Street, outside the wall. It was the first time a fair ball had cleared any fence in a National League game in Redland Field. On May 22, less than two weeks earlier, John Beckwith of the Chicago Giants drove one out of the park in a Negro National League game against the Cincinnati Cuban Stars.

The home run chased Schupp and Lou North came in to slam the door for St. Louis. But the blast essentially sealed the win for the Reds. The next two frames were scoreless, and the Cardinals scored two runs in the top of the eighth. Rogge’s day was complete; he was charged with both runs. Hod Eller, who was playing in his final year, came in to finish the game, pitching the final inning and two-thirds.

Cincinnati tagged on one more run in the bottom of the eight to make the final score 8-5. St. Louis left 10 men on base and could not get the big hit when it was needed most. The five-game series, which St. Louis won three games to two, produced 62 runs and 117 hits for a total of 165 bases. The Cardinals finished in third place, seven games behind the champion New York Giants. The Reds finished in sixth place, ahead of Chicago and Philadelphia, and 24 games off the pace.

The ball that Duncan smashed over the wall hit one of Cincinnati’s finest. The ball struck Patrolman Louis Gellenbeck in the leg. Gellenbeck planned to have the ball signed by Pat Duncan and Pat Moran the next day at Redland Field.