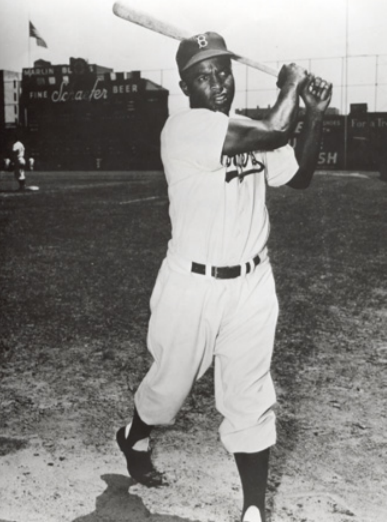 On June 1, 1954, Brooklyn shut out the Braves, 2-0, in the first game of a crucial three-game series at Milwaukee. It was the third straight loss for the Braves, and afterward skipper Charlie Grimm devised a platoon system for the next game and beyond, saying, “I gotta do something to get some hitting.”1 The first-place Braves, with a record of 23-17, clung to a 4-percentage-point lead over the Dodgers.

About 20 minutes after the first pitch on the night of June 2, the rain started falling. The paid attendance was 37,044 despite the dreary forecast of chilly and wet weather. Workhorse Lew Burdette started for Milwaukee, entering the contest with a 5-3 record and an ERA of 2.25.

The Dodgers struck quickly as Pee Wee Reese’s RBI single in the top of the first made it 1-0. A struggling Don Newcombe (3-3 with a 4.85 ERA) took the mound for the Dodgers. Newcombe faced only 11 hitters, walking three, allowing two hits, and hitting Burdette with a pitch. Reliever Bob Milliken came in with two outs in the second inning and worked out of a bases-loaded jam although the Braves scored one run to tie it, 1-1.

The rain kept falling, and Brooklyn took a 2-1 lead in the top of the third on a bases-loaded walk to Carl Furillo issued by Burdette, who typically was a good control pitcher. At the end of the half-inning, the umpires suspended action. The delay lasted 91 minutes and about half the fans were in the stands when play resumed. It was still raining.

The rain picked up in the fourth frame. Milwaukee scored five runs off Milliken in bottom of the inning to take a 6-2 lead. During the rally, Milliken hit Burdette with a pitch, Lew’s second HBP in as many plate appearances. Later, with men at first and second and Johnny Logan at the plate, umpire Lee Ballanfant lost track of the count. According to the Allan Roth, who tracked each pitch as official statistician for the Dodgers, Milliken’s first pitch to Logan was a called strike and Logan fouled off the second pitch. After a ball was called, Logan fouled off another pitch. After another ball was called, Logan hit another foul ball. Then Ballanfant called another ball. Logan walked away from the plate, thinking it was a strike. After he stepped back into the batter’s box, Ballanfant ordered Logan to take first base for the three-ball walk. Logan seemed surprised.

The Dodgers protested and rushed Ballanfant. Others threw towels from the dugout. Ballanfant chased all but three Dodgers. Manager Walt Alston was allowed to recall players from the clubhouse as needed. Eddie Mathews then clouted a grand slam to cap the big inning.

There was more freakish comedy in the fifth. The rain did not let up. When Jackie Robinson came up to lead off, he argued with Ballanfant about the walk to Logan. Robinson was tossed and, as he returned to the dugout, he flipped his bat. It skidded off the top of the dugout and bounced into a box, striking an usher and a fan. Robinson immediately walked over to the stands and apologized to the fan, Peter Wolinsky, who was holding his head. Several fans rushed to the scene and some jumped on top of the dugout. Police officers quickly cleared the dugout roof. Robinson was roundly jeered as he exited, and Wolinsky kept the bat as a souvenir. Play resumed, even as white towels continued to fly out of the Brooklyn dugout.

Dick Williams pinch-hit for Robinson and briefly continued the argument with Ballanfant, but finally got in the batter’s box. Williams lifted a foul popup, which was misjudged by Charley White, one of the catchers in Grimm’s new platoon. Getting a second chance, Williams hit a fly ball to rookie left fielder Hank Aaron, who dropped it as Williams scampered into second base. Later in the inning, Furillo bounced a grounder to second sacker Jack Dittmer, who was starting for the first time in two weeks in place of the slumping Danny O’Connell. Dittmer booted the ball and a run scored.

Two hitters later, Wayne Belardi pinch-hit for Milliken. Belardi had two strikes on him when he hit a foul tip. White failed to snare the ball and it lodged under his mask. With Belardi getting new life, Burdette walked him to force in a run and cut the lead to 6-4. It was Burdette’s second bases-loaded walk of the night, and Grimm summoned reliever Dave Jolly. After a run-scoring groundout by Junior Gilliam, Pee Wee Reese put the Dodgers in front, 7-6, with a two-run double to right field. All five runs were unearned.

Milwaukee had the tying run on second base with two outs in the bottom of the fifth when reliever Ben Wade retired pinch-hitter Catfish Metkovich on a fly ball.

As the rain poured down, the umpires signaled for another delay. After 35 minutes of a continuous soaking, they called the game at 12:20 A.M. on Thursday, June 3. It took 2 hours and 24 minutes to complete the five-inning game, and the two delays totaled a combined 2:06. A few hearty fans were still on hand when the ludicrous exhibition came to an end. The Dodgers were in first place by one game.

Robinson addressed the bat-throwing incident with reporters. He said, “All I did was tell Ballanfant he was wrong on the count. He told me to get in and hit or he’d throw me out — and he did! Then I tossed the bat underhanded towards the dugout, but I held onto it too long. I went over and apologized which was about all I could do. After all, I wouldn’t throw a bat into the grandstand.”2

Ten policemen escorted the Dodgers to their bus in the early-morning rain, apparently fearing an outbreak of trouble from bitter Braves fans who lingered near the ballpark. There were no incidents. Grimm sulked and grumbled in the Braves clubhouse. “Everything happened to us,” he moaned as he left for home.3

Milwaukee Journal sports editor R.G. Lynch wrote a scathing column in the next day’s paper, as described in this excerpt:

Were You at the ‘Ball Game’? Hello, Sucker!

“Somebody should be arrested for obtaining money under false pretenses as a result of that performance at the Stadium Wednesday night. The umpires saved the ball club about $50,000 by letting the farce continue for the necessary five innings, but if that was baseball we’ll eat Lou Perini’s Borsalino fried in axle grease! Continuing play in a drizzle is one thing, but this was no drizzle. The fourth inning was completed in a downpour. Although it seemed obvious that an all-night rain had set in, the customers were made to wait an hour and one-half (or lose their money by going home) and then all they got was one more inning of play in a hard rain with a ball which was too slippery for pitchers or players to handle well.”4

The rain continued on Thursday morning and the Braves postponed the third game of the series. Later in the day, Robinson was notified that Mr. and Mrs. Wolinsky had retained an attorney. A few days later, National League president Warren Giles levied a $50 fine against Robinson.

Florence Wolinsky claimed that the bat thrown by Robinson struck her husband in the forehead and hit her above the left eye. She said, “I was stunned and shocked. I didn’t know what hit me.”5 The attorney was James Stern, a family friend who happened to be sitting behind the Wolinskys at the game. Early on, the couple was undecided about a possible damage suit and claimed that they had no interest in money. But on May 10, 1955, Stern filed a $40,000 lawsuit against Robinson and the Brooklyn Dodgers. Mrs. Wolinsky sought $25,000 and her husband asked for $15,000.

A federal judge dismissed the suit on February 4, 1957, after learning that the principals had settled out of court. Nearly three years after the bat-throwing incident, Peter Wolinsky and his wife settled for $300 each, and their attorney stated that they were pleased with the settlement amounts.