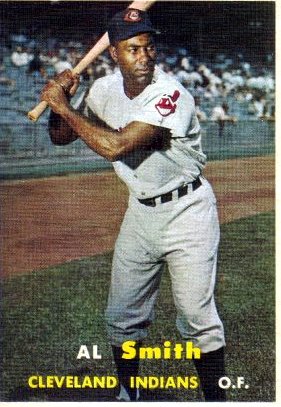 The New York Yankees were five-time World Series champions heading into the 1954 season. Nobody would argue, not even Yankees manager Casey Stengel, that New York had the firepower to keep hanging championship banners from the rafters at Yankee Stadium. What was the last team to win a pennant in the American League before the Yankees’ streak? The Cleveland Indians won their second title in 1948. From 1951 to 1953 Cleveland finished in second place to New York.

Cleveland was 3-2 against New York thus far in the season, as the team headed to the Bronx for a three-game series. Although, there were still plenty of games to be played, it was not going far out on a limb to say this was an important series for both clubs. Victories would be at a premium, and the Yankees and Indians had 17 more games to play head-to-head.

A crowd of 43,326 walked through the turnstiles at Yankee Stadium for the Wednesday evening affair. If they showed up late, they missed quite a show by the Yankees hitters in the first inning.

Reynolds set down the Indians in order in the first inning. In the bottom of the frame, the Yankees proved to be nasty hosts to their guests. Hank Bauer, Phil Rizzuto, Mickey Mantle, and Eddie Robinson got the party started with consecutive singles that plated two runs. Cleveland manager Al Lopez wasted little time going to his bullpen, summoning left-hander Don Mossi to replace Wynn.

With runners on first and third, Mossi faced Enos Slaughter and recorded the first out on a popup to shortstop. Gil McDougald followed with a squeeze-play bunt toward first base. Mossi grabbed the ball and tossed it to catcher Jim Hegan to get Mantle coming home. But Mantle did not slide into the plate as Hegan anticipated; instead he stepped around the Indians backstop and Hegan missed the tag. Andy Carey followed and walked to load the bases. Charlie Silvera was up next, and bounced a comebacker to Mossi. The pitcher fumbled the ball long enough for Robinson to score and Silvera was credited with an RBI.

The Yankees were ahead 5-0, and they were not done. Reynolds grounded out to second to score another run. Bauer came up again and hit a single to knock in Carey. Bauer attempted to take second base but was thrown out by center fielder Larry Doby for the third out.

The Yankees scored all of their runs via a single, a walk, or a sacrifice. Perhaps it was not the exact offensive attack the fans were accustomed to seeing, but a seven-run lead looked mighty healthy with Reynolds on the hill.

The Indians started to claw back in the top of the third inning when, with two outs, Al Smith walked, Bobby Avila singled, and Doby smacked a tremendous blast to right-center for his fifth home run of the season, making the score 7-3.

They inched closer in the top of the fourth inning. Dave Philley led off with a single. Reynolds walked Rudy Regalado and George Strickland to load the bases. Hegan reached on an infield single to score Philley. Smith followed with a hard grounder to third baseman Carey, who threw to McDougald at second base to force Hegan. But Hegan slid hard into the second baseman Gil McDougald, his relay throw to first base was wild and two runs scored. The Yankees’ lead was sliced to one, 7-6.

Lopez was using his relief pitchers at will. Mossi was replaced by Ray Narleski in the third inning and Bob Hooper in the fifth. The Yankees, who had not had a hit since the first inning, got a man on base when Mantle walked. Robinson smacked a towering drive to right field. Philley went back and made the play of the game when he reached over the wall to haul in the ball that looked destined for a home run.

Mike Garcia entered the game after Hooper in the sixth. Garcia held the Yankees hitless for two innings. But the Indians could not get anything going and the scored stayed 7-6.

Garcia gave way to Hal Newhouser in the eighth. Prince Hal was in the twilight of his career and was used mostly as a spot starter or in relief duty. Like his predecessors, the old lefty was keeping the Yankees off the bases.

In the top of the ninth, Stengel finally went to his bullpen, summoning Johnny Sain to relieve Reynolds. Sain, like Newhouser, was a fine starter in his day and was in the twilight of his career. Avila greeted Sain with a solo home run to the left-field bleachers, and the game was tied, 7-7. It was Avila’s fourth homer of the year.

In the top of the 10th, Cleveland completed its comeback. With two outs, Smith sent a drive into the left-field stands. The game-winning blast was Smith’s second home run of the season.

Newhouser (2-1) shut down the Yankees in the home half of the 10th for his second win. Sain (2-2) was tagged with the loss. Cleveland banged out 13 hits. Avila and Doby each had three.

Smith, the hero of the day, pointed to another play as the key to the Tribe’s win. “Did you notice Jim Hegan break up a double play and cause McDougald to make a bad throw? It gave us two “runs,” he said.1

“I had the feeling,” said Lopez. “It’s because I’ve seen the way we keep coming back, game after game.”2

“This is a game where you got to bleed and believe,” said Philley.3

“I think it was the most important game we ever won in Yankee Stadium,” said Lopez.4

The New York Giants swept the Indians in the 1954 World Series.

The author accessed Baseball-Reference.com for scores, play-by-play information, and other data, as well as Retrosheet-org.