This article was written by Tom Thress 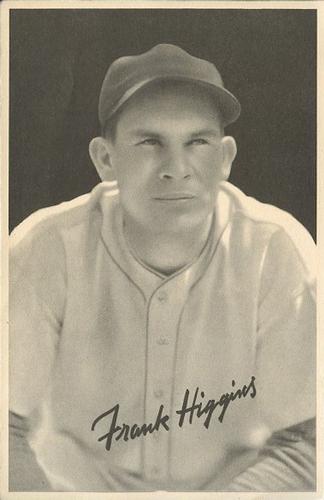 On June 19, 1938, Boston Red Sox third baseman Mike “Pinky” Higgins singled in the eighth inning of the first game of a doubleheader against the Chicago White Sox and went 3-for-3 in the nightcap.1 After an off day on June 20, the Red Sox played another doubleheader, this time against the Detroit Tigers. Higgins went 4-for-4 in the first game (an 8-3 Red Sox victory), giving him eight hits in eight at-bats. This left Higgins three hits shy of the American League record of 11 hits in 11 at-bats, by Tris Speaker on July 8, 9, and 10, 1920.2

The Red Sox threatened in the top of the first inning. A walk to Doc Cramer, a single by Ben Chapman, and an error by Tigers center fielder Chet Laabs on Chapman’s hit put runners on second and third with one out. An intentional walk to Jimmie Foxx loaded the bases, bringing up Red Sox manager Joe Cronin. Cronin flied to Pete Fox in right field. Cramer tried to score but was thrown out by Fox for an inning-ending double play.3

Following a Dixie Walker walk, Rudy York started the scoring with a home run in the bottom of the first inning. This was York’s 19th home run of the season, tying Foxx for the American League lead.4

Higgins led off the second inning with a single, his ninth hit in nine at-bats, but was stranded there.

Higgins’ next chance came in the top of the third inning. A one-out walk to Joe Vosmik, a single by Chapman, and an RBI force out by Foxx gave the Red Sox their first run of the game. Foxx then stole second base and Cronin singled. This brought Higgins up with two outs, runners on first and third, and one run already in. Higgins singled, his 10th hit in 10 at-bats, to drive in Foxx and tie the score, 2-2. A walk to Bobby Doerr loaded the bases, but Johnny Peacock grounded out to end the inning.5

The Tigers regained the lead in the bottom of the third. Walks to Billy Rogell and Walker knocked Wagner out of the game. He was relieved by Archie McKain, who struck out Charlie Gehringer for the first out, but York walked to load the bases. Fox grounded out to Foxx, scoring Rogell with the go-ahead run. The Red Sox intentionally walked Hank Greenberg to reload the bases, but Laabs doubled to right field, scoring Walker and York. The Red Sox issued their second intentional walk of the inning (their fifth walk of the game) to Don Ross, and this time it worked: Lawson fouled out for the third out of the inning, but not before the Tigers took a 5-2 lead.

The Red Sox were retired in order in both the fourth and fifth innings, so Higgins did not bat again until the sixth inning. He led off that inning with a single, his 11th hit in as many at-bats, tying Speaker’s record, but was subsequently caught stealing.

Cronin led off the top of the eighth inning with a single to right field, bringing Higgins up for his fourth plate appearance of the game. Higgins singled to center field, giving himself a major-league record 12 hits in 12 at-bats and bringing the potential tying run to the plate. Doerr walked to load the bases with nobody out. Boots Poffenberger was brought in to replace Lawson. Peacock grounded out to Rogell, scoring Cronin. Pinch-hitter Fabian Gaffke also grounded out to Rogell, scoring Higgins to pull the Red Sox within one run, 5-4. But Cramer lined out to Walker in left field to end the inning.6

The Tigers got two hits in the bottom of the eighth inning but no runs. Poffenberger retired the Red Sox in order in the top of the ninth and the Detroit Tigers had a 5-4 victory.

Higgins finally made an out in his first at-bat the next day when Vern Kennedy struck him out in the second inning of an 8-2 Tigers victory.7

At the time of Higgins’s feat, newspaper reports unanimously claimed this as a new major-league record, breaking the previous record of 11 consecutive hits by Tris Speaker in 1920. Higgins’s feat was still regarded as a standalone major-league record when Dropo tied his record in 1952. In 2009, however, it was discovered by Trent McCotter that catcher Johnny Kling of the Chicago Cubs (then called the Colts) had 12 consecutive hits from August 24 through August 29, 1902. Like Dropo, Kling made his 12 hits in 12 consecutive plate appearances with no intervening walks.9