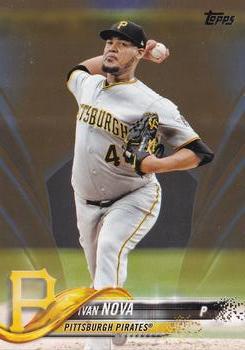 Some 24,843 showed up to see the Pittsburgh Pirates play the Arizona Diamondbacks on a pleasant summer evening along the banks of the Allegheny River. Many were also looking forward to the fireworks show scheduled after the game. Little did they know that they would see fireworks before the game finally finished in extra innings.

Arizona led the National League West and was looking to expand on its lead. The Diamondbacks won their earlier series with the Pirates at home and won their first game in Pittsburgh the previous night, 9-3. The Pirates were in fourth place in the NL Central and needed a win to work their way back to .500 and stay in contention for a playoff spot.

Nova was almost flawless, pitching eight scoreless innings. He gave up three hits to the Diamondbacks. “That’s [his] third straight start, but this one was as good as any game we’ve seen him pitch,” manager Clint Hurdle said.1

Arizona’s Paul Goldschmidt singled in the first but didn’t go anywhere when Nova got the next two batters out on seven pitches. After striking out two batters in the second, Nova gave up a single to Jeff Mathis. Although Mathis eventually reached third, a terrific diving catch by Starling Marte saved the run and kept Nova’s shutout going.

Nick Ahmed doubled in the fifth for the Diamondbacks’ third hit. He reached third on a groundout to second but again Nova stayed focused and prevented the Diamondbacks from getting a runner home.

Nova relied on his curveball all night. He threw 20 curves, three for swinging strikes and seven for called strikes. “Seems like the one I had in Chicago,” he said after the game. “It was really good over there. The next start, it wasn’t there. We kept working. Finally got it back today.”2

Patrick Corbin started for Arizona. He entered the game with a 3.48 ERA and a 6-3 record. Corbin had pitched 5⅓ innings against the Pirates on June 11. In that game, he gave up five runs before he was pulled, but the Diamondbacks bounced back to win the game when they scored five runs in the eighth inning.

Corbin scattered three Pirates hits in his seven innings on the mound. He gave up a single to rookie Austin Meadows in the first. Meadows stole second and reached third on a passed ball but Corbin got out of the jam when he struck out David Freese.

Corbin struck out six more Pirates and retired the next 13 Pirates batters before allowing a second single in the fifth, this one by Jordy Mercer. Once again, the Pirates left the runner stranded when Corbin struck out Sean Rodriguez.

Meadows got his second hit of the game, a two-out single in the sixth. Those two hits raised his batting average to .343 in the 29 games he played since being called up on May 18. Once again, Meadows was left stranded when Corbin got Starling Marte to fly out to center field.

Corbin was removed for a pinch-hitter in the eighth. He left the game with 12 strikeouts, matching his career high, set on April 4 in a 3-0 victory over the Los Angeles Dodgers. “You wish they could all be like that,” he said after the game. “We had a good game plan, I was making some good pitches and [my catcher Jeff Mathis] was calling a lot of good pitches.”3

Felipe Vazquez relieved Corbin in the top of the ninth. He kept the Diamondbacks from grabbing the lead despite two fielding errors. Kyle Crick took over in the 10th. After giving up a double to Jarrod Dyson, who then stole third, Crick struck out John Ryan Murphy to end the scoring threat.

The Diamondbacks got a baserunner to third base in the third, fifth, ninth, and 10th innings but couldn’t get any of them across home plate. They finally drew blood in the 11th. With runners on first and second and two outs, Ketel Marte hit a weak groundball in front of home plate. Catcher Elias Diaz threw the ball away when he tried to get Marte out at first. “Tough play,” Diaz said afterward. “I tried to be aggressive with the ball. I know the runner was Marte. He can run.”4

David Lamb scored from second and the Diamondbacks ended up with runners on second and third. Edgar Santana got Ahmed to fly out and prevent Arizona from adding to its lead.

Hurdle expressed his frustration after the game, saying, “We [tried] to make a play that probably wasn’t there, if we look at the videotape and we walk Elias through it. Maybe a fake throw and just hold it. The ball is in the infield. Where it goes, some learning opportunities for us to learn from and get better. We need to play better.”5

When Corbin left the game, the Diamondbacks relied on their bullpen, using six pitchers over the next six innings. The bullpen kept the Pirates hitless through the 10th inning. In the 11th Brad Boxberger walked the first two batters he faced. It was the first time the Pirates had a runner in scoring position since the first inning.

Josh Harrison’s sacrifice moved the runners up. Boxberger intentionally walked Meadows to load the bases and set up a possible double play. Starling Marte hit the first pitch from Boxberger, a groundball deep in the hole on the left side. Lamb tried to get the runner, Gregory Polanco, at the plate, but his throw was off and Polanco scored to tie the game. Despite having two more chances to grab the lead, the Pirates could not bring a runner home.

The Pirates put runners on first and second in the 12th, but Harrison hit an inning-ending popout to second base. It was the last time the Pirates put themselves in a position to win. “We created opportunities to put ourselves on the other side of the game,” Hurdle said. “We didn’t do it.”6

After getting the Diamondbacks out in order in the 12th, Tyler Glasnow walked Jon Jay to lead off the 13th inning. With two outs he wild-pitched Jay to second. Ketel Marte got a hit to center field to score Jay and give Arizona the lead. Marte tried for second but was thrown out in a rundown between first and second.

When he returned to the dugout, Marte slammed his helmet down in frustration. “I don’t want to get an out in that situation,” he said later. “Part of my game is my emotion. I get mad sometimes, but we got the win, so I’m happy.”7

Arizona manager Torey Lovullo had a different take on the play, saying, “He’s such a gifted player and he really grinded through that at-bat. [He] came through with a big hit in the perfect moment.”8

It was the Pirates’ fourth loss in five games. Nova, who had pitched a gem, expressed his frustration saying, “A game like this, we should be able to get it. We should be able to get a win. I did my part, trying to give my team a chance to win a game. We had some opportunities to win and we didn’t win the game when we got the chance. They took it away from us.”9

After the excitement of the 12th inning and the disappointment at watching their team fail to win the pitchers’ duel between Nova and Corbin, fans had to settle for the promised fireworks show from barges on the Allegheny River.

The Pirates were 36-39 on this date. They were in fourth place in the NL Central Division. Pittsburgh finished with a winning record of 82-79 but fell to 13 games behind the Milwaukee Brewers when the season ended. They traded catcher David Freese to the Los Angeles Dodgers in August when they were no longer in contention for a playoff spot. They also traded Ivan Nova, the loser of the pitching duel in this game, to the White Sox for a minor leaguer after the season.

The Diamondbacks held a 2½-game lead in the NL West on this date with a 42-33 record. After going 8-19 in September, they failed to make the playoffs. They finished the season with an 82-80 record. The team traded one of its stars, Paul Goldschmidt, to the St. Louis Cardinals for three players after the season. Although he was perhaps the best homegrown player on the team, he was eligible for free agency after the 2019 season. Goldschmidt had won his fourth Silver Slugger award at the end of the season.