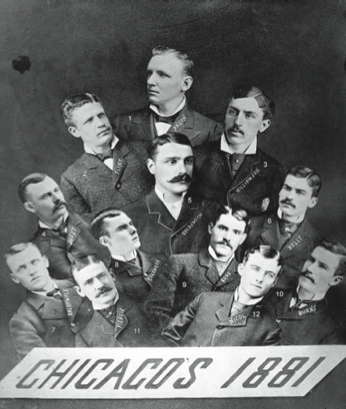 They did it under the shrewd front-office guidance of Albert Spalding, and with a Stone Age version of Murderers’ Row that included Hall of Famers Adrian “Cap” Anson and Mike “King” Kelly, and one of the 19th century’s great sluggers, Abner Dalrymple. Dalrymple was considered so dangerous at the plate in his prime that he became the first player to be intentionally walked with the bases loaded.

Then there was center fielder George “Piano Legs” Gore, one of the era’s most valuable players, who was on seven pennant winners, all in the 1880s. On June 25, 1881, he did something truly extraordinary, running into the record book as the first player to steal seven bases in a game. (Only Billy Hamilton, in 1894, has matched the feat.)

Gore was a complete ballplayer. He hit for average, sometimes for power (he was the second person to smack five extra-base hits in a game), he could field, and he could throw.

Gore finished his 14-year career with more runs (1,327) than games played (1,310), reflecting the sturdy legwork of a player who earned his nickname because of superhero-shaped calf muscles.

In 1880 Gore led the National League in batting (.360). His average took a nosedive in 1881 (he finished at .298), but he was an artist at getting on and around the bases, and that Saturday game in June, a 12–8 win over the visiting Providence Grays, was probably his masterpiece.

According to the Chicago Daily Tribune, about 2,000 fans saw an offensive outbreak that “was full of action and at all times interesting. … Chicago won by virtue of superiority in every point of play, but notably so in base-running. Gore’s performances in this respect were something phenomenal.”[fn]1. Chicago Daily Tribune, June 26, 1881.[/fn]

At the time, stolen bases were not part of the official statistical records in the National League, but the Tribune nonetheless noted that Gore had set “a record which as a whole has probably never been equaled in a League game.”[fn]Ibid.[/fn]

The game itself wasn’t a thing of beauty: “The contest was characterized by numerous errors in fielding,” the Tribune reported. The teams combined to make 14 errors (10 by the Providence club). There were three passed balls (all by Gross), and only one of Chicago’s dozen runs was earned.[fn]Ibid.[/fn]

At the time the White Stockings were in the midst of their longest winning streak of the season (eight games) and hottest stretch (they went 18–3 from June 4 though July 13). Gore’s record-setting performance came in the second of a three-game set at home against Providence, during which Chicago outscored the Grays 39–20.

As the two teams took the field for Saturday’s game, Chicago was in first place with a threegame lead over the second-place Buffalo Bisons, and Providence was in last place, one win behind Cleveland.

Chicago took a 3–0 lead in the first. Batting second, the left-handed-swinging Gore reached on either an error or a fielder’s choice, stole second, and scored on Anson’s double. He had base hits in the second, fourth, and sixth innings— subsequently stealing bases and scoring each time. Those helped Chicago build a 10–4 lead through six innings.

Gore walked in the eighth and scored on Ned Williamson’s two-run triple to give Chicago a 12–4 lead. Providence scored its last four runs in the top of the ninth on four hits and a wild pitch.

National League rules banned Sunday baseball at the time, so the two teams finished their three-game set on Monday, a 19–12 Chicago victory.

After the series the Grays turned their fortunes around, posting the best record in the league for the stretch run (35–17–1). That included a change in field managers, with outfielder Tom York replacing second baseman Jack Farrell. It was Charles “Old Hoss” Radbourn’s rookie season, and he led Providence with a 25–11 record.

Chicago went 33–18 after the Providence series to finish 56–28, winning the pennant by nine games over the second-place Grays. It was a familiar pattern—Chicago won three straight pennants, 1880–82, and Providence finished second each time.

And Gore? He kept on running wild, and not just on the basepaths. Anson considered Gore one of the best players of the era, and even included him on his list of all-time greats, but claimed, “Women and wine brought about his downfall.” Gore was suspended from the 1885 World Series for drunkenness, and a year later Chicago sold him to the New York Giants because of all the drinking and cavorting. He helped New York win two pennants.

Ironically, Gore never “led” the league in stolen bases—the National League didn’t start keeping official records on the statistic until 1886. He stole 23 bases that year, a career-high 39 the next, and is credited with 170 stolen bases for his career. But Gore always will be remembered for the day he swiped seven in one game. 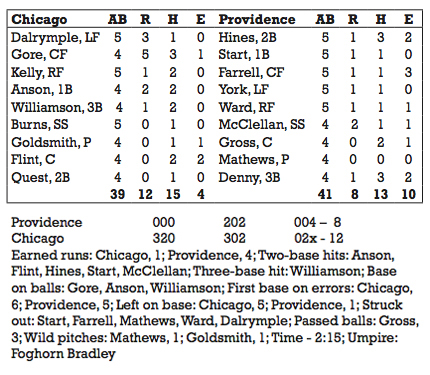