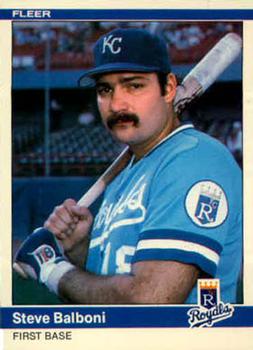 The 1984 Kansas City Royals were nobody’s idea of an offensive juggernaut. They pulled off the rather amazing feat of making the playoffs despite being outscored for the season, one of only four teams to do that since divisional play began in 1969. Kansas City finished 11th in the American League in runs scored. Even on this particular night, there was no reason to expect an offensive explosion. The Royals entered the game at 30-37 and had scored 19 runs total on the six-game West Coast road trip they had just completed. The Oakland A’s were having a slightly better season, with a 34-38 record coming into the game. However, the A’s had fired manager Steve Boros a month earlier and were only 14-14 under his successor, Jackie Moore, so things weren’t exactly rosy for them either.

Still, in a mediocre AL West, neither team could be considered out of the race; Oakland was three games behind California with the Royals 4½ games out of first.

That six-game West Coast road trip the Royals had just returned from included three games in Oakland, with the Athletics winning two. This game featured a starting-pitcher rematch from the last game of that series in California, with Bill Krueger starting for the A’s and Mark Gubicza taking the mound for the Royals.

Gubicza had been kicked around pretty good in the game at Oakland, allowing six runs in four innings, including a grand slam by Dave Kingman in the first inning. On this night, though, he got off to a much better start, retiring the A’s in order in the first.

Krueger had kept the Royals at bay in the previous match, scattering eight hits over 7⅔ innings. In this game, it was his turn to struggle early. Willie Wilson and Butch Davis started the inning with singles before George Brett belted a home run to put the Royals ahead 3-0. Hal McRae followed with a single and took second when center fielder Dwayne Murphy misplayed the ball. Next, Steve Balboni’s grounder was booted by Oakland shortstop Tony Phillips. Leon Roberts walked, Don Slaught’s single scored two runs, and Greg Pryor’s single scored another. That ended Krueger’s outing. Without recording an out, he had allowed six hits and five earned runs, causing his ERA to jump from 3.02 to 3.86. Later research found that the eight runs Krueger gave up were the most runs allowed by a starting pitcher who did not record an out since at least 1920. That mark has since been tied but not surpassed.1

Reliever Gorman Heimueller restored a bit of order, getting a groundout from U.L. Washington and a sacrifice fly from Wilson. But Davis singled again to drive in the eighth run of the inning. Brett grounded out to mercifully end the frame.

Gubicza had been suffering from a lack of run support, with his teammates giving him a total of six runs in the seven losses he had to this point in the season. Now the pressure was off them and on him to protect the big lead. After all, a lot can happen in eight innings.

“In the dugout, they kept asking me if I had enough runs now,” a happy Gubicza said of his teammates.2

As for protecting the lead, Gubicza continued to succeed. He retired the first 10 hitters, a streak stopped when Murphy drew a walk in the fourth. Two popups later, the inning was over.

Heimueller had retired seven straight batters, but Wilson singled leading off the fourth inning. It was the 1,000th hit of Wilson’s career, and he received a standing ovation from the crowd of 34,204. McRae laced a two-out double to drive in Wilson for a 9-0 lead.

The A’s collected their first hit in the fifth, a single by Bruce Bochte. But a double play ended the inning with Gubicza still in command.

Heimueller had given a valiant effort in relief for five innings, but he ran into trouble in the sixth. Wilson and Brett collected singles, and with two outs Balboni launched his ninth home run of the season. The three-run shot was his fourth homer in three games, and it gave the Royals a 12-0 advantage.

At this point Royals manager Dick Howser decided the game was definitely out of hand, pulling stars Brett and Wilson from the game. Jackie Moore also took this chance to rest a few of Oakland’s regulars, taking Carney Lansford and Joe Morgan from the lineup. However, the Royals weren’t done scoring. The seventh inning saw a four-run outburst by Kansas City. Slaught started the inning with a double and came around to score on two groundouts. Pat Sheridan, in for Wilson, restarted the rally with a double. Lansford’s replacement at third base, Jim Essian, misplayed a Davis grounder. That allowed Sheridan to score, with Davis reaching second. He scored on Buddy Biancalana’s single, and Biancalana scored on McRae’s double. That brought the score to 16-0.

Heimueller was obviously tired after pitching 6⅔ innings, but with a doubleheader scheduled for the next day, Moore did not want to use any more relievers in a lost cause. So he turned to utilityman Garry Hancock, bringing him in from right field for the first (and only) pitching appearance in his career. Another utility player, Bill Almon, replaced Hancock in right field.

“Hancock has pitched batting practice for us and has done a good job of getting the ball over the plate. It was sit-back-and-bite-the-bullet time. This kind of game … there’s nothing you can do about it,” Moore said afterward.3

Hancock did a good job getting the ball over the plate in this one, retiring all four batters he faced to spare the A’s further indignity.

“I used two pitches, my fastball and my dead-fish fastball,” Hancock joked after the game.4

“The only problem with that is your dead-fish fastball is the same speed as your regular fastball,” Almon (who had made his first career appearance at catcher in the ninth inning) replied teasingly.5

Royals ace reliever and humorist Dan Quisenberry deadpanned, “Garry’s a student of the game. Like all the great ones, he stays within his limits. You can see the confidence he’s built through the years. No question, he’ll develop into a Cy Young Award winner. He knows it, the people around the league know it. Now it’s strictly up to him.”6

Gubicza did his part to spare the Royals bullpen from working in this lopsided game, pitching a complete game with three hits (all singles), four walks, and five strikeouts. He also got a bit of revenge for his previous start.

“The whole week I was geared up for this game. I was terrible that last start against Oakland. They pretty much embarrassed me. I wanted to show them I was a better pitcher,” Gubicza said after the game.7

For the A’s, the defeat was the worst the franchise had suffered since their move to Oakland after the 1967 season. It was the biggest victory margin for the Royals since they beat Minnesota 17-1 on the next to last day of the 1980 season.

If this were a fictional work, the Royals would use this big win as a springboard for their run to the division title. Kansas City did end up capturing the AL West pennant, but it took them almost another month to finally get hot, as they went 44-27 from July 19 through the end of the year, turning a 41-50 record and eight-game deficit into a title. But in the short term, the A’s would sweep the doubleheader between the two teams the next day, and also win the fourth game of the series.

Besides the articles listed in the Notes, the author consulted baseball-reference.com and retrosheet.org.