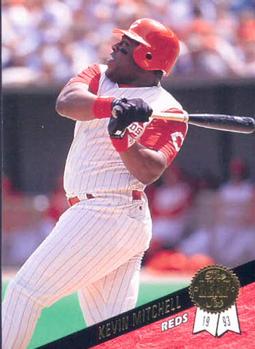 The San Diego Padres hosted the Cincinnati Reds in a National League West Division game two weeks before the 1993 All-Star break. Neither team was making a move in the standings. The sixth-place Padres (28-44) had returned to Jack Murphy Stadium for a four-game series against the Reds following a 3-6 road trip. They lost the first game of this series. (This would be the second game.) Meanwhile, the fifth-place Reds (34-39) had won two of their last three but only five of their last 10 and were still 15 games out of first place in the division. Still, a modest crowd of 17,758 turned out for the game. Undoubtedly many came to watch the Upper Deck Heroes of Baseball Game, which took place before the Reds-Padres game. The Heroes of Baseball Game featured a contest between the all-time Padres and a team of 1969 Heroes.

For the home-team Padres, manager Jim Riggleman penciled in Wally Whitehurst as his starter. The tall right-hander, in his first season in San Diego, had won his last two decisions, but the Padres’ lineup was not at full strength. Geoff Hobson of the Cincinnati Enquirer wrote, “[Tony] Gwynn and his four batting titles were sidelined with a strained calf muscle, Fred McGriff and his 16 homers were sent home with the flu, and Gary Sheffield and his $3.1 million salary were unpacking in Miami.”1 Cincinnati’s Tim Belcher was handed the ball to face the Padres. The 1988 National League Rookie Pitcher of the Year had won four of his last five decisions, and only four other victories had been credited to Cincinnati starters since May 17.2

Cincinnati notched singles in each of the first two innings (Hal Morris and Chris Sabo) but did not score. Whitehurst started the third inning by fanning Belcher and Bip Roberts. Barry Larkin then hit a hard one-hopper back to the mound, which struck Whitehurst on the outside of his right knee, knocking him down and out of the game. Riggleman called on 25-year-old rookie right-hander Tim Worrell to relieve Whitehurst, marking Worrell’s major-league debut. The Padres had selected Worrell in the 20th round of the 1989 free-agent draft, and he had signed the next spring. With Larkin on first, Worrell pitched a full count to Morris before walking him. Kevin Mitchell then swung at Worrell’s first offering and “welcomed him to the majors and to town with a towering three-run homer”3 for his 11th home run of the season. Larkin’s shot was reminiscent of the May 11 game between Cincinnati and San Diego when, according to the Cincinnati Enquirer, “Belcher had to leave the game with two outs in the third after Tony Gwynn lined a shot off Belcher’s right forearm.”4

Mitchell had been bothered by a sore left shoulder for much of June. Earlier in the week he had received a cortisone shot for relief, but after this game, Mitchell told reporters, “I came to the park today and told them it’s stiff, but just my presence helps, even if I don’t do anything in the game. It hurts every time I swing. If I can block it out I’ll be all right.”5

Belcher was perfect through the first three frames. He threw just 8, 11, and 12 pitches in those innings, notching four strikeouts. Bill Bean singled to lead off the Padres’ fourth. An out later, Belcher hit Derek Bell, moving Bean to second, but Belcher retired Phil Plantier and Phil Clark to get out of the inning and preserve the Reds’ lead.

Belcher wasn’t so fortunate in the fifth. Kevin Higgins stroked a one-out single to left, and Ricky Gutierrez lined a triple into the right-center gap, breaking up the shutout. Craig Shipley pinch-hit for Worrell and grounded an RBI single to left. Shipley stole second and moved to third on a wild pitch, but Belcher settled down and no more Padres crossed the plate. In fact, Belcher pitched hitless baseball from that point of the game on (allowing just a two-out walk to Gutierrez in the seventh).

San Diego rookie Kerry Taylor, who had been a starter for the Padres earlier in the season, replaced Worrell to pitch a scoreless sixth (although he used 26 pitches), and fellow rookie Mark Ettles pitched a scoreless three-up, three-down seventh for San Diego with an economical six-pitch inning.

In the June 24 trade that sent Sheffield to the Marlins, the Padres acquired yet another rookie, Trevor Hoffman.6 The future Hall of Famer entered the game in the top of the eighth with the Reds clinging to a one-run lead. After retiring Morris on a grounder to short, however, Hoffman was touched for three runs, sealing the win for the Reds. Mitchell walked (Jacob Brumfield ran for him), Roberto Kelly doubled, and Reggie Sanders singled to center. Brumfield scored but Kelly was thrown out at the plate by an excellent throw from center fielder Bell. Sabo and Joe Oliver each singled, with Oliver’s safety plating Sanders. Then, with Belcher in the batter’s box, Hoffman uncorked a wild pitch and the ball eluded catcher Higgins, permitting Sabo to score from second base and making the score 6-2. Hoffman struck out Belcher to end the inning, but Cincinnati had tagged Hoffman in his Padres debut for three runs (two earned) on four hits and a walk.

Riggleman sent Pat Gomez to the mound in the ninth. The fifth Padres rookie pitcher (and sixth overall) of the game faced five batters, yielding a walk to Larkin and a single to Brumfield, but he kept the score at 6-2, and that was the final score of the game.

Mixing his four-hitter with eight strikeouts, Belcher won his sixth game of the season, tying him with Jose Rijo for the most wins on the Reds staff.7 It was his fourth complete game of the season, and he lowered his earned-run average to 3.38. Belcher had pitched at least six innings in each of his previous seven starts. Cincinnati had now won the first two games of the series against the Padres, but they did not gain any ground in the standings. However, the Reds upped their record against the Padres to 6-0 for the season.8 In those six games, Mitchell collected 11 hits in 21 at-bats (a .524 clip), including three home runs and nine runs batted in. With the season nearing the hallway point, Mitchell’s batting average had climbed to .372. With the third-inning round-tripper, Mitchell extended his career-best hitting streak to 19 games, which was also the longest in the league to this point.9 Further, he claimed he used the same bat during the streak. He “cracked the handle during a 16-13 win at Colorado,”10 in which he hit a homer, a triple, and two doubles, drew a walk, scored five runs, and knocked in four, but he had been taping his lucky bat since.

The members of the Society for American Baseball Research held their 1993 annual convention in San Diego, hosted by the Ted Williams Chapter of SABR. Hall of Famer Bobby Doerr appeared at the opening-night reception, mingling with members. Bruce Bochy and Kurt Bevacqua, members of the 1984 National League champion Padres, were part of a panel discussion on their magical season that took them to the World Series. Bevacqua “served double duty as emcee of the [Saturday evening] banquet and introduced featured speaker Dick Williams who entertained the crowd with stories from his managerial days.”11 As part of the convention, the SABR attendees journeyed to Jack Murphy Stadium on Friday the 25th to watch the Upper Deck Heroes of Baseball Game, followed by the Padres-Reds game.

6 Hoffman had been originally drafted by the Cincinnati Reds in the 11th round of the free-agent draft on June 5, 1989 (he signed four days later). The Florida Marlins selected him from the Reds with the eighth overall pick in the 1992 expansion draft. Hoffman was then traded in midseason (June 24, 1993) to the Padres with Jose Martinez and Andres Berumen for Sheffield and Rich Rodriguez. Hoffman remained with San Diego for 16 seasons.

7 Over the next five weeks, Belcher won three more decisions, against one loss, in seven starts for the Reds. On July 31, 1993, he was traded to the Chicago White Sox for Johnny Ruffin and Jeff Pierce.

9 Mitchell’s hitting streak reached 20 games before he went 0-for-4 in a July 1 game against the Houston Astros.