This article was written by Mike Huber and Rachel Hamelers

Twenty days after the D-Day invasion of Normandy, a special baseball game took place in New York City. The world was focused on the Pacific and European battlefronts, but on the American home front the War Loans Sports Committee was developing a series of events to sell War Bonds. One of these events was baseball’s ultimate subway series, also known as the Tri-Cornered Game. 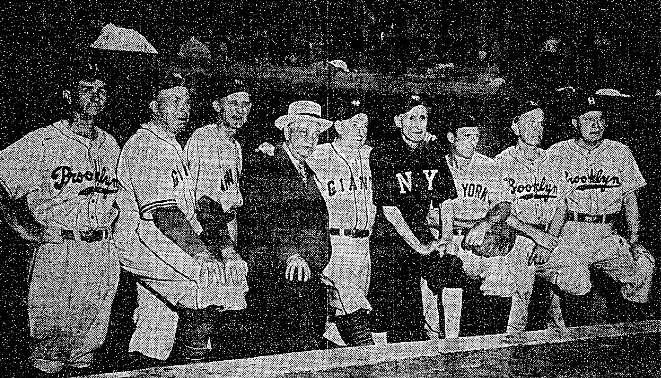 The New York Times exulted over the unusual game, writing “Baseball is more than a hundred years old. Generally speaking, youth is rash and often radical. The ancients are the ultra-conservatives. But, despite its respectable old age, the diamond sport is going completely haywire tonight. … This is a three-ply offering involving Giants, Yankees, and Dodgers in a fantastic fray that is certain of only one result. It will attract a gathering of more than 50,000 and will bring in a sale of approximately $6,000,000 in war bonds.”1

In this fantastic fray, the three New York City teams played in the same game at the Polo Grounds to a crowd of 50,000 fans. One baseball game with three different teams all fielding, hitting, scoring (at least in the case of the Dodgers and the Yankees), and trying to win the title of New York’s best. On the day of the game, the teams had similar positions in the standings (all winning records). The Dodgers and Giants were tied for third place in the National League. (After the Tri-Cornered Game, however, the Dodgers went on a skid, losing 16 consecutive games.) The Yankees were tied with the Boston Red Sox for third place in the American League.

On June 25, the day before the game, the New York Times wrote, “As major league baseball starts its tenth week of its campaign, Greater New York’s three local clubs will pause in their serious pursuit of pennants for the more serious pursuit of war bond dollars.”2 Another story told fans, “The jig-saw puzzle of working out this procedure baffled the best minds of the game until they called upon a mathematics professor at Columbia University, Paul A. Smith. Without scratching his head more than a few hundred times the professor came up with the following layout, which calls for eighteen half-innings to be played, thus”:3

(D = Dodgers, Y = Yankees, G = Giants; In each box the first letter was for the top half of the inning; the second letter for the bottom of the inning).

This round-robin format had each team come to bat six times. Each team batted three times against each of the other two teams’ defenses. In case anyone was confused with this scheme, New York Times writer Arthur Daley suggested that “a sufficient number of traffic policemen be installed at strategic points in order to avoid snarls of various descriptions.”4

An hour or so before the game, 500 wounded servicemen were scheduled to arrive to watch the game. A fungo-hitting contest was held, and an 18-year-old pitcher for Brooklyn named Cal McLish won the event with a 416-foot 5-inch, shot. It was McLish’s rookie season, and he spent 1945 in military service, away from baseball. To his family, he was known as Calvin Coolidge Julius Caesar Tuskahoma McLish.5 In a throwing-for-accuracy competition for catchers, the Dodgers’ Bobby Bragan came closest to throwing the ball from home plate into a barrel at second base, besting five other backstops. There were three heats in a sprint contest. Snuffy Stirnweiss, who would go on to lead the American League in stolen bases in 1944, beat the Giants’ Johnny Rucker, posting a time of 7.8 seconds. Snuffy also had the only stolen base in the game (see the box score below). In the other two heats, Dodgers sprinters Eddie Miksis and Luis Olmo bested the Giants’ Buddy Kerr and the Yanks’ Johnny Lindell, respectively.

Before the game, during infield practice, the famous clown prince of baseball, Al Schacht, entertained the crowd. Milton Berle “boisterously ushered in”6 musical numbers furnished by the Manhattan Beach-based United States Coast Guard band. Former New York City Mayor James J. Walker introduced a contingent of diamond stars from the New York teams, including Zack Wheat, Nap Rucker, Otto Miller (all from the Dodgers), Wally Schang, Bill Dickey (still active but away in the Navy), and Herb Pennock (from the Yankees), and Roger Bresnahan, George “Hooks” Wiltse, and Moose McCormick (from the Giants). Babe Ruth had been scheduled to appear, but he did not show.

The Dodgers and Yankees squeezed into the visitors’ dugout, while the Giants played from the home quarters. The three managers were Joe McCarthy (Yankees), Mel Ott (Giants), and Leo Durocher (Dodgers). Like all the major-league teams, the three New York clubs had lost players to the war, resulting in 16-year-olds playing alongside 41-year-old veterans. Mel Ott started the game for the Giants as their right fielder and was credited with a putout. Brooklyn pitcher Ralph Branca was the third pitcher for the Dodgers. Seventy years after the game, he recalled, “We got a great crowd. For the players in the game, what was happening was very strange: three teams playing in one nine-inning game. But you couldn’t beat the cause.”7 The New York Daily News commented that the game was “the wackiest diamond battle ever conceived,” and that spectators were “amused and confused.”8

As for the game, Brooklyn bested its two rivals. In six turns at the plate, the “Flock,”9 as the New York Times referred to the team, tallied five runs. The Yankees managed a single run, and the Giants got only two hits and were shut out. Wrote the Times, “Opposed by the Yankees in the first inning, the Dodgers immediately got off on the right foot by clipping Al Lyons for a run on a trio of singles by Goody Rosen, Augie Galan, and Dixie Walker.”10 Walker pulled a leg muscleT, and future Hall of Famer Paul Waner replaced him in right field. In the second inning, the Dodgers batted again, this time against the Giants’ Johnny Allen. Mickey Owen worked a walk and Eddie Stanky hit a double, driving in Owen. Frenchy Bordagaray singled to drive in Stanky, and the Dodgers had two more runs.

In the eighth inning, batting against Frank Seward and the Giants, Brooklyn’s Luis Olmo singled, Jack Bolling tripled, and Eddie Stanky drove Bolling home with a fly ball. “Maybe the craziest thing about the game was we [the Dodgers] left before it was over,” recalled Branca.11 “We won and we weren’t there to see it finish.” Why? The Dodgers had to catch a train to make it to Chicago for a June 28 doubleheader. Hal Gregg, Les Webber, and Ralph Branca combined for the Dodgers’ pitching duties. Buddy Kerr made two errors for the Giants against the Yankees in the ninth inning, allowed the Yankees to score their only run.

Presumably, only a cause as big as a World War II War Bond benefit could have brought together all the New York major league teams on one field for one unforgettable and probably unrepeatable game.

We thank Muhlenberg College’s Abby Theofilis and the reference student workers for their assistance with microfilm research.