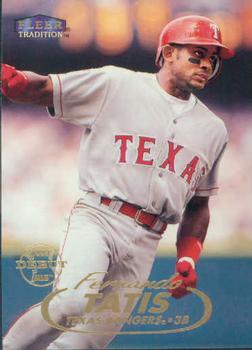 Throughout the game, the winds in left field, which gusted up to 14-22 miles per hour,1 were swirling, creating a vortex of air and trash high over the outfield. The game-time temperature was reported as 62 degrees Fahrenheit, but soon it was dropping into the 50s, creating even lower wind-chill factors and bringing to mind the famous quote from Mark Twain: “The coldest winter I ever spent was a summer in San Francisco.”2

Orel Hershiser took to the mound for the home team. The veteran right-hander had signed with the Giants in the offseason after spending the previous the three campaigns with the Cleveland Indians (and 12 seasons with the Los Angeles Dodgers before that). After winning six straight games from May 10 to June 5, he had lost his last two decisions for the Giants, who were holding down second place in the National League’s West Division, 5½ games behind the San Diego Padres. The Giants had just completed a split with Oakland in a four-game interleague series, losing the final two. The Rangers stood in the American League West Division’s second-place spot (2½ games behind the Anaheim Angels) and had just won three of four games in their series against the Arizona Diamondbacks.3

For Texas, Darren Oliver started on the hill.4 The 27-year-old left-hander had been activated from the 15-day disabled list earlier in the day after having strained a muscle in the back of his left shoulder on June 10 when he hit a double in an interleague game against the Colorado Rockies. His record was 3-5, coupled with a whopping 7.01 earned-run average in 13 starts. Coming into this game, the Rangers led all teams in the major leagues in runs scored per game (6.10), but they were third-worst in the American League (fourth from the bottom overall) in runs allowed (5.49), tied with the Detroit Tigers.

With one out in the top of the first, Hershiser walked Mark McLemore, but then he struck out Rusty Greer and Juan Gonzalez to post a scoreless inning. In the bottom half, Oliver didn’t have time to get into a groove. Stan Javier and Rey Sanchez each sent 1-and-0 count singles into left field, and then Barry Bonds drew a walk on five pitches. After Oliver struck out Charlie Hayes, Chris Jones took his turn with the bases loaded and delivered a line-drive single to center, plating Javier and Sanchez. An out later, J.T. Snow drew a walk before Brian Johnson popped up for the final out. The Giants had sent eight batters to the plate and led 2-0. Oliver had thrown 30 pitches.

Hershiser continued to keep the Rangers’ bats in check through the second and third, allowing only one runner in each inning and adding two more strikeouts to his line score. But that changed in the fourth inning as the heart of the Texas batting order faced him a second time. Gonzalez led off with a comebacker to the mound for the first out. Then Will Clark singled on a line drive to right field. Ivan Rodriguez lined out but Kevin Elster singled through the left side. With a one-strike count, Fernando Tatis crushed Hershiser’s next offering deep beyond the fence in left-center. Left fielder Bonds didn’t even turn around. Texas had claimed a 3-2 lead. Tatis’s home run extended his hitting streak to eight games, which tied his career best. (He doubled the next night, June 27, to extend the streak to nine games.)5

Coming into the bottom of the sixth inning, Oliver had retired seven Giants batters in a row. He retired Jones on a grounder to third baseman Tatis before San Francisco’s Rich Aurilia knotted the score, driving his seventh home run of the season deep down the left-field line.

Then, in the top of the seventh, Texas pounced on Hershiser again. With one out, McLemore doubled into right field. Greer brought him home with a single (another line drive to right), and then Gonzalez blasted his 24th home run of the season deep into the left-field bleachers. After the out, all three batters had hit the ball on the nose. Giants manager Dusty Baker made the long, deliberate trip to the mound and made a pitching change, bringing in right-hander John Johnstone to face the left-handed-batting Clark. Four pitches later, Clark deposited Johnstone’s pitch into the right-field stands. It was his 11th round-tripper of the season. After his homer, Clark tipped his hat to the crowd. He had played for the Giants from 1986 through 1993 and after the game he told reporters, “The thing I can’t deny is that this is the club I got my start with. But I’ve also moved on. The second part of my baseball career is in Texas.”6 Johnstone had come into the game with a 2.93 earned-run average, and he had offered up only four home runs in 34 appearances before Clark took him deep.

That was all of the scoring in the game, as Texas held on to win, 7-3. Hershiser took another loss, and Oliver gained the victory, his fourth. Tim Crabtree had come in to pitch in the seventh inning for Texas and had been effective, keeping the Giants off the scoreboard. He then authored a 1-2-3 eighth inning. It looked as though Crabtree might get the save, but he allowed two-out singles to Javier and Sanchez in the bottom of the ninth, forcing Rangers skipper Johnny Oates to bring in closer John Wetteland. Wetteland threw four pitches to Bonds, striking him out, stranding the runners, and ending the game, earning his 22nd save in the process. Hershiser finished the season with the Giants and then signed with the New York Mets for the 1999 season.

Every position player for the Rangers had at least one hit as Texas won its fourth straight game. Only the pitcher’s position was held hitless (there was no designated hitter, since the contest was played in the National League team’s park). Clark finished the game with a 3-for-5 performance, with one run batted in and two scored. Teammate Elster picked up a double, and two singles, going 3-for-4. Five of the Rangers’ 12 hits went for extra bases, including the three home runs by Tatis, Gonzalez, and Clark. Gonzalez’s runs batted in were his 95th and 96th of the season; the Texas slugger was more than halfway to Hack Wilson’s record of 190 RBIs set in 1930.7 He finished the first half of the 1998 season with an amazing 101 RBIs. Yet in this game, he shared the power spotlight with his teammates. Clark said, “We have some guys who are putting up gaudy numbers, but there are some other guys on this team who are capable of stepping up there and driving in some runs, too.”8

This game was in the middle of a 10-game interleague stretch for both teams. The interleague experience was neutral for Texas, which went 8-8 for the season in games against National League squads. San Francisco was better at 8-5. The Rangers finished the season by winning 42 of 83 games but managed to clinch first place in the AL West. (But then they were swept in the American League Division Series by the New York Yankees.) The Giants had a very similar outcome, going 43-39 after this game, but finished the 1998 season in second place in the National League West Division, 9½ games behind the Padres.

A note about SABR

For four days in June 1998, “the winds at Candlestick Point, Jon Miller’s colorful anecdotes, the heartfelt gratitude of SABR’s award winners, and much more all blended together at the largest gathering of SABR members (437 registrants) of the four California SABR conventions (1980, 1985, 1993, 1998).”9 The SABR convention itself promised to be a “ticket to a baseball bonanza,”10 and the organizers and sponsoring local chapter delivered on that promise. In addition to hearing from a former Giants players panel (Orlando Cepeda, Hank Sauer, Eddie Bressoud, and Mike McCormick) and a former Pacific Coast League players panel (Larry Jansen, Gino Cimoli, Dino Restelli, Bob Roselli, Bud Watkins, and Ernie Broglio), SABR members were treated to a story-filled conversation with Giants announcer Jon Miller and a banquet keynote address by former Giants player and manager Bill Rigney. The 80-year-old now-special assistant to the Oakland Athletics was the fifth former major-league manager to serve as keynote speaker at a SABR convention.11 Then it was off to the ballpark for a Friday night baseball game. As interleague play had only been introduced into the American and National Leagues during the previous season, this was the first interleague game associated with the annual SABR convention.

This was my first SABR convention and the first interleague game I attended. 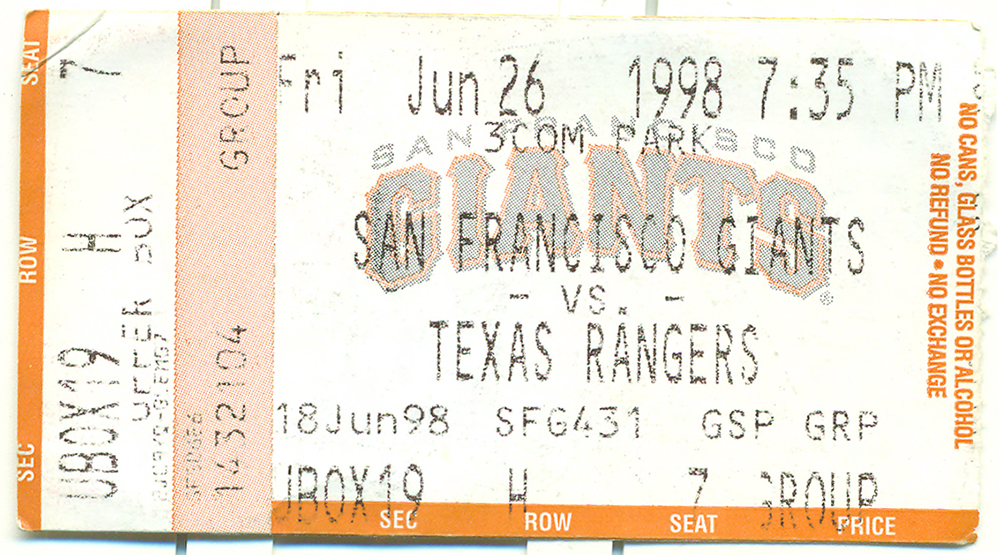 3 Both team’s interleague series had been split in locations. San Francisco played two games (June 22-23) against Oakland at Network Associates Coliseum) before playing at 3Com Park (June 24-25), while Texas had twice hosted the Diamondbacks at The Ballpark in Arlington (June 22-23) before both teams flew to play at Bank One Ballpark in Phoenix (June 24-25).

7 Gonzalez finished the 1998 season with 157 runs batted in, which led the American League.