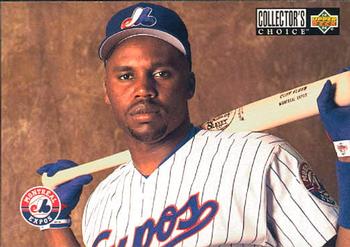 Mention 1994 to a fan of the Montreal Expos, and chances are his or her heart will immediately sink. It was the best of times, but it was also the worst of times, and the worst of times came at the end, when labor troubles shut down the season with the Expos far ahead in their division. For many, the heartache from that bittersweet season still lingers. Yet the best is often forgotten amid the tears.

On June 27 the Expos and their ever-hopeful fans, still waiting after 25 years for their first World Series berth, had only one matter on their minds: the division-leading Atlanta Braves. Although the Expos had been on a roll all month, taking 16 of 23 games, the Braves had been winning, too. As the two teams prepared to go at each other in a three-game showdown series in Montreal, the Braves retained a 2½-game lead. With the hockey season over, Montrealers were now focusing on their red-hot Expos. More than 45,000 boisterous rooters streamed into gloomy Olympic Stadium for Game One.

The Braves were a proven powerhouse, winner of the NL West for the previous three seasons, before a league realignment brought them properly back to the NL East. Their 103 victories in 1993 had been the most in the team’s 122-year history, and, with Greg Maddux, Tom Glavine, John Smoltz, and Steve Avery, their starting rotation was easily the best in baseball.

But the young Expos, managed by the savvy Felipe Alou, were coming on. They, too, had had a good year in 1993, winning 94 games, their second highest total ever. Nonetheless, the team’s success went almost unnoticed in a country caught up in the national hoopla over another World Series for the Toronto Blue Jays.

The Expos were even better in 1994. Alou had a set lineup that was the stuff dreams were made of. He rarely needed to juggle, sending the same eight position players out time after time. All played in at least 100 of the abbreviated season’s 114 games except for catcher Darrin Fletcher, who chalked up 94 games. Third baseman Sean Berry was the oldest of the bunch at 28. The outfield of Moises Alou, Marquis Grissom, and Canadian Larry Walker was the envy of the league. Only one rookie managed to crack the regular lineup: prized prospect Cliff Floyd, at first base.

For the series opener, both teams sent their aces to the mound. Maddux and the Expos’ Ken Hill were at the peak of their game. Each already had 10 wins, on the way to what would likely have been their best seasons if the strike had not intervened. As it was, Hill finished 16-5. Maddux also won 16, while winding up with a league-leading ERA of 1.56, the lowest since Dwight Gooden’s minuscule 1.53 in 1985. On May 6 Maddux had shut out the Expos on four hits. Two days after that, Hill returned the favor, blanking the Braves on three hits over seven innings as the Expos eked out a 1-0 win in Atlanta. A pitchers’ duel seemed certain.

Unsurprisingly, after six innings, the score was tied, 1-1. The Braves went scoreless again in the seventh. In the bottom of the inning, however, the Expos began to get to Maddux. Grissom singled for his third hit of the game. Taking advantage of perhaps the only flaw Maddux had – surrendering stolen bases – the speedy Grissom stole second, then third. Left fielder Lou Frazier, filling in for Larry Walker, worked a rare walk from the Braves’ uber-control artist. Then he swiped second base, too. Moises Alou popped out, but Fletcher was intentionally walked to load the bases. The large crowd roared in anticipation as Wil Cordero came to the plate. With the count even at 1-and-1, the slick-fielding shortstop lined the ball to Ryan Klesko in left. Grissom tagged up and scored easily. The Expos were in front. Author Jonah Keri later wrote: “The resulting ovation was probably one of the five biggest ever for a Big O sacrifice fly.”1 Up stepped Cliff Floyd.

The Expos chose Floyd, an imposing, 21-year-old slugger from the working class South Chicago suburb of Markham, in the first round of the 1991 draft. Two years later, after a fence-busting stint with the Harrisburg Senators of the Eastern League and time with the Triple-A Ottawa Lynx, the 6-foot-5, 220-pound hulk was named The Sporting News’ Minor League Player of the Year. Nowhe was with the Expos. His adjustment to the big leagues had not been easy. Although he was batting a respectable .277, his vaunted power had been missing in action, with only two home runs to show so far in the season.

In a preseason television interview, Floyd said his goal was to not think too much at the plate. “If you got a hundred things on your mind, how you going to hit the ball?” But facing Greg Maddux was a formidable task, thinking or not. In four at-bats against the future Hall of Famer back in May, the youngster had failed to get the ball out of the infield, striking out once. In a phone call before this game, his father cautioned him to concentrate on just getting any kind of a hit. Floyd retorted: “Nah, I’m swinging for the fences tonight.”2

As he settled into the batter’s box, however, the left-handed-hitting Floyd was mired in an 0-for-13 slump, having taken a called third strike against the Braves’ Cy Young hurler only the inning before. As Frazier danced off third, the count went to 2-and-2. Catcher Javy Lopez called for Maddux’s two-strike money pitch, a devilish changeup that dipped alarmingly as it crossed the plate.3 This time the ball dropped so dramatically that it was down around Floyd’s ankles by the time he had a chance to swing. No one, apart from maybe Cliff Floyd himself, could have predicted what happened next. He swung hard and low at the plummeting baseball, golfing at it, as if he were driving off on a par 5 at the course back home where he used to caddy as a teenager. The ball leapt off his bat like a rocket and slammed high up into the right-field stands, 400 feet from home plate. In the twinkling of an eye, the Expos led the Braves 5-1.

Maddux was stunned. Raw rookies don’t homer off the great Greg Maddux, let alone blast the ball off his shoetops for a deep, deep moonshot. Atlanta manager Bobby Cox came out to the mound. His shaken pitcher handed him the ball, and was gone. Floyd’s monster drive sent the Big O crowd into an absolute frenzy, sparking wave after wave of mock war chants and tomahawk chops that didn’t let up until the final out.

Relief pitcher Tim Scott saw it all from the bullpen. “He golfed it out,” he told author Danny Gallagher in 2011, still marveling at the memory. “It was unthinkable, considering that Maddux was pitching. Maddux was shocked, absolutely shocked.”4 Nor did Cliff Floyd forget his big moment. “That was the highlight of the season for me,” he said in 2012. “The Braves … were our nemesis, the team of the 1990s. So when I did that, I felt I helped get us over the hump. There was a packed house. It was something.”5

The rest of the game was anticlimactic. Atlanta nibbled a run off Hill in the eighth, but the Expos replied with two more in their half of the inning. They won in a breeze, 7-2. The 1994 Expos were on their way.

Gallagher, Danny. “Cliff Floyd, he of the Bunyanesque, Samson-style power, fully expects he will be hitting a few 500-foot dingers down the road in the majors,” The Globe and Mail (Toronto), March 29, 1993.

1 Jonah Keri, Up, Up, & Away: The Kid, The Hawk, Vladi, Pedro, Le Grand Orange, Youppi!, The Crazy Business of Baseball & the Ill-fated but Unforgettable Montreal Expos (Toronto: Random House of Canada, 2014), 303.