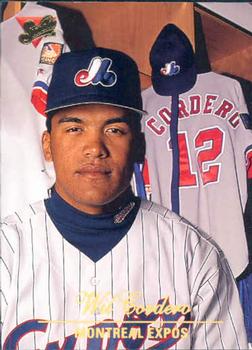 The Atlanta Braves came to Montreal for a three-game series in late June of 1994 with a 2½-game lead in the NL East over the Expos and every reason to be confident. The Braves team was a juggernaut; they had finished first in their division for three consecutive years and had made it to the World Series in 1991 and 1992.1 After 1994, the Braves would go on to finish first in the National League East an astonishing 11 straight years. The only time they did not finish first between 1991 and 2005 was in 1994, when the season ended prematurely because of the players’ strike with the Braves in second place six games behind Montreal. The Expos were looking over their shoulders at Atlanta, but that was only to say goodbye.

The June 28, 1994, game was the second of the three-game set. In the opener, the Expos beat ace Greg Maddux, 7-2, with the help of a Cliff Floyd home run. In the second game, the Braves came back with Tom Glavine, another future Hall of Famer. Glavine had won 20 games three years in a row and had finished in the top three in the Cy Young Award voting each year, winning the trophy in 1991. So there was no reason for the Braves faithful to doubt that a comeback win was in the offing.2

The Expos fans were more than ready; while attendance at the Tuesday game was down about 5,000 from the Monday opener, it was still above 40,000, and the three-day weekday series averaged almost 44,000 per game. The Expos welcomed back All-Star Larry Walker, who had been suspended four games for charging a Pirates hurler earlier in the season.3

The Expos started 23-year-old lefty Kirk Rueter, who was 3-1 after 12 starts but with a less-than-sparkling 5.44 ERA. Things went bad quickly for Rueter in the top of the first; after striking out left fielder Dave Gallagher and getting shortstop Jeff Blauser to ground out, he walked Roberto Kelly and then gave up back-to-back doubles to Fred McGriff and David Justice to score two runs.

The Expos got a run back off Glavine in the bottom of the inning when Walker singled home Rondell White. They scored two more runs on a single, double, groundout, and suicide squeeze to take a 3-2 lead after two innings.

It didn’t take long for the Expos’ new lead to evaporate. In the top of the third, Rueter gave up singles to Blauser and Kelly and walked McGriff to load the bases before uncorking a wild pitch that scored Blauser. David Justice’s subsequent run-scoring groundout was all manager Felipe Alou needed to see and he yanked Rueter with one out and the Expos down 4-3. Gil Heredia, replacing Rueter, allowed a sacrifice fly to make the game 5-3.

Heredia and Glavine settled down into a brief pitchers’ duel and there was no further scoring until the seventh inning. In the top of the seventh, right-hander Heredia, in his fifth inning of relief, gave up a single to the Braves’ Bill Pecota, batting eighth. After Glavine sacrificed Pecota to second, Tony Tarasco (who had entered the game earlier as a pinch-hitter and left-field replacement for Dave Gallagher) singled to right field, but Moises Alou threw out Pecota at the plate for the second out of the inning, with Tarasco advancing to second. Manager Alou brought in Tim Scott, another righty, to pitch to the Braves’ Jeff Blauser. Scott entered the game via a double switch; utility infielder Freddie Benavides entered the game to play second base and bat ninth, while Scott replaced Sean Berry in the seventh spot in the order and Mike Lansing moved from second to third base. Blauser rudely welcomed Scott with a single through the hole into left field to score Tarasco, but then got caught in a rundown trying to advance to second base and was put out in a rundown to end the inning with the Braves up 6-3.

Braves manager Bobby Cox brought in lefty Mike Stanton to start the bottom of the eighth and face the 4-5-6 hitters in the Expos lineup. The move proved disastrous for Atlanta, as Walker singled to center and Wil Cordero homered on a line to deep left field to delight the Olympic Stadium crowd and bring the Expos back into the game, trailing 6-5. That was enough for Cox and he called for righty Greg McMichael from the bullpen to face Lenny Webster, who lined out to deep right for the first out. The next spot in the order belonged to Scott because of the previous double switch. Continuing the chess match, Alou brought in Darrin Fletcher to pinch-hit for Scott and was immediately rewarded when Fletcher doubled to left. Alou called on Tim Spehr to pinch-run for him. The strategizing proved successful when Mike Lansing doubled to left on a 1-and-1 pitch, scoring Spehr and tying the game at 6-6.

So the rivals moved, tied, into the climactic ninth inning. Felipe Alou brought in his trusted reliever (and nephew) Mel Rojas to pitch. Rojas began well, striking out eighth-place hitter Pecota on three pitches to bring up the pitcher’s spot. Bobby Cox sent up Ryan Klesko, a young power-hitting lefty swinger who had had only 31 at-bats with the Braves before the 1994 season. Klesko took an 0-1 pitch down the right-field line for a solo homer, quieting the partisan crowd and giving the Braves a 7-6 lead. Stung, Rojas struck out Tarasco and induced Blauser to ground out to end the inning, but the Expos entered the bottom of the ninth with their backs to the wall.

Bobby Cox brought in reliever Steve Bedrosian to close out the game against White, Alou, and Walker. The 36-year-old Bedrosian was back with the Braves, having started there before moving on to great success with the Philadelphia Phillies. He had not recorded a save since the 1991 season, but in some ways seemed the perfect choice to try to put the game away – of his 184 career saves, 27 came against the Expos, more than against any other team. Cox couldn’t have known that not only would Bedrosian not save this game, he would not record a save again before his 14-year career ended in 1995.

White took a 2-and-1 pitch to right field for a single, and then waited for the count to go to 3-and-1 on Alou before stealing second base. Alou walked on the next pitch, putting two runners on for Walker with nobody out. He responded with a single to right field to score White and move Alou to third, tying the game again. This blow gave Walker a 4-for-5 day on his return to the team. The delirious Expos fans didn’t have time to appreciate this, however, before Wil Cordero worked Bedrosian to a 3-and-2 count and then hit the ball through the hole into left field for another single, scoring Alou and winning the game, 8-7. Bedrosian had given up three hits and two runs, losing the lead and the game without recording an out.

The Braves press called this game “easily their ugliest loss of the year”4 because of the two blown leads. Two games of the 2½-game lead had been erased by Expos heroics, and it didn’t escape attention that the Expos were doing it all with less than half the payroll of the lordly Braves.5 The Expos lost the next day in the series finale (to a great pitching performance by yet another future Hall of Famer, John Smoltz) and wouldn’t take the division lead for good until July 22, but the games of June 27 and 28 convinced the Braves, and the baseball world, that these Expos were for real.

2 Glavine would finish his career with more wins against the Expos/Nationals franchise (33) than any other franchise.

3 Walker was not paid during the suspension and was none too happy about it: Joseph A. Reaves, “Expos’ ‘Fiscal Restraint’ Doesn’t Impress Walker,” Chicago Tribune, July 3, 1994. Walker filed a grievance against the club through the players association.