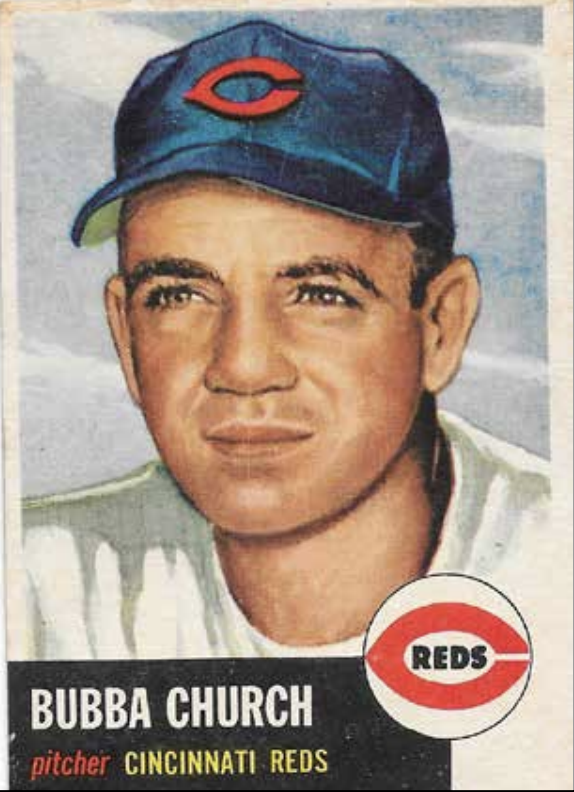 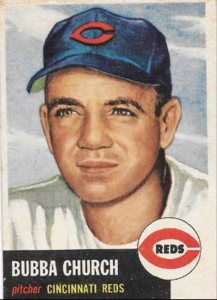 After having been traded from the Philadelphia Phillies to the Cincinnati Reds in late May 1952 and making nine appearances in June with disappointing results, Bubba Church was looking for a positive turnaround in his season. He needed a good outing to boost his confidence. With two fine seasons with the Philadelphia Phillies under his belt, he wasn’t used to the struggle he was experiencing. For 8⅔ innings in the first game of a home doubleheader against the Chicago Cubs on June 29, it appeared Church was finally going to realize his much-needed breakthrough. But the bottom fell out on his effort before he could complete the game, and the Cubs wound up scoring seven runs to defeat the Reds.

Church had been an important cog in the dramatic 1950 pennant-winning season by the Phillies’ Whiz Kids. The 25-year-old rookie worked his way into the starting rotation by mid-July, and he finished the season with an 8-6 record and a 2.73 ERA while completing eight of his 18 starts. He finished fourth in the voting for National League Rookie of the Year.

In 1951 Church emerged as the number-two starter for the Phillies, behind Robin Roberts. He won 15 games while posting a 3.53 ERA and four shutouts among his 15 complete games.

During spring training in 1952, Church had pitched ineffectively after hurting his arm. He clashed with Phillies manager Eddie Sawyer and was used sparingly during the first four weeks of the season.1 In late May he was traded to Cincinnati for pitcher Kent Peterson and outfielder Johnny Wyrostek.

After a no-decision in his first outing for the Reds on May 27, Church made nine appearances in June that included four starts and five relief efforts. During that stretch he struggled to get back on track, as he compiled a 7.56 ERA and two losses.

In the first game of a doubleheader at Crosley Field, in scorching 97-degree weather, right-hander Church drew the starting assignment from manager Luke Sewell in his 10th game of the month. The Reds were in sixth place, already well out of contention for the league lead.

The Cubs countered with 24-year-old Johnny Klippstein, who was 4-5 coming into the game. Under manager Phil Cavarretta, they were in third place, 11 games behind league leader Brooklyn. Chicago had suffered a nine-game losing streak that ended five days earlier.

First baseman Dee Fondy got the Cubs on the scoreboard first with a solo home run in the top of the first. The Reds bounced back in the bottom of the frame with two runs coming on singles by Grady Hatton and Joe Adcock. Altogether the Reds had four hits and a walk off Klippstein.

In the bottom of the second, the Reds scored another run on a quirky play that involved back-to-back singles. Cal Abrams singled with two outs. When Bobby Adams singled, Abrams initially made an attempt to reach third base. Then he changed his mind and retreated to second only to find Adams headed there. In the Cubs’ attempt to get Adams out as he ran back toward first base, Abrams wound up scoring.2

Fondy led off the top of the fourth inning with a double and scored on Toby Atwell’s single to score the Cubs’ second run.

Klippstein started the fifth inning with the Cubs behind, 3-2. He gave up singles to Bob Borkowski and Adams, then retired Hatton on a pop fly. Ted Kluszewski singled to score Borkowski. Cavarretta brought in Willie Ramsdell to replace Klippstein. Willard Marshall’s grounder to second scored Adams, while Wally Westlake, running for Kluszewski, went to second. Adcock’s single scored Westlake, and it was 6-2, Cubs.

With Bob Schultz in the game for Ramsdell in the bottom of the seventh, Marshall’s single drove in Adams.

After Andy Seminick and Roy McMillan singled to lead off the bottom of the eighth, Church aided his own cause by singling and driving in Seminick.

Through the eighth inning, Church had largely been in control of the game, having allowed only two runs on eight hits with no walks. With a comfortable 8-2 lead, he started the ninth by retiring the first two Cubs batters, and it appeared he was on the brink of a complete game for his first win of the year.

However, a collapse by Reds pitchers ensued. Church gave up a double to Bill Serena and issued his first walk, to Roy Smalley. Gene Hermanski batted for pitcher Joe Hatten, and hit a broken-bat single to score Serena. Eddie Miksis’s bunt to third was fielded by Eddie Kazak, whose throw home was wild. Smalley scored on the play.

Frank Smith took over for Church and hit his first batter, Hal Jeffcoat, loading the bases. Fondy followed with his third hit of the game, driving in Hermanski and Miksis. Hank Sauer missed a home run by inches and had to settle for a double that scored Jeffcoat and pulled the Cubs within one run of the Reds.

Ken Raffensberger, who was normally a starter, replaced Smith. He loaded the bases when he intentionally walked Bruce Edwards, pinch-hitting for Atwell. Sewell used his third pinch-hitter of the inning, Johnny Pramesa, a former Red batting for Bob Addis. Pramesa hit a single that scored the Cubs’ final two runs and put them ahead 9-8. Altogether, six of the seven runs scored by the Cubs were unearned.

Dutch Leonard pitched the ninth for the Cubs and secured the win. Hatten, who relieved Schultz in the eighth inning, got his fourth win of the season. Smith took his sixth loss. The heat likely contributed to a total of eight pitchers being used, five by the Cubs.

Fondy was the Cubs’ offensive star of the day, going 3-for-5 with three RBIs. Adams got three hits and scored three runs for the Reds.

Church got a complete-game win in his next start, against Pittsburgh, and followed that with four straight losses, then four straight wins. He finished the season with a 5-9 record. For the rest of his career, he was unable to rebound to the form he demonstrated during his first two seasons.

In the second game of the doubleheader, the Reds again built an overwhelming lead, but didn’t allow the Cubs to mount another comeback. The Reds won, 9-1, behind Harry Perkowski’s four-hitter.