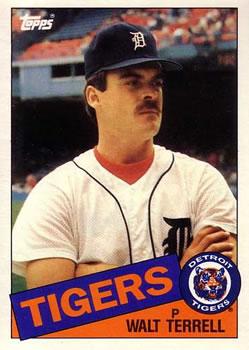 Baseball has experienced a dramatic increase of strikeouts over the last few decades. Pitchers are throwing harder than ever, and batters have drifted toward an “all or nothing” approach.1

Among this trend’s consequences are a dwindling species of pitching performances, once fairly common but now scarce: games in which a team fails to record any strikeouts. Occurrences of zero-strikeout games by major-league teams declined from 71 in 1980, to eight in 2010, to — as of 2021 — none since the Minnesota Twins had no strikeouts in a game in September 2017.2 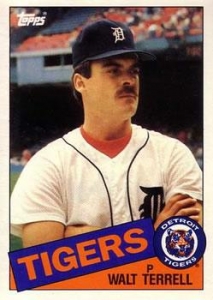 Rarest of all — and possibly extinct — are games with no strikeouts from either side. From the turn of the twentieth century through the 1970s, the frequency of games with no total strikeouts decreased considerably, from two to three per year to one or two per decade.3 As of 2021, the last instance of a game in which no batter was retired on a called strike three, a swinging strike three, or a bunted third strike was in 1985.

On June 29 of that year, the Tigers’ Walt Terrell matched up against Toronto’s Luis Leal. While neither pitcher could be confused for Nolan Ryan, they weren’t extreme “pitch to contact” guys either.

Terrell had seen his strikeouts per nine innings rate (K/9) increase each year since his debut with the New York Mets in 1982. Traded to Detroit in December 1984, less than two months after the Tigers defeated the San Diego Padres in the World Series, the 27-year-old right-hander came into the game with an 8-3 record, 4.32 earned-run average, and 56 K’s in 93⅔ innings, good for a K/9 rate of 5.4.

The first-place Blue Jays, at 45-27 with a 3½-game lead on the second-place Tigers in the American League East, were striking out roughly five times per game. Detroit, with a record of 40-29 coming into the contest, struck out approximately 5.5 times each game. Thus, there was every expectation that some strikeouts would be seen by the crowd of 47,965 at Tiger Stadium on this Saturday night.

Leal, pitching for the first time in 11 days after being skipped a turn in the rotation, yielded a run in the first on two hits and a walk, then served up a solo homer to Chet Lemon in the second. He managed to get through the third with only a two-out walk.

In the fourth, however, having recorded six of his first nine outs in the air, Leal saw a baseball fly through the night sky into the Tiger Stadium stands for a leadoff homer by Dave Bergman. After Lemon followed with a single, Leal’s night was done. Three-plus innings pitched, three runs, six hits, two walks, two homers — and no strikeouts.

Leal was relieved by righty Dennis Lamp, a multi-inning workhorse in the middle of what turned out to be a 16-season major-league career.4 Lamp entered the game with 29 strikeouts in 42⅔ innings, good for a K/9 rate of 6.1. Surely he might sneak a fastball by someone for strike three?

Lamp hurled three innings, facing 12 batters. While he stranded the runner he inherited from Leal in the fourth, he was touched for two runs in the sixth on singles by Larry Herndon and Lemon and a two-run double by Tom Brookens.

While Leal attained his outs through the air, Lamp achieved his on the ground. In his three innings of work, Lamp tallied seven outs on grounders and another out via a pickoff. But still, no strikeouts.

Having completed the sixth inning, Lamp handed off to Ron Musselman with the Jays trailing 5-0. Musselman was a 30-year-old righty with command issues. But he did manage to strike out 18 batters in his first 32 innings that year, good for a 5.1 K/9 rate.

He was rudely greeted by Kirk Gibson, who homered to push the deficit to 6-0. After consecutive walks to Lance Parrish and Darrell Evans, Musselman settled down and got the next three batters on two fly balls and a groundout. In the eighth inning, he yielded two more runs on doubles by Brookens and Gibson and a single by Parrish. He managed to get through the frame trailing 8-0, and still no Tiger batter had been retired via the K.

Meanwhile, on the Tigers pitching ledger, Terrell was breezing through the Blue Jays lineup, in stark contrast to his last matchup with them, on June 7, when he yielded eight runs and 11 hits in 4⅓ innings. This time he allowed only five baserunners the entire evening and faced only three over the minimum, recording his second complete-game shutout in 16 starts as a Tiger.5

Thirty batters came to the plate against Terrell. Two walked, two got hits (including Lloyd Moseby’s first-inning double, which turned into an out when the Blue Jays’ center fielder tried to stretch it into a triple), and one reached on an error. Terrell gathered 13 outs through the air and another 13 on the ground in his first career two-hitter. But he too failed to send any opposing batter back to dugout on strike three.

After the game, Terrell didn’t seem too concerned with the lack of punchouts, or too boastful about the two-hitter he had pitched. He instead praised Detroit’s defense behind him, saying, “… as long as I win, I don’t care how many hits they get. They can hit 27 balls to the wall, as long as they’re caught. As long as I get them out and win, I’ll take them. To me, it wasn’t a two-hit game. The guys really made some plays behind me.”6

Terrell pitched three more complete games that season, recording no fewer than three strikeouts in any of them. He finished 1985 at 15-10, with his .600 winning percentage being the best of the starting rotation, as the Tigers fell to third place in the AL East, 15 games behind the division-winning Blue Jays. Back with the Tigers in May 1991, after stints with the Padres, New York Yankees, and Pittsburgh Pirates, Terrell pitched another complete game with no strikeouts, this time against the Milwaukee Brewers.7

Terrell’s complete-game shutout of Toronto in 1985, when combined with the similarly strikeout-free ledgers of the Blue Jays’ three pitchers, stands out as last of the line among major-league games with nothing but zeroes under its box score’s “SO” column. On that night, a combined 71 batters came to the plate with nary a strikeout. Pitch data is not regularly available for seasons before 1988, so it is difficult to know how many “almost strikeout” two-strike counts the four pitchers totaled in this game. One newspaper account of the game did mention that Bergman’s homer came on a full count, but there obviously had to be other “almost strikeout” situations. The way the game is played today, we may never see another like the one between the Tigers and Jays on a Saturday night in late June of 1985.

1 Tim Kurkjian, “How the ‘K’ Became the Most Destructive Letter in Major League Baseball,” ESPN.com, May 19, 2021, available at https://www.espn.com/mlb/story/_/id/31454952/how-k-became-most-destructive-letter-major-league-baseball.

2 The author used the “Team Pitching Game Finder” search function on Stathead.com to identify games meeting this description. The Twins struck out no Kansas City Royals in a 4-2 win in Kansas City on September 7, 2017.

3 The author used the “Team Pitching Game Finder” search function on Stathead.com to identify games meeting this description; the search found 267 National League, American League, or Federal League games since 1901 with no strikeouts. Prior to the Tigers-Blue Jays game discussed in this article, the most recent major-league game without any strikeouts had been the Los Angeles Dodgers’ 5-1 win over the Atlanta Braves on April 14, 1978.

4 The game marked Leal’s final major-league appearance. He was demoted to Triple-A Syracuse a week later and traded to the Braves just before spring training in 1987.

5 Terrell had blanked the Milwaukee Brewers, 4-0, on April 28. He recorded four strikeouts in that game.