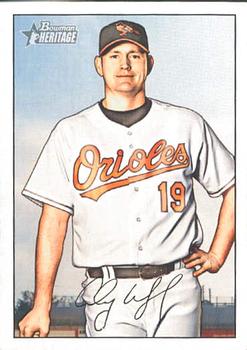 Using the minimum four at-bats needed, Aubrey Huff hit for the cycle on June 29, 2007, becoming the first Baltimore Orioles player to do so in a Baltimore ballpark. Along the way, he collected his 1,000th career hit. Despite Huff’s personal milestone performance, his club squandered a lead late in the game and the Orioles fell to the Anaheim Angels, 9-7, in front of a wild crowd of 36,689 at Camden Yards.

Before Huff had even entered the batter’s box, his Birds were down, 5-0, to Anaheim. Steve Trachsel, Baltimore’s starting pitcher, struggled on this Friday evening. Both Huff and Trachsel were in their first seasons with Baltimore, each having signed as free agents.1 Trachsel’s counterpart for Anaheim, Kelvim Escobar, fared slightly better, lasting 4⅓ innings.

The Angels had pounced in the top of the first, as Chone Figgins started the attack with a ground-rule double on the second pitch of the game. Orlando Cabrera singled him home, and the Angels had a quick lead. In the top of the second, Howie Kendrick hit a leadoff single to center. Kendrys Morales followed with a single to left. Kendrick raced to third, but Morales was cut down trying to stretch the hit into a double. Trachsel then uncorked a wild pitch, and Kendrick scored. After Mike Napoli flied out, Trachsel served up consecutive singles to Robb Quinlan, Figgins, and Cabrera, the latter plating Quinlan. Vladimir Guerrero then doubled to center, and the lead had grown to 5-0. Trachsel’s night was over as Orioles skipper Dave Trembley made the slow walk to the mound. Rob Bell came on in relief.

In his first at-bat, in the bottom of the second inning, Huff sent a 2-and-1 offering from Escobar to right-center field, and the ball careened off the scoreboard back into the middle of the outfield, allowing Huff to reach third base. It was his second triple of the season and only the 12th in his eight big-league seasons.2 “Obviously, as a 235-pound fat guy, to get a triple out of the way, that’s something that’s in the back of my mind the whole game,”said Huff.3 Teammate Kevin Millar told him, “You’ve got to get that cycle for all the fat guys out there.”4 Melvin Mora followed with an RBI single, a weak grounder between third and short, and Baltimore had a run on the scoreboard.

In the fourth inning, Huff sent another Escobar offering to right-center field, this time for a double. Mora followed with a deep home run down the left-field line. In the fifth, with a run in and runners at the corners, Huff launched a homer over the right-field fence for his third hit of the day. The three-run shot gave the Orioles a 7-5 lead. When Mora kept the rally going by doubling to left, Escobar was finished for the day. Chris Bootcheck was called from the bullpen.

Scott Williamson became the Orioles’ hurler to start the seventh. After retiring Figgins on a groundout, Williamson served up a home run to Cabrera, a shot deep into the left-field stands. A batter later, Jamie Walker was called to the mound for pitching duties, and after yielding a single to Gary Mathews, he was able to get the final out of the inning with Baltimore still ahead, 7-6.

In the bottom of the seventh, Huff approached the batter’s box to a standing ovation from the crowd. The Camden Yards fans sensed that something special would happen. Huff even mentioned it after the game, saying, “Before I even went up to the plate, the crowd was going pretty crazy. I didn’t even think anybody really noticed.”5 With the count 1-and-1, Huff drilled a ball down the third-base line, a sure double, but it landed inches foul. Huff said later that he wouldn’t have stopped at first, even to complete the cycle. “In that situation, I’m going two [bases]. I feel like you cheat the game if you stop at first. I wouldn’t even count that as a cycle.”6 The foul ball made it a nonissue. Huff swung at the next pitch and deposited a single in front of center fielder Matthews. He had joined the club of batters who have hit for the cycle and told reporters, “For me, this is probably one of the most special days of my baseball career. The triple was my 1,000th hit, the double was my 200th double and we’re lucky enough to get the homer back from a fan. So I got all of the four balls. It’ll be a pretty good memento.”7

After the single, manager Trembly, who routinely pulled Huff in the late innings for defensive purposes, replaced him with pinch-runner Brandon Fahey. Huff came back onto the field for a curtain call, tipping his helmet to the roaring fans. He later said, “This is a great tradition for baseball. … To be able to do that and be the only guy to do that [in Baltimore], that means a bit more.”8

But Huff’s memorable evening did not lead to a Baltimore victory. In the top of the eighth inning, Chad Bradford, the fifth Orioles pitcher of the game, quickly retired Kendrick and Morales with groundballs, but then walked Napoli. Erick Aybar hit for Quinlan and Bradford plunked him with a 1-and-2 pitch. Figgins, Anaheim’s hottest hitter, singled to right and Napoli scored the tying run, saddling Bradford with a blown save.

In the ninth, closer Chris Ray came in for the O’s, and he hit Guerrero to start the inning. Matthews forced Guerrero at second and Casey Kotchman flied out to left. On a 1-and-0 count, Kendrick smashed a home run beyond the fence in deep left-center field. His 420-foot game-winning blast spoiled Huff’s night. After the game, Kendrick said, “Honestly, I was trying to get something over the plate, put a good swing on it and get a hit. It just happened to be a home run. It’s a crazy game. I could go back out a thousand times and not have that happen.”9 Angels closer Francisco Rodriguez pitched the bottom of the ninth, retiring Nick Markakis, Ramon Hernandez, and Fahey on fly balls to center, right, and left respectively, for his 23rd save of the season.

Through 89 games in the season, the Orioles had lost 10 times when leading after the seventh inning.10 The team fell to 34-45, 15½ games out of first place. Trachsel’s ERA jumped from 3.39 to 4.95 in the month of June. In this contest he gave up nine hits to 12 batters. He escaped with only five earned runs, as the Baltimore defense erased two Angels runners in rundowns. Baltimore did get Trachsel off the hook by scoring seven runs, but then the bullpen faltered. Bell tossed 4⅓ scoreless innings, and Williamson, Walker, Bradford, and Ray allowed only four hits in their three innings of work but walked one and hit two batters. Anaheim capitalized, scoring four times. Had the bullpen been able to hold the lead, Bell would have won his first game in more than two years.

Figgins went 4-for-5 for the Angels with three singles and a double, a run batted in, a stolen base, and two runs scored. According to the Los Angeles Times, Figgins posted the second highest monthly batting average in Angels history with a .458 clip in June (Bengie Molina had batted .461 in May 2000).11 In 25 games, Figgins was 51-for-111 and raised his average from .133 at the end of May to .322. His teammate Cabrera also had a productive game with three hits and three runs batted in. After this win, the Angels were comfortably in first place in the AL West, with a record of 50-30.

Huff raised his average 10 points in this game, to .272. With his home run in the fourth inning, Mora had a 3-for-4 game, falling short of the cycle by a triple. Mora and Huff had driven in six of Baltimore’s seven runs. Huff became the third Oriole to hit for the cycle, joining Brooks Robinson (July 15, 1960) and Cal Ripken Jr. (May 6, 1984), but Huff was the first Baltimore player to accomplish the rare feat in front of his home crowd.

In addition to the sources mentioned in the Notes, the author consulted Baseball-Reference.com, mlb.com, and Retrosheet.org. The author sincerely thanks Meg Gers and the Enoch Pratt Free Library for assistance in obtaining sources from the Baltimore Sun.